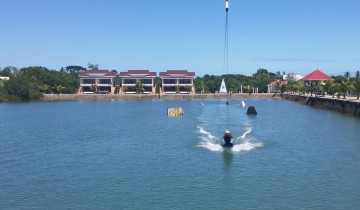 You stand or kneel on a board at a platform built on the shallows, hold on to a cable for dear life, and go skim over the sea in a water sport called wakeboarding that’s gaining popularity in Cebu.

One of the places that offer wakeboarding activities is the Cebu Wake Park inside the Papa Kit’s Marina and Fishing Lagoon.

Wakeboarders met with other board riders last Saturday, February 7, at Papa Kit’s to launch the Cebu Boardriding Community, for now an informal grouping of 670 members.

At the Cebu Wake Park, the wakeboarding and wakeskating facility uses a 2.0 system that pulls the rider in a straight line from one point to another and back again, explained Helmut Estremos.

Along the way, there are ramps called sliders or kickers that wakeboarders can glide on or jump from and execute difficult maneuvers.

According to Estremos, who works at the Cebu Wake Park, wakeboarding is when you use a board with shoe attachments and wakeskating is when it is just a plain level board.

One hour at Cebu Wake Park costs P400 on weekdays and P500 on weekends. The fee already includes the use of equipment and guidance from an instructor, especially for beginners to the sport.

DRONE SHOT. Members of the Cebu Boardriding Community pose for a drone shot at the Cebu Wake Park inside the Papa Kit’s Marina and Fishing Lagoon in Liloan.

Many of Cebu’s boardriders started with skateboarding and transitioned into other board sports, said Boeing Paras.

Paras, one of Cebu’s pioneers, started skateboarding in 1990 and went into surfing in 2003.

Like Paras and the others, Francs Daryl Abella, who is now into wakeskating, had once been into skateboarding.

He explained that once you have a feel for and balance on a board, it’s easier to take up a sport that uses a similar equipment.

CEBU WAKE PARK. The wakeboarding and wakeskating facility in the Cebu Wake Park uses a 2.0 system that pulls the rider in a straight line from one point to another and back again.

“When you know how to skate, the transition to surfing for example is faster,” added Paras. There really are areas in Cebu where surfing is possible, he said, citing Carmen in the north and San Fernando in the south.

Surfing is possible when the north wind (amihan) blows and create swells in Carmen, which usually happens from December up to March, and the south wind (habagat) does the same in San Fernando from June until October.

Paras said they hold a 5-day surfing camp in Lanuza, Surigao del Sur every April for only P9,800. The camp is on its sixth year now.

Another surfer, Carlo de Asis of the Aframe Surf Company, said a lot of those who surf and join competitions in Lanuza come from Cebu. Aframe manufactures made-to-order surfing boards in Talamban, and de Asis said the price ranges from P16,000 to P25,000.

WAKEBOARDING FEE. One hour at Cebu Wake Park costs P400 on weekdays and P500 on weekends.

Quisan said they’ve also invited longboarders to join the community. The idea to create a group for boardriders came about during the Lazion Skateboarding Competition in October 2014.

“We invited and asked for the support of the wakeboarding and surfing community and they showed up during the competition. It was then that we discussed the idea of creating a community,” he added.

They started organizing the Cebu Boardriding Community by creating a Facebook page in November and holding a soft launch in December. Quisan said they’re still compiling requirements for the group’s registration with the Securities and Exchange Commission (SEC).

He added that boardriding sports are becoming popular in Cebu, especially since there are wakeboarders, skateboarders, and surfers who’ve won competitions and caught the interest of sponsors.

FOR BEGINNERS. The fee charged by the Cebu Wake Park covers the use of equipment and guidance from an instructor, especially for beginners to the sport.