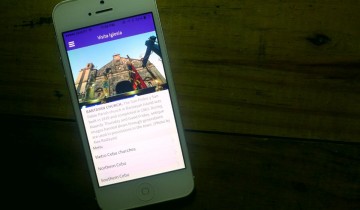 Are you planning to visit seven churches this Holy Week in observance of the religious tradition Visita Iglesia?

Cebu-based journalism startup InnoPub Media, in partnership with Smart Communications, Inc. and the Archdiocese of Cebu, provides you a handy guide to the heritage churches in Cebu with the release of an updated version of its Visita Iglesia mobile phone app.

The app is available for download on iOS, Android, and Windows devices.

If you’re planning to observe the traditional Visita Iglesia or simply after visiting Cebu’s Spanish period stone churches, let the Visita Iglesia app guide you to where the structures are located in the province.

Visita Iglesia App. The app, available for iOS, Android and Windows Phone, is a handy reference to the heritage churches of Cebu.

The app also provides historical and current information on centuries-old churches scattered across the whole span of the island, from its southern to northern tip.

Learn more about Cebu City’s Basilica del Sto. Nino, Boljoon’s Nuestra Patrocinio de Maria Church, or Sts. Peter and Paul Church in Bantayan as you visit these structures during Lent or any other time through the information provided in the app.

More churches are featured in the app’s latest version.

The program includes the production of mobile phone apps and ebooks that are offered for free download to serve as guides to tourists. The program also includes the installation of interactive tourism markers that contain a QR or quick response code and NFC or near-field communications sticker to trigger the download of historical, cultural and tourism information into mobile devices.

Digital Tourism was pioneered in Cebu but is now also in Iloilo and Baguio City and is set for launch in Albay and Intramuros. The program was commended on mass motion by the Cebu City Council in January 2012 as an “ingenious way” to deliver tourism and historical information. It was also a recipient of an Anvil Award of Merit during the 49th Anvil Awards held last February 26, 2014.

Some government officials recommended actions that the public can do beyond last Saturday’s Earth Hour. About 250,000 nurses are needed in Germany in the next…