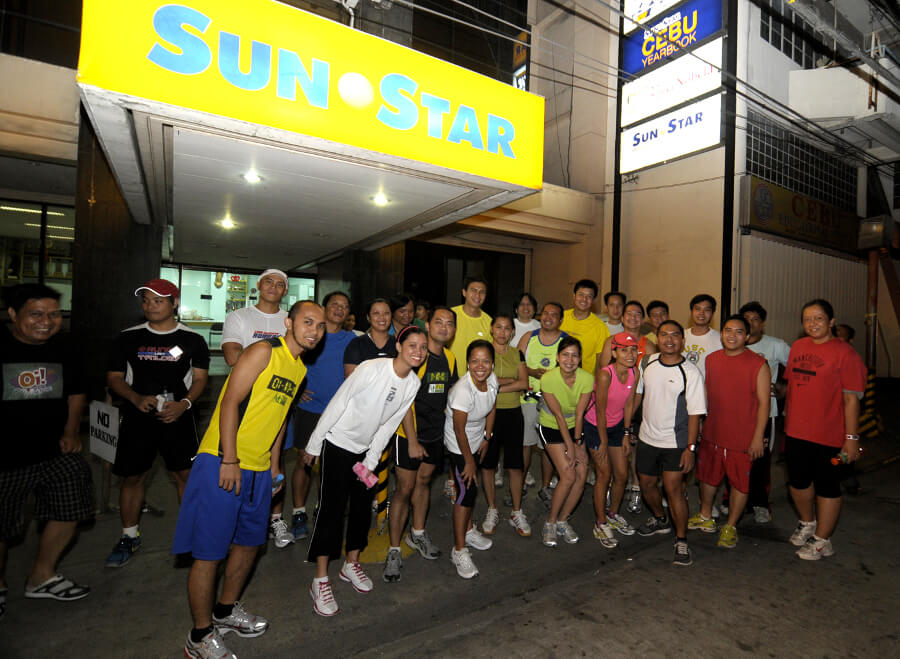 On Friday nights, Sun.Star Cebu executive editor Michelle So works in running shorts. At 9 p.m. managing editor for news Isolde Amante and news editor Charmaine Rodriguez go through the last few news stories and prepare to close the remaining news pages before changing to their jogging pants or running shorts.

At that time, reporters Justin Vestil, Linette Ramos and Rene Martel have finished writing their stories and are now in running attire. Graphic artist Kent Ynot and Ariel Catubig of the Sun.Star Network Exchange are also ready to go.

Outside the newsroom, men in tights sit on the steps of the stairs talking to one another. Dr. Raymund “Reel Runner” Bontol accompanies a large group of runners, among them Jefferey Chua and Ralph Noval, from the Cebu Velez General Hospital, and gives tips on running. Aeda Mae Siao, meanwhile, accompanies a friend who is on her first night run.

WE OWN THE NIGHT. Ungo runners in front of the Sun.Star Cebu office before running to the It Park in Lahug, Cebu City

In the newsroom, Teddy Espinueva and his wife Belle and cousin Bikik Besavilla stand waiting, the reflective patches stitched to their clothes and caps shimmering.

On Fridays, you’d have gynecologists Eleanor Casquejo, Humility Igaña and Vilma Pesa fidgeting, waiting for the run to start while praying none of their patients suddenly go into labor.

Joe France Cañizares and Cadjing Pelicano of Waterfront Cebu City Hotel tower above everyone else while mingling with the runners. Rounding up the group are veteran runner and now race organizer Kenneth Casquejo, Ramie Igaña, Charles Su and 17-year-old student Anthony Gabriel Tuldanes.

A few minutes after 10 p.m., the group goes down to the Don Pedro Cui St. exit of the Sun.Star Cebu office and hams it up for the night’s designated photographer, usually Sun.Star Cebu chief of photographers Alex Badayos. Last week, we had Philippine Blog Awards winner Estan Cabigas, a newbie runner himself.

At the word “go,” the runners group themselves according to their running paces. Bontol, Igaña and Abby Ponce are typically in the lead pack. My wife, Marlen, would be in the middle and I’d typically run with her. But I usually sneak in a speed training by serving as running marshal, going from lead pack to the middle pack to the runners who choose to enjoy the scenery and go at a leisurely pace.

FRIDAY NIGHT ROAD PARTY. Runners gather at the Sun.Star Cebu office on P. del Rosario St. for the weekly Friday night run to the IT Park in Lahug.

Like most people, we look forward to party on a Friday night, only ours is on the road.

Instead of laser lights setting the mood, we’d have the monotonous blinking of bicycle lights clipped to our waistbands. Instead of tequila, we down coffee.

We run in the rain.

We call ourselves ungo runners after that Bisaya word and its double meaning—the noun for that creature of superstition that comes out in the dark and the adjective to mean addict. We are running addicts who run at night.

The group started with just Marlen and me on our Friday night road dates. We later invited newsroom colleagues. The group later grew larger.

This Friday, we’ll take to the streets again.

See you on the road.

Cebuanos love to bargain. In Cebu, bargain means Tabo sa Banay. Tabo is a Cebuano word for gathering or the verb to meet or to…

The names of places come out in a staccato, wheezing whisper barely heard through the disco music booming from large speakers at the Cebu City…