It took longer to reach some of Bohol’s popular tourist spots and attractions because of the damage to some roads and bridges but they are open and welcoming visitors again.

The drive to the famous Bohol destination named Chocolate Hills took two hours because of road diversions and the viewing deck built atop one of the 1,268 mounds was destroyed by the 7.2-magnitude earthquake on October 15, 2013.

Fortunately, another observatory had been constructed in Carmen before the quake. 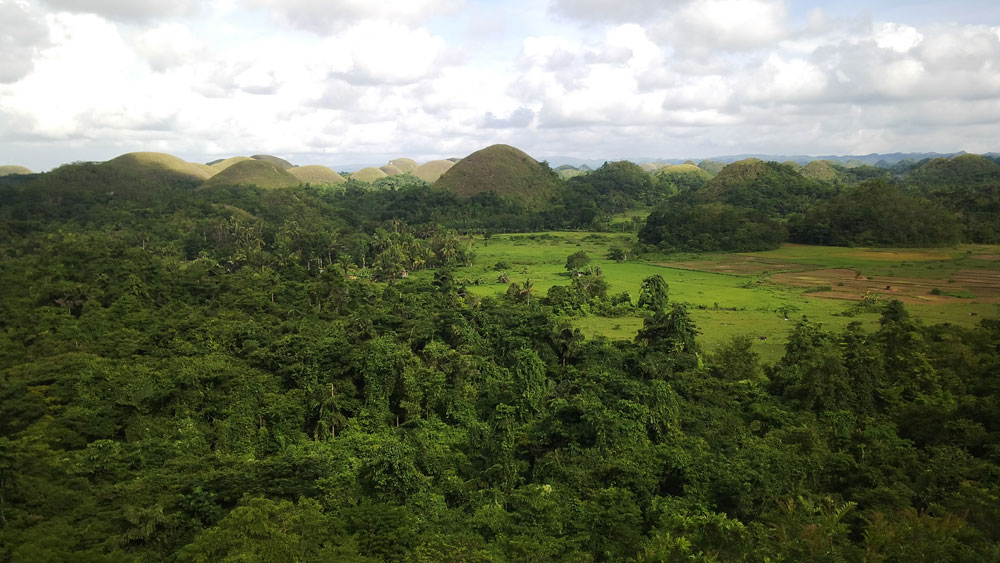 Bohol’s rolling terrain of haycock hills can be seen from an observatory at a recently owned establishment called the Chocolate Hills Adventure Park.

From this new viewing deck, which is accessible by climbing a stairwell of 248 stone steps built on the side of a hill, we had a clear view of the rolling terrain of mounds spread out over the towns of Carmen, Sagbayan, and Batuan. 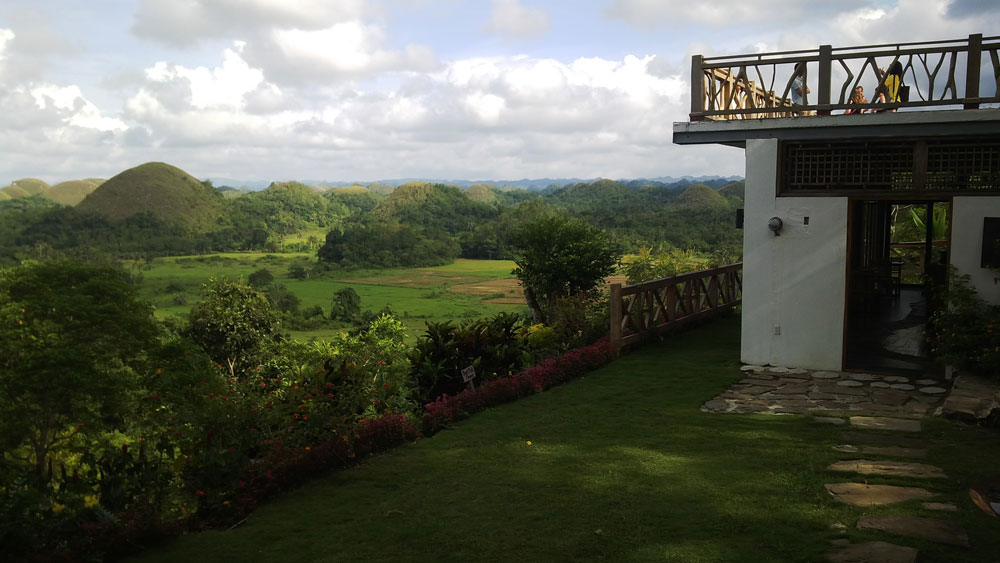 The two-level viewing deck in Chocolate Hills Adventure Park can be reached by climbing 248 stone steps carved on the side of a hill.

The Chocolate Hills Adventure Park was preparing for a full opening later this year when the earthquake happened and destroyed the government-built viewing deck, said the facility’s local guide Roy Noroño.

Since the park was only alternative observatory in Carmen, local travel and tour operators began bringing tourists there after the quake. 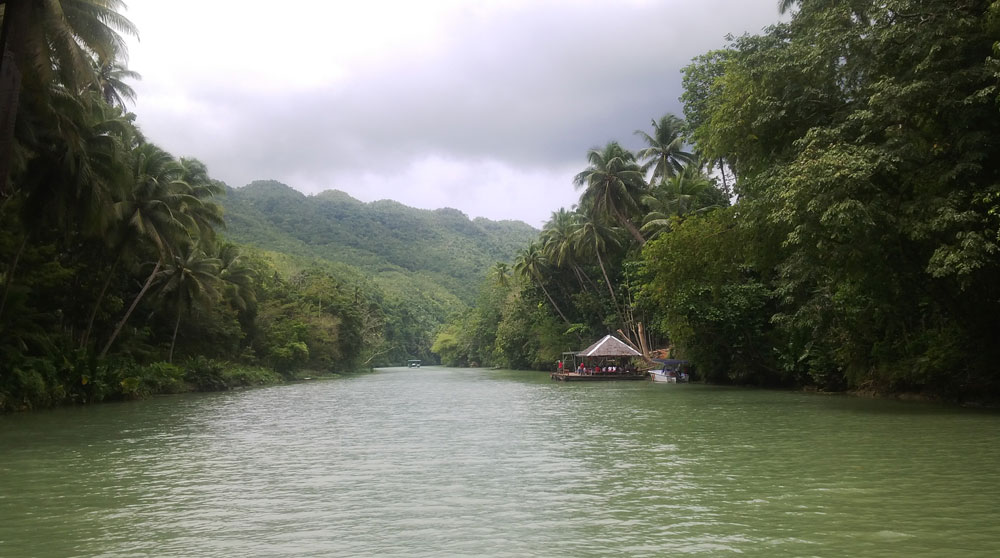 The Loboc River Cruise takes tourists on a raft tour of this side of the river.

Noroño said they get as many as 100 to 200 visitors daily now that tourists have returned to Bohol. The park charges an entrance fee of P60 per person who is 35 inches or more in height.

From the park, we can make out the damaged observatory built on top of one of Bohol’s Chocolate Hills.

Another Bohol attraction is the Loboc River Cruise and it has restarted its midday rides along the river on colorful roofed rafts as of October 24. The cruise costs P450 per person and comes with a buffet lunch taken as the raft makes its way along the Loboc River.

The night cruises have not been reinstated, said tour guide Cecile V. Remolador, adding that visitors even before the quake had preferred the noon tour. She cited she does not think that tourists would want a cruise in the dark especially after what happened. 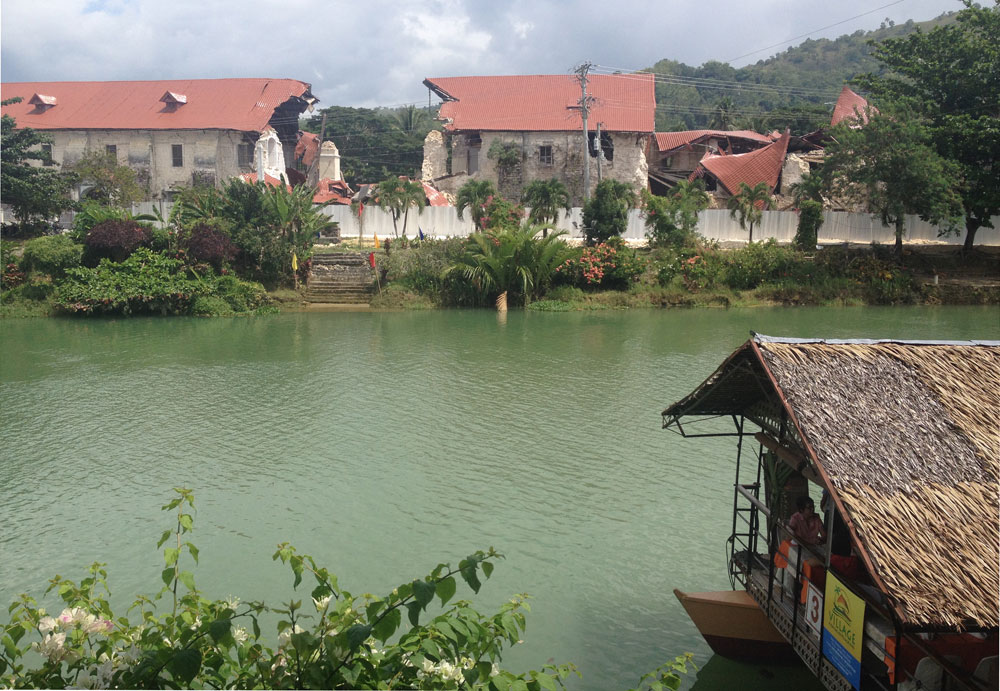 The destruction wrought by the earthquake on the heritage church of Loboc can be clearly seen from the starting point of the Loboc River Cruise.

Loboc is about 30 minutes from Tagbilaran City and there are many jeepneys that ply this route. Visitors who are interested in commuting to Loboc can get a ride at the jeepney terminal in Tagbilaran.

As our raft made its way toward the river source, we saw houses with cracked or toppled walls, damaged porches or kitchens, and ruined roofs. The saddest sight is the Loboc Church and rectory which collapsed in three areas, and we can clearly make out the gaping spaces where the walls used to be. 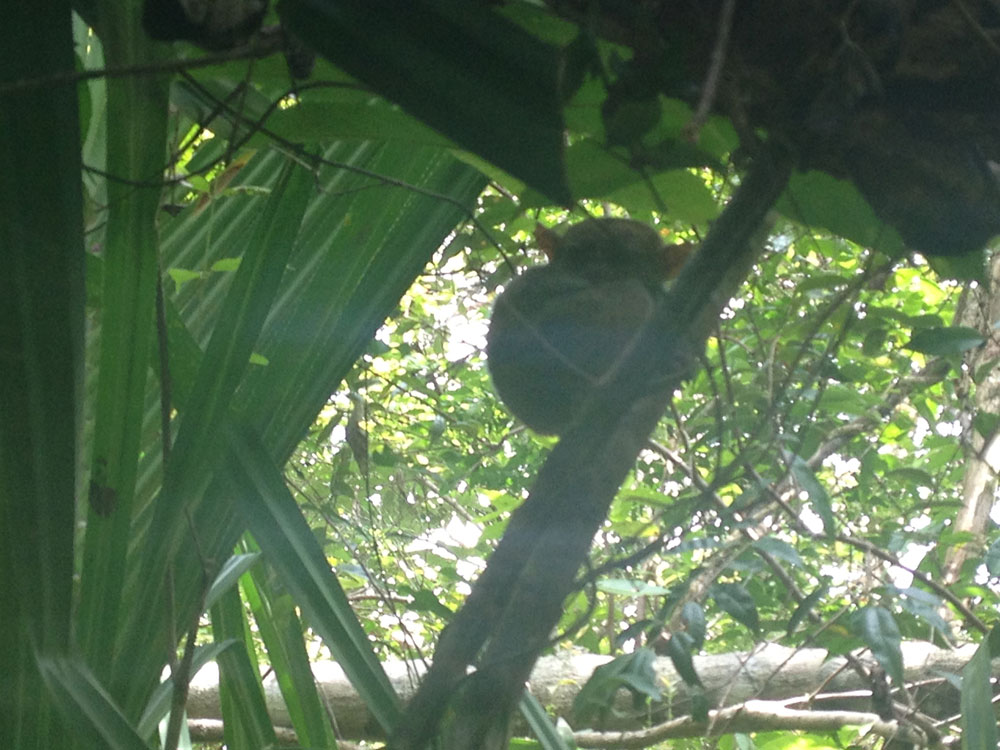 Tourists in Bohol get the chance to see the tarsier or maomang in its natural habitat during a tour of the Philippine Tarsier Wildlife Sanctuary.

One of Bohol’s famous attractions is the tarsier or what Boholanos call the maomang in the local dialect. The tarsier of Bohol lives in the forests of Corella and its habitat has been turned into the Philippine Tarsier Wildlife Sanctuary.

Of the 8.4-hectare tarsier sanctuary, one hectare has been fenced off for tourism and research purposes. Trained guides take tourists through a tour of the sanctuary and point out the tarsiers. 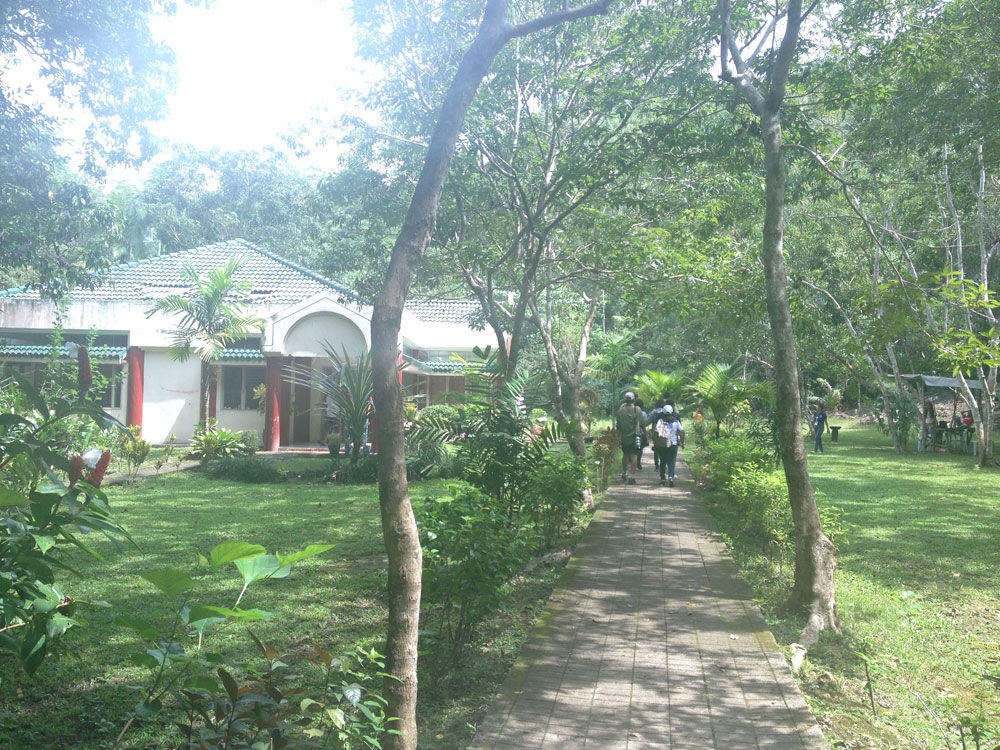 The Philippine Tarsier Wildlife Sanctuary spans 8.4 hectares but only a hectare is fenced for tourism and research purposes. At least 15 tarsiers live in this sanctuary.

We were allowed to take pictures but prohibited from using flash. The tour guides told us we must be quiet during the tour or we will disturb the nocturnal primates that measure only 4 to 5 inches in adulthood.

Entrance fee to the sanctuary is P50 per person. The town of Corella is only a few minutes away from Tagbilaran.

This centuries-old church of Our Lady of the Immaculate Concepcion is not anymore safe for tourists. 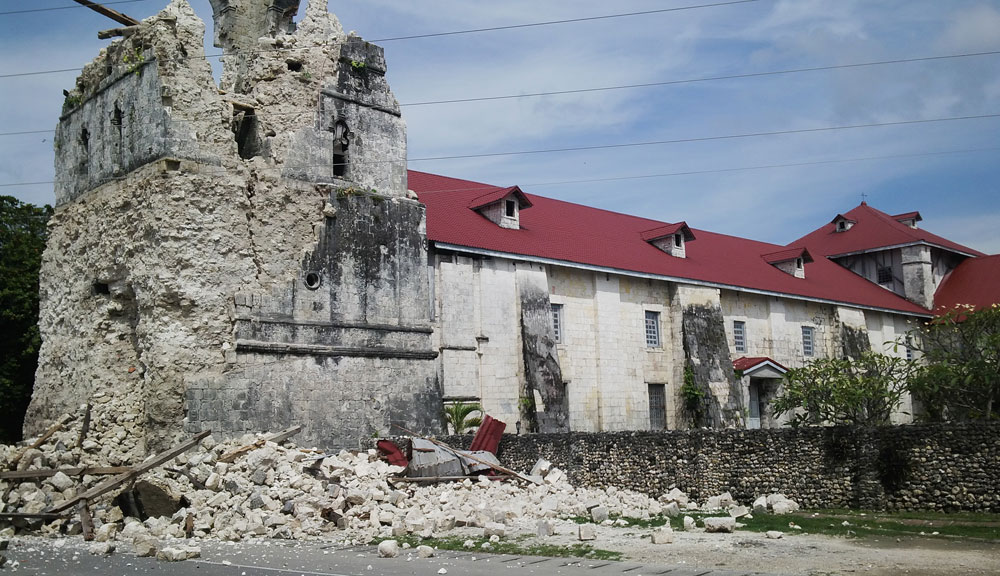 The centuries-old Baclayon Church, reportedly the second oldest in the country, was not spared by the quake.

Its belfry and facade collapsed during the earthquake and there are damages to the interior of the Baclayon Church as well, according to local guides.

Tourists however can look at the 1727 church from a distance and take pictures. A visit to Baclayon Church, or what’s left of it, is still part of many Bohol circuit tours offered by local travel agencies.

Remolador said the cut coral stone blocks that make up the church walls were cemented together by a mixture of grounded adobe, sea sand, and egg whites. It is believed that finding uses for the egg yolks, according to Remolador, gave rise to the creativity of Boholanos in pastry-making.

Other Bohol attractions include the Blood Compact site in Barangay Bool in Tagbilaran City and man-made forest in Bilar. There are no entrance fees to these two sites. The Blood Compact Commemorative Shrine immortalizes the blood compact treaty between Spanish conquistador Miguel Lopez de Legazpi and Rajah Sikatuna of Bohol. The sculpture was created by national artist Napoleon Abueva in 1999. The blood compact or sandugo ritual requires the parties involved to mix blood droplets in coconut wine and drink it with arms entwined.

The Skiptrip Tour of Travel Village includes visits to all the Bohol attractions listed here.

April Labanon, Travel Village account executive, said the tour costs P2,850 per person for a minimum of two. The tour cost already includes round-trip fares for the Supercat ferry as well as terminal charges, transportation and applicable entrance fees to the Bohol attractions, a professional guide, and lunch during the Loboc River Cruise. Like other Augustinian structures built in the late 18th century in the Philippines, the San Miguel Arcangel or St. Michael the Archangel Church of Argao… 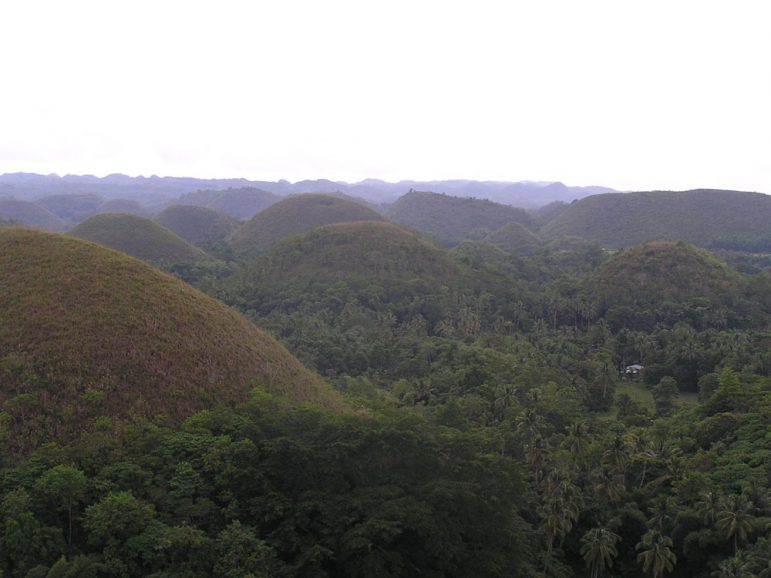