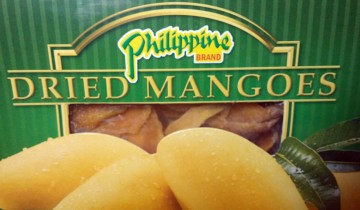 Are you travelling to Cebu for the Sinulog Festival 2015 celebration? It’s never too early to be on the lookout for the best pasalubong to bring home to relatives and friends.

Cebu is known for such native delicacies as dried mangoes, otap, rosquillos, and masareal. Many tourists consider them the best bring-home gifts.

The secret to getting the best products is to buy from the top manufacturers. Here’s a list of Cebu specialty products and where you can get them.

Although there are now many companies manufacturing dried mangoes all throughout the Philippines, Cebu has been known as the first and best source of this healthy and delicious snack.

The company has a big store and museum called the Profood Gallery at its factory in Maguikay, Mandaue City. The gallery serves both as mango museum, where you get to learn about the mango industry in Cebu, and gift shoppe, where you shop for dried mangoes and other Profood products.

Philippine Brand. This brand of dried mangoes is among the most popular in the market.

A tour at the Profood factory needs to be booked in advance. Here are the requirements and rates for the Profood Gallery tour. (Link: Profood Tour Booking)

Profood dried mango and other products are also available at big supermarkets and pasalubong shops in Cebu.

Dried mangoes and other Cebuano delicacies are also available at Islands Pasalubong. Aside from dried mangoes, Islands Pasalubong also carries other Cebuano specialties like otap, rosquillos, chicharon, and even dried fish or buwad. It also makes available native snacks like palitaw, sapin-sapin, puto, biko, budbud, kutsinta, fresh lumpia, pichi-pichi, ensaymada at the Pinoy Deli section. Since these are easily spoiled food, you may have difficulty bringing them home but you can certainly try any that suits your fancy.

There are currently six Islands Pasalubong branches in Cebu: Salinas Drive in Lahug (across Golden Cowrie), Cebu City; Marina Mall in Pusok and another in Punta Engaño, both in Lapu-Lapu City; Molave St. across Ayala Center Cebu on Archbishop Reyes Avenue side; Raintree Mall on Gen. Maxilom Ave.; and the flagship store on Magallanes St., which is in front of the Sto. Niño Church and Magellan’s Cross.

Otap is a crisp, flaky, and saccharine-coated biscuit that is a specialty of the Shamrock Bakery and Restaurant Corporation in Cebu.

Shamrock is the most popular Otap brand.

Its pasalubong centers are in downtown Cebu City at the corner of V. Gullas and Mabini streets, Don Gil Garcia Street in Capitol, Fuente Osmeña Circle, and along the national highway in the southern town of Barili.

IT HAS TO BE TITAY’S. If you want to buy rosquillos, make sure you pick Titay’s. (Photo taken from Titay’s Facebook Page)

Titay’s is synonymous with rosquillos, a favorite pasalubong and anytime treat that a young woman by the name of Margarita Frasco or Titay started baking in 1907. More than a century later, Titay’s oven continues to produce quality home-baked goodies using artisan methods and with Lola Titay’s well-guarded recipe. Titay’s products now include torta, penato, ensaimada, pastries, and assorted breads.

The store is Liloan but Titay’s products are sold in Cebu’s big supermarkets, pasalubong centers, and many other shops.

Didang’s Masareal is the most popular brand of this sweet confection made of ground peanuts and sugar syrup.

Masareal is a sweet confection made of ground peanuts and sugar syrup. It originates from Mandaue City, and one of the more popular brands is Didang’s Masareal.

Juliana “Didang” Suico went into the masareal business in 1914. Today, her brand continues to stand out. When Cebuanos are asked about the best masareal maker in Cebu, they refer to Didang’s. Aside from the main Didang’s store where you can buy fresh masareal, it is also available in Cebu supermarkets and pasalubong centers as well as the marketplace in Mandaue City.

Local shirts, especially ones that bear the names of the place visited, are favorite souvenirs. In Cebu, Islands Souvenirs is behind the “I Heart” campaign that allows customers to personalize their shirts.

Aside from Cebu, Islands Souvenirs has expanded the line to other key destinations such as Davao, Bohol, Manila, Boracay, Vigan, Camsur, Baguio, and Palawan.

The “I Heart” campaign has also transcended international boundaries as it has quickly become the favorite pasalubong of Filipinos living abroad. Islands Souvenirs has stores in SM City Cebu, Ayala Center Cebu and on the Airport Road.

ONE-STOP SHOP. Islands Pasalubong is a one-stop shop for all your pasalubong needs, including popular shirts by Islands Souvenirs.

Quality guitars are made and sold in Lapu-Lapu City much cheaper than at the malls. If you’re pressed for time and you want quality guitar, drop by the showroom (located shortly after you turn left from the First Mandaue-Mactan Bridge) along M.L. Quezon Highway in Lapu-Lapu City on your way to the airport. Several stalls sell quality-crafted guitars from various factories in Lapu-Lapu City.

Another option, if you have the time for it, is to buy from the guitar factories in Barangay Abuno, Lapu-Lapu City. You can find both backyard and established guitar makers in the barangay. The bigger ones are Inday Celia’s, Alegre, Lilang’s, Susing’s, and Jerry’s.

Tricycle drivers in Lapu-Lapu and taxi drivers know where the guitar factories are. If you’re bringing your own vehicle, then go straight from the old Mandaue-Mactan bridge until you reach Mactan Doctors’ Hospital where you take a left turn and continue on until H. Mall where you take a right turn straight for Abuno. You know you’re on the right track if you see a big guitar monument on the middle of a crossing as you turn right from H. Mall.

Lapu-Lapu Guitar. If you want to buy quality guitar at an affordable price, head to Lapu-Lapu City. (Photo provided by Lapu-Lapu City Hall)

Sinulog organizers say the visit by Pope Francis next week will impact Sinulog attendance. Those in Luzon or Leyte would likely attend papal visit activities…