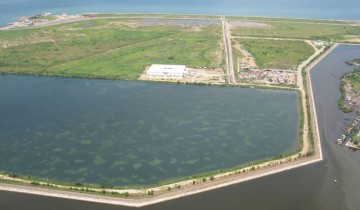 Politics is heating up in Cebu with elections less than a year away. In today’s news, former mayor Tomas Osmeña accused Cebu City Mayor Michael Rama of wasting government funds while Talisay City Mayor Johnny de los Reyes claimed 1st District Rep. Gerald Anthony Gullas asked students of the University of Visayas, which his family owns, to register in Talisay City. He described it as “hakot” or busing potential voters.

SOUTH ROAD PROPERTIES. An aerial shot of the SRP that former mayor Tomas Osmeña posted along with his criticism of how Mayor Michael Rama has handled the project and the city’s finances. (Photo taken from Osmeña’s Facebook page)

Osmeña, who conceptualized the SRP project, said that when he stepped down, he left behind P2.4 billion in City Hall.

Talisay City Mayor Johnny de los Reyes has accused 1st District Rep. Gerald Anthony Gullas of influencing students of the University of the Visayas, which is owned by the Gullas family, to sign up as Talisay voters.

De los Reyes, told Sun.Star Cebu, that they were surprised by the groups of students signing up at the City Election Office. He said that many of the students could not identify their barangays. He described this as “hakot” or busing in voters.

Gullas denied the allegation, which he described as offensive, and said the students merely sought his office’s help. Gullas manages UV’s basketball team and serves as assistant vice president for finance and administration.

“We have legal procedures to follow if he feels he has been offended by some UV students who would want to exercise their right of suffrage. To me, to forestall, at the least, or deny these students their political rights is offensive, if not irrational.” — Rep. Gerald Anthony Gullas as quoted, by Sun.Star Cebu.

Four people were killed in separate road accidents over the weekend in Toledo City and Argao and Dumanjug towns. A merchandise delivery truck fell into a river in Poog, Toledo City at past 11 a.m. Sunday, killing driver Oscar Layson and assistant Reymart Cañeza. The traffic investigator said the van’s brakes might have malfunctioned when Layson was traversing a curve.

Survivors of the Kim Nirvana-B sinking returned yesterday to Pilar, Camotes, their intended destination when the boat sank in bad weather on July 2. Coffins containing 45 bodies in white caskets were brought to the town by the BRP Batangas of the Philippine Coast Guard.

Provincial Disaster Risk Reduction and Management Officer Baltazar Tribunalo Jr. told Sun.Star Cebu that 36 of the caskets remained in Pilar while 7 were taken to Tudela and one each to Poro and San Francisco.

TRAGIC HOMECOMING. Workers bring to port one of the 45 caskets containing bodies of those who perished in the sinking last July 2. (Photo by Ryan Sorote of AksyonBisaya TV5)

The death toll in the accident is now at 61, with the retrieval Saturday night of 2 more bodies.

Sun.Star Cebu: With smallest insurance market in Asean5, Philippines ‘has room to grow’ for insurance

A shooting was reported early today in the IT Park in Lahug. Posts on Facebook by various users reported that the victim was shot in…

Update: Port Restaurant has postponed its July promo. We just received this announcement from assistant manager Tom Pitogo. Here’s his statement: Please be advised that…