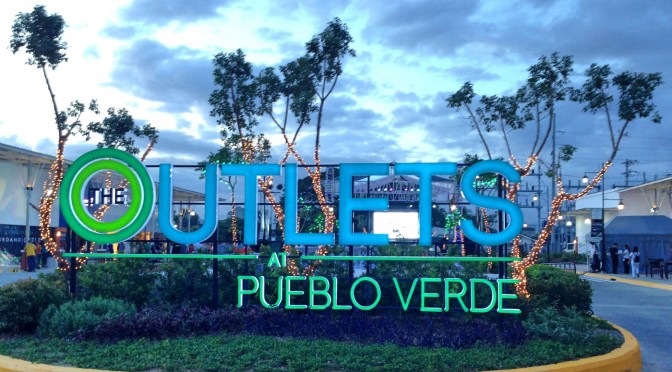 Running shoes at 50% off, shirts and jackets at 30% markdown and pants at 40% discount. These are some of the things sold at The Outlets at Pueblo Verde in Basak, Lapu-Lapu City.

It is an outlet store for such brands as Adidas, G-Force (which sells Reef and Oakley), Levi’s, Dockers, Giordano, Converse and Timberland.

Customers crowd the Levi’s outlet, which also sells Dockers apparel, in The Outlets at Pueblo Verde in Lapu-Lapu City. The Outlets is the first outlet store in Visayas and Mindanao where manufacturers directly sell goods to consumers at a big discount. (Photo by Max Limpag)

Outlet stores are shops where manufacturers directly sell items to consumers, at a lower price compared to those in retail outlets. The company said The Outlets is the only one of its kind in Visayas and Mindanao.

Shops at The Outlets sell products at discounts ranging from 20% to 75% off the whole year round, said de Mesa.

The Outlets will see a lot of tourism shopping, said de Mesa.

Radaza said The Outlets will complement the tourism push of Lapu-Lapu City. She said The Outlets is very near high-end resorts and hotels in Lapu-Lapu and is sure to draw foreign tourists. Radaza said she also projects a growth in domestic tourists with people from nearby towns and cities and even provinces going to Mactan to buy in the shops.

Shoes for running, basketball, tennis, football and other athletic gear are available for big discounts at the Nike Factory Shop in The Outlets at Pueblo Verde. Other athletic shops in the area include those of Adidas and G-Force (which sells Reef and Oakley products). (Photo by Max Limpag)

The Outlets has spaces for 22 outlet stores. Eight have opened, 14 more will open soon, de Mesa said. Giordano will open next week while Timberland will open next month. Shops are open from 11 a.m. to 9 p.m. every day.

De Mesa said The Outlets is located on a 1-hectare area and they are already looking into expanding by another hectare. The Outlets will include outdoor dining in the future, de Mesa said.

EVERYTHING AT P70. The Peso Store sells all items for P70. Their goods range from household items like soap, body butter, detergent, clothes hangers, clips, lotions, cleansers to specialty paper and clipboards. (Photo by Max Limpag)

When asked about the possibility of The Outlets opening in Cebu City, de Mesa said it is very unlikely because the big discounts offered by the shops will cannibalize sales of traditional retail outlets.

YEAR-ROUND DISCOUNTS. Rafael de Mesa, AboitizLand assistant vice president for project development, says shops at The Outlets offer items at discounts ranging from 30% to 75% the whole year. He said a store like The Outlets is unlikely to open near the city center because it would cannibalize sales of traditional retail outlets. (Photo by Max Limpag)

Cebu beauty product manufacturer GT Cosmetics is sponsoring the Miss Cebu 2014 pageant that will be held as one of Sinulog Festival activities this January….

Cebu and Bohol will be among the ports of call of international cruise ships in 2014 and 2015, a statement from the Department of Tourism…