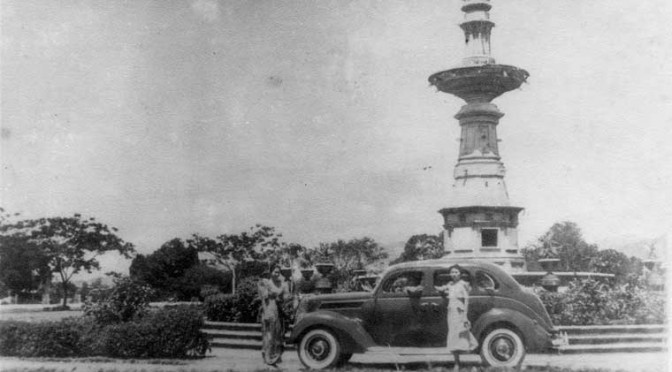 It’s hard to imagine today but the Fuente Osmeña circle was considered dangerous in the 1900s because it was far from the city center. Fuelling the fear in that period was what author Lucy Urgello-Miller described in her book “Glimpses of Old Cebu” as a “scandalous, melodramatic case” that happened in the area.

On the morning of March 22, 1915, two bodies bearing multiple stab wounds were found near Fuente Osmeña, Miller recounted in her book. The two were identified as Ramon Santiago and Natividad Garcia Reyes.

Santiago was single. Natividad, on the other hand, was married to Carlos Reyes, whose family owned Bazaar Rizal, which Miller described as one of the biggest stores in Cebu at that time. The two were rumored to be having an affair.

Carlos was in Manila during the killings. His brother Elias, friend Isidro Jureidini and three of Elias’s servants were accused of the murder.

Fuente Osmeña. This Cebu City landmark was built in 1912 to mark the opening of Osmeña Waterworks, now known as the Buhisan Dam. This photo was taken in 1915, close to the time of the murders discussed in this article. These three, it must be said, had nothing to do with the killings. (Photo used with permission of the Cebuano Studies Center of the University of San Carlos)

“It was a sensational case where the people of Cebu attended the packed trial faithfully for two years,” Miller wrote in her book.

The judge later convicted all the suspects and sentenced them to 17 years in jail, save for Sergio Orias, one of Elias’s servants. They appealed their case to the Supreme Court and were exonerated on January 22, 1917 because the magistrates found that the testimonies of witnesses were tampered with. They were subsequently released.

As one of the few towns located at the southernmost tip of Cebu, Samboan is an unspoiled gem of natural wonders and ancient stone monuments….

1 Comment on Samboan is home to natural, heritage attractions

Good food at an affordable price is what Grand Majestic, one of three restaurants at the Grand Convention Center in Cebu City, aims to provide…