#TBT: Traffic much? Colon traffic and the ‘Best Trafficman of the Year’ 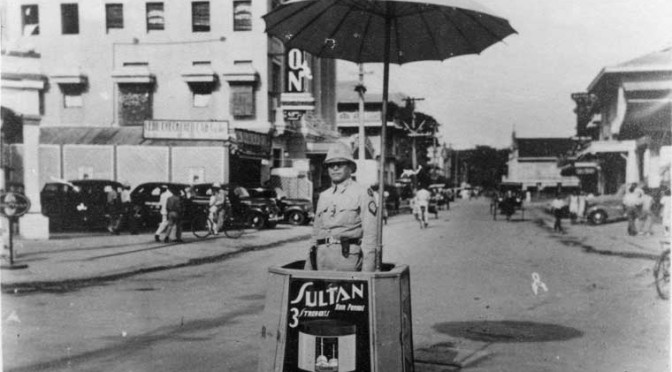 This photo taken in about 1930 shows trafficman Pio Alo manning traffic on Colon Street. According to the information that accompanied this photograph at the Cebuano Studies Center archives, Alo was named “Best Trafficman of the Year” in the year this photo was taken.

Photo by Jose Martinez. This image is part of the Cebuano Studies Center collection at the University of San Carlos and is used in this site with permission from the center.

Alo is shown inside a traffic box that was in use at that time. The box had an umbrella to shield trafficmen from rain or the heat of the sun.

At left is Vision Theater, where you can see a line of taxis from the Checkered Cab. Next to the theater, according to the photo info card, was the residence of the late Don Sergio Osmeña. It is now occupied by Eden Theater.

Across Vision theater was Cebu Lunch, a popular eatery at that time.

Here’s Colon Street today, in a photo taken by by USJ-R intern Nel Mozol just yesterday, January 15, 2015, at the general area of the photo above.

Buffets are a great dining experience in Cebu and one of my favorites is that of Quest Hotel’s Puso Bistro and Bar. Quest’s Puso Restaurant…