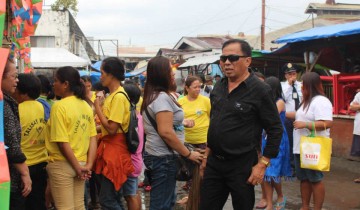 With elections just a year away, political posturing has started in Talisay with Mayor Johnny delos Reyes accusing the City Council of trying to sabotage his administration by cutting his P1-billion budget by almost half.

In Cebu City, delays in garbage collections have worsened after the closure of the Inayawan sanitary landfill. The problem has been exacerbated by the lack of garbage trucks, bad roads and the heavy traffic from Cebu City to Consolacion, said a top official.

Meanwhile, if you’re still reading this on a laptop of PC, we invite you to try viewing it on the phone. We made sure this site works well on the phone. Bookmark www.mycebu.ph on your phone’s browser so you can open it first thing in the morning to get a rundown of the day’s top Cebu news stories.

“As father of the City it is my duty to show the council that it has done the wrong thing so I will veto the budget.” — Talisay City Mayor Johnny de los Reyes, as quoted in Sun.Star Cebu

Villarente, however, said they cut appropriations that the mayor’s office could not properly explain. He asked the mayor to “stop misleading” Talisay residents.

“When we called several department heads to discuss further the lump sum, other maintenance and operating expenses and special activities, they couldn’t give us a sufficient explanation that’s why the council slashed the budget.” — Vice Mayor Romeo Villarante, as quoted in Sun.Star Cebu

Council members are ready to override the mayor’s veto. The council is dominated by the opposition Alayon Party of former mayor Eddie Gullas, with 7 members. However, 2 of de los Reyes’ allies, Councilors Danilo Caballero and Aldin Diaz, will support overriding the veto. That leaves, according to The Freeman, only 2 councilors to support Mayor de los Reyes.

The issue could drag on as Talisay City Legal Officer Alfredo Sipalay said that if the council overrides the mayor’s veto, de los Reyes can either raise the issue to the Cebu Provincial Board or the courts.

The problem on garbage collection in the south district of Cebu City has worsened with the closure of the Inayawan sanitary landfill.

When before barangay garbage trucks only had to bring their collection to Inayawan, they now have travel about 12 kilometers north to Consolacion to dump it in a private landfill.

Association of Barangay Councils president and Tisa barangay captain Phillip Zafra said barangays from the south district are struggling with garbage collection. The problem is exacerbated by the lack of garbage trucks, bad roads and heavy traffic to Consolacion.

“The landfill is just too far and the roads going there are in bad condition, so even the garbage trucks that are able to run eventually conk out. Also, the traffic going to Consolacion is very heavy. Our garbage trucks can barely make two trips in a day, that’s why we cannot avoid delays in the collection of the garbage.” — Association of Barangay Councils president P.

As solution, the barangays will ask the City Government to look for a private landfill closer to them, in Talisay City or Minglanilla.

Parking in Fuente to follow procedures in Mactan Airport

City traffic officials are changing the parking procedures at the Fuente Osmeña area to follow the procedure being implemented at the Mactan airport.

“Starting today, only diagonal parking will be allowed on a designated parking bay across the Rajah Park Hotel and nearby establishments. The outermost lane, the lane beside the sidewalk, will strictly be a no-parking lane to make way for vehicles that will drive by to drop off or pick up passengers.” Sun.Star Cebu explained the changed procedures in its report.

The change comes a week after they modified parking and stopping rules in the area to address congestion.

“The parking scheme in Fuente starting today will be exactly like what is being implemented at the Mactan airport… All the vehicles will have to park diagonally, with the nose (of the car) going in first.” — Cebu City Mayor Michael Rama

“We need to ensure a continuous traffic flow there because Gen. Maxilom and the Fuente Osmeña circle area is a vital road network that leads to hospitals. You cannot count the number of ambulances that pass that area every day.” — Cebu City Traffic Operations Management (Citom) Executive Director Victor Caindec

Low oil prices will not last; save more, expand investments

PRICES of oil products will not stay low and people should take advantage of its current level by saving more, accelerating loan payments or expanding investments.

“People should not spend too much of whatever savings they get out of the cheap fuel because this is temporary,” Gonzales said.

“But here’s one more thing the Pope can teach all of us: that a truth is more potent when well-timed. And that sometimes the best thing to do, when all one wants to do is grumble, is to be quiet.”

The Freeman editorial: The trash comes with the territory

Don’t just bitch about the trash…

“What we should be bitching about is the unruliness of the crowds in the streets in the after-Sinulog parties. Where are the policemen, barangay tanods and other peace-keepers when they are needed to control those who take over the streets and prevent vehicles from moving forward, blocking their way and terrorizing their occupants by banging on the sides or jumping on them and rocking them, spraying them with beer or worse, spray-painting them.”

Bobby Nalzaro asks: Did Bebot Abellanosa use the Sinulog for politics?

A tarpaulin with photos of Bebot covered the float with the markings: “Abellana National School contingent is sponsored and powered by ACT.” How come his photos were displayed in the float when ACT was the sponsor? The emcee, Sam Costanilla, also kept mentioning his name. Is that allowed now by the Sinulog Foundation? I am afraid that next year’s Sinulog will banner politicians’ names and photos considering that it’s an election year.

Don’t just depend on EU-GSP+, focus on quality of products to do well in the European market, exporters told

“The EU-GSP+ is just gravy on the steak. Ultimately, it is the quality that will determine your marketability. While we can take advantage of these preferential trading agreements. We should not put all our eggs in there.” Export Development Bureau Director Senen Perlada

More opportunities open for Filipinos to work, live in Canada

New immigration policies will allow more Filipinos to work in Canada, according to Cebu-based via consultancy PinoyCare Visa Center. Canada has expanded its skill categories to 2,000. The country has also offered an Express Entry option “designed to get people with the skills to succeed in Canada’s economy faster than ever.”

With Express Entry, applications by skilled workers to move to Canada is done within 6 months or less.

MyView: Did we party too hard during Sinulog? What should City Hall do in Sinulog 2016?

YOU’VE probably seen the photos all over Facebook: people passed out and wasted on Cebu City’s streets after a night of heavy Sinulog partying. A…

6 Comments on MyView: Did we party too hard during Sinulog? What should City Hall do in Sinulog 2016?

AFTER a rapturous welcome by millions of Filipinos, Pope Francis left the country yesterday “feeling the warmth” of the bastion of Christianity in Asia. While…