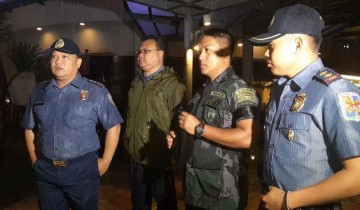 Drivers passing the South Road Properties should slow down to 40 kilometers per hour or else they will get arrested, Cebu City officials warned yesterday. Traffic enforcers have started distributing flyers to inform people about the new speed limit, in preparation for the time when they will start arresting violators.

The Cebu City Government has warned drivers that they will soon start arresting those who go beyond the new speed limit at the Cebu South Coastal Road (CSCR) in the South Road Properties (SRP). From the previous speed limit of 60 kilometers per hour (kph), Mayor Michael Rama has ordered it lowered to between 30 kph and 40 kph.

Rama issued the order as part of his demand for safety measures in the area to address a spate of vehicular accidents.

“Citom will exert all effort to let the public know. We only gave flyers to those we thought were driving too fast in the SRP. Maybe they weren’t aware of the new speed limit since maybe they haven’t read or heard about it in the news.” — Citom division chief Joy Tumulak as quoted in Sun.Star Cebu

The restriction is based on a 1973 ordinance – City Ordinance 801 or the Cebu City Traffic Code – which states that passenger cars and motorcycles are only allowed a maximum speed of 40 kph when passing national roads and local roads. Under the ordinance, violators will will be fined P500 to P1,000.

MOURNING THE FALLEN SOLDIERS. Top police officials in Cebu gather before the start of the Walk for Sympathy for PNP-SAF members killed in Sunday’s battle in Maguindanao. (Photo by Ryan Sorote of TV 5)

The desecration of bodies of members of the Special Action Force (SAF) killed in a battle in Mamasapano, Maguindanao last Sunday is unforgiveable, according to Senior Supt. Conrado Capa, deputy regional director for operations of PRO 7 and acting director of Cebu City Police Office (CCPO).

“We should not forgive them for that. Ang gumagawa lang niyan ay ISIS,” said Capa, who became emotional during yesterday’s press briefing and cried over what is described to be the bloodiest police operation in recent history, with 44 elite police commandos killed.

“I can forgive them because the police and military die in a battle. What I can’t forgive, is, you desecrated the dead. That’s unacceptable. There’s no need to mutilate the dead. You don’t have to cut the heads, take out the eyes and cut the arms. They’re already dead. Just give us the dignity of death.” — Senior Supt. Conrado Capa, who, as a young junior officer of the Philippine Constabulary, signed up for more training with the SAF

Duterte was in Cebu yesterday to promote federalism. He said in a press conference at the University of Cebu that before talks with Muslim rebels resume, authorities must be able to determine who were responsible for the killing of the policemen.

“Justice must be served to the victims. This (massacre) is not a joke for both Muslims and Christians that 44 policemen lost their lives.” — Davao City Mayor Rodrigo Duterte

People are asking: Where is President Aquino? #NasaanAngPangulo

Davao City Mayor Rodrigo Duterte said he is going around the country not because he wants to run for president in 2016 but to promote federalism.

Duterte said bulk of the country’s resources goes to Manila and only a little is allotted to Visayas and Mindanao. With federalism, he said, there will be equal distribution of the nation’s wealth

“I am not a candidate for President. I am only visiting several places in the country like Cebu because I am promoting the Federal System of Government, especially that the present government is highly-centralized.” — Mayor Rodrigo Duterte, when asked about his plans for 2016

When asked if he will run for president if some businessmen like Augusto Go will bankroll his candidacy, Sun.Star Cebu quoted Duterte as saying he will think about it.

“Manila has been lording it over for centuries now.” — Mayor Duterte, as quoted by Cebu Daily News.

Sun.Star Cebu: Afghan-American accused of forcible sex acts with minor, kidnapping, false imprisonment, and sexual battery in the US arrested in Barangay Sambag I, Cebu City