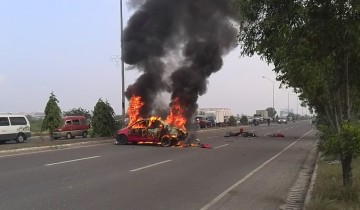 Cebu City Hall has lowered the speed limit at the South Road Properties to 40 kilometers per hour from the previous 60 kilometers per hour. A spate of accidents, including one where a car went up in smoke after hitting a motorcycle (video below), forced Cebu City Mayor Michael Rama to threaten the closure of the SRP to vehicle traffic unless safety measures are in place.

Among the measures ordered by Rama is the lowering of the speed limit to 40 kph.

Joy Tumulak, Cebu City Traffic Operations Management (CITOM) operation division chief, told MyCebu.ph in an interview via SMS that they have installed signs at the SRP with the caution “Slow Down 30 kph.”

Tumulak said a CITOM mobile patrol has been assigned to the area to conduct regular roving at a designated speed. If a vehicle overtakes and goes beyond 30 kph, they will sound the siren and warn the driver through a public address system to slow down.

Tumulak said they will focus on conducting an information drive to tell people about the new regulations at the SRP.

He said the City Government is planning to buy a radar gun for enforcement of the SRP speed limit.

“We would like to appeal to the motorists. What City Hall is doing is for your safety. Dili na lang unta ta magdinakpanay, be a responsible driver.” — CITOM operation division chief Joy Tumulak

After lowering the speed limit at the SRP to 40 kph, Mayor Michael Rama is now considering banning motorcycles from the area after a spate…