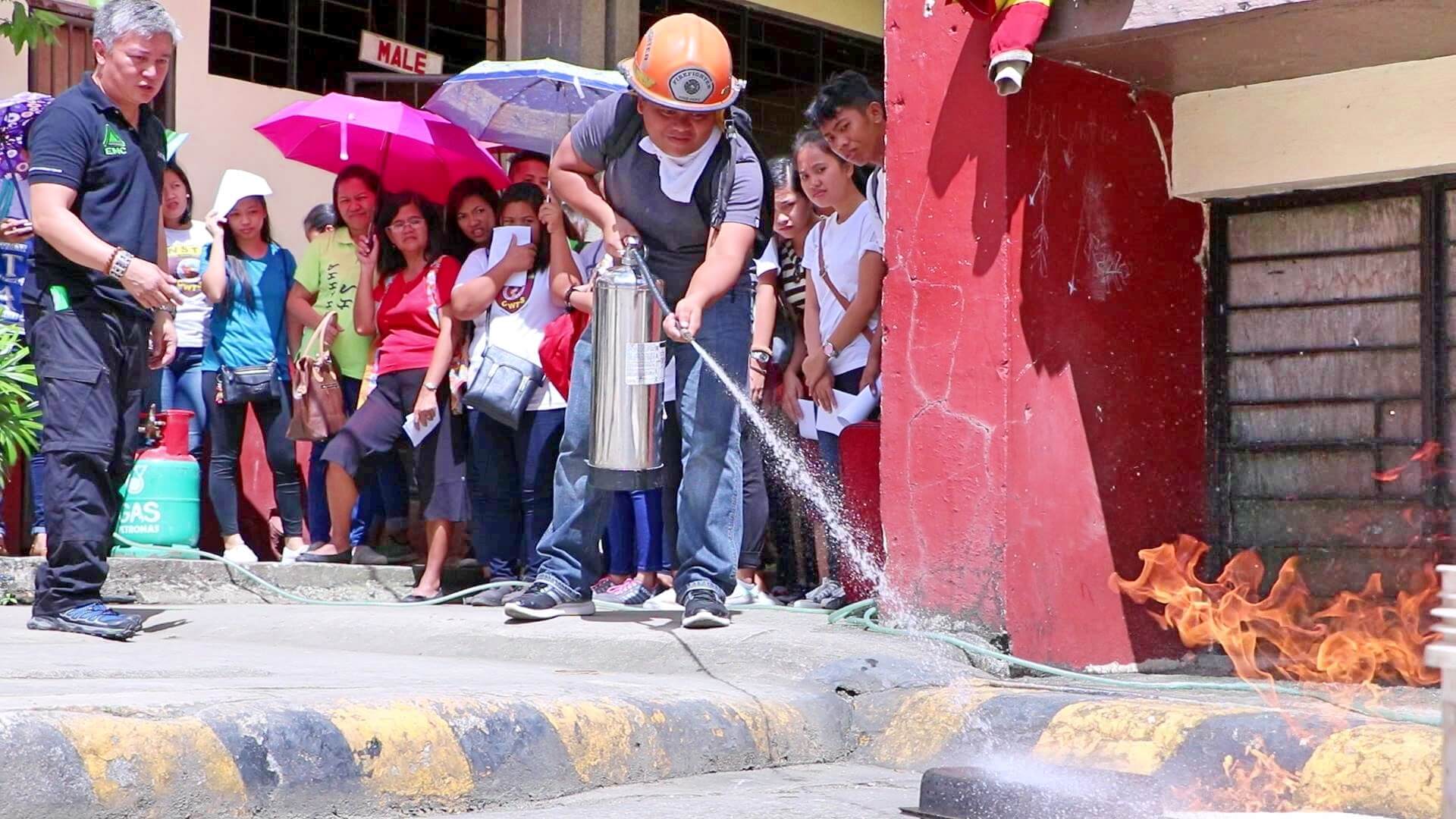 To serve more communities in the areas of disaster preparedness and environment, Smart Communications (Smart) expanded its existing programs, launched new ones, and developed solutions in 2017.

TROPANG READY. A student learns how to use a fire extinguisher during the TNT Tropang Ready “Training of Trainers” disaster preparedness and emergency management activity organized by Smart at Eastern Visayas State University in Tacloban City in November.

Smart also enhanced the capability of the National Disaster Risk Reduction and Management Council (NDRRMC) by turning over to the agency the Emergency Cell Broadcast System. ECBS issues quick location- and hazard-specific alerts using a channel separate from that used by calls and text messages, which may get congested in times of calamities. This makes ECBS an effective warning system during disasters.

Republic Act No. 10639 or The Free Mobile Disaster Alerts Act mandates all telecommunication services providers to send free mobile alerts in the event of natural and man-made disasters and calamities. Smart acquired the latest cell broadcast platform, investing P400 million, to effectively comply with this law.

The Philippines faced a number of natural and man-made hazards this year. Batangas, Leyte, and Surigao del Norte were affected by earthquakes, while several areas in the country experienced flooding and landslides due to typhoons. Marawi was also besieged with conflict that displaced most of its residents. In these trying times, when access to communication could get limited, PLDT and Smart offered communication services as aid, allowing residents to reconnect with their loved ones and get information on where to avail of basic necessities and state services.

PLDT and Smart public affairs head Ramon R. Isberto emphasized the importance of staying connected in times of disasters. “Communications is vital in any emergency situation,” he said. “As a telecommunications company, our primary job is to keep the network running so that we can provide continuous emergency communications services.”

A Libreng Charging Station was set up in Barangay Linao in Ormoc following the magnitude 6.5 earthquake that hit Leyte in July.

Through its ramped-up network expansion program, Smart ensures that customers will have uninterrupted wireless coverage even during emergencies, and that nearby cell sites have the capacity to compensate for the affected ones.

Meanwhile, the Batingaw disaster management app, a project by the NDRRMC, Tudlo developers group, and Smart, was replicated in the Horn of Africa. It was adopted in Kenya as an early warning tool during their national elections, and for disaster risk management, with the high probability of El Nino in the region.

Harnessing technology to protect the environment, Smart teamed up with technology partners to deploy solutions in forests and critical habitats. The company is working with Ericsson to implement the Connected Mangroves project in Bangkung Malapad, Sasmuan, Pampanga. This IoT (internet of things) solution will use Smart’s wireless connectivity to capture data relevant to mangroves’ survival such as water level, humidity, soil moisture and temperature, and other hazards in the environment.

CONNECTED MANGROVES. This mobile phone screen shows the interface of the Connected Mangroves dashboard, which may be accessed at ericsson.luimewah.net. The website shows information that has been recorded from the sensors attached to the mangroves.

Smart is also collaborating with startup Instigators Inc. for the Biosentinel environment monitoring system, which will be deployed in Mt. Makiling Forest Reserve. The system has three components: the web dashboard; the app, which can be used by forest patrollers; and the analytics data software.

The company is also steadfast in its commitment to protect the Marikina watershed by expanding livelihood assistance to the communities working to rehabilitate the protected area.

Smart will continue to provide communications support and work with the government and other partners in building better prepared and environmentally sustainable communities. (Press Release)

Reward yourself, loved ones with an investment

This year, UTrade gives you another option to reward yourself from working hard – a gift that will be cherished and felt not only during…