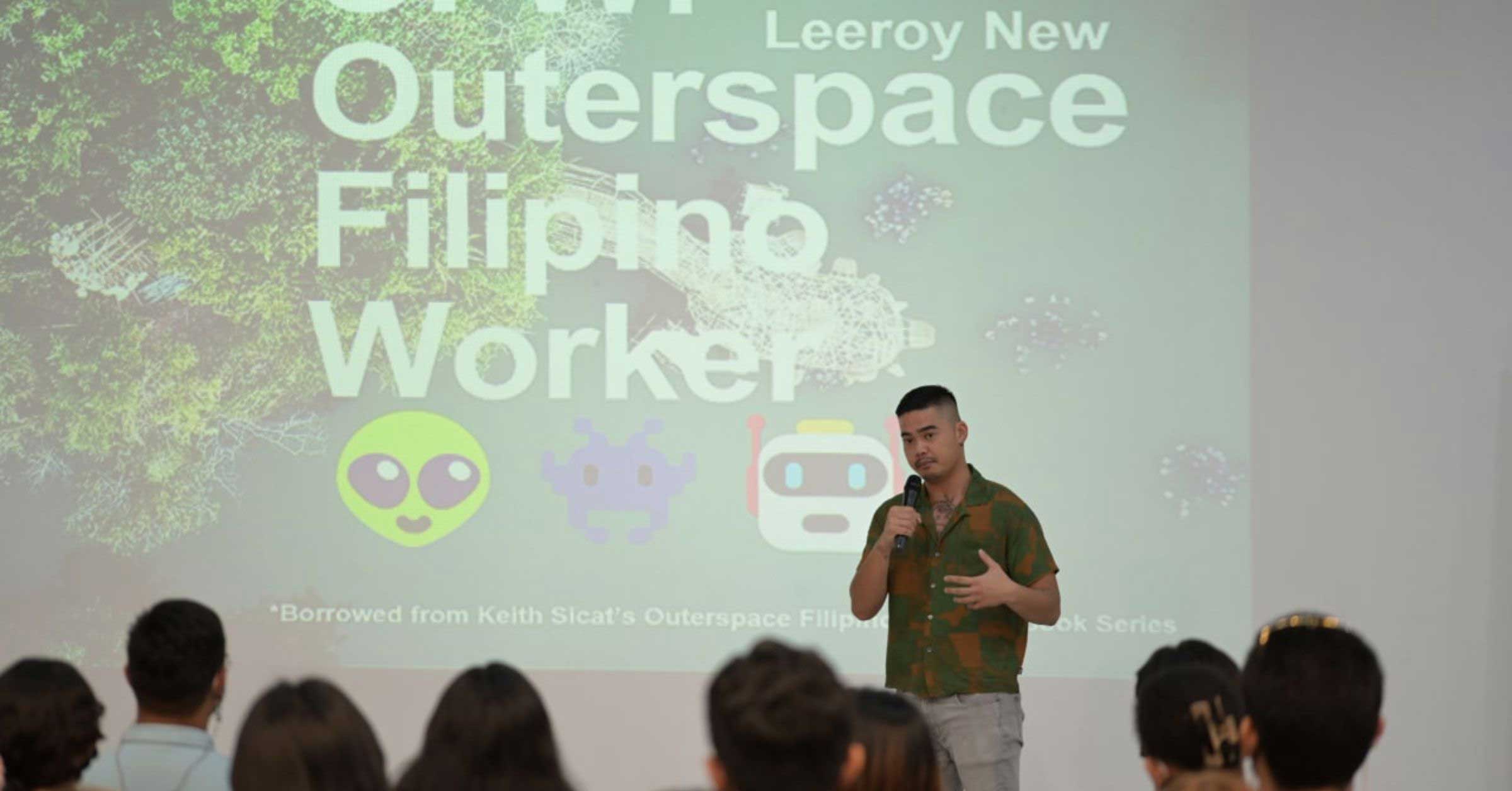 Visual artist Jan Leeroy New shared his journey in the creative industry and passion for large scale public installations with art students from various colleges and universities during the 55th NSAC’s onsite Art Interact in Cebu.

In one of the three Pilipinas Shell National Student Arts Competition (NSAC) Art Interact activities throughout 2022, which was held at the Kabilin Center in Cebu City on December 10, New taught students how to create wearable art installations from plastics.

The celebrated artist was the NSAC second place winner for Sculpture in 2004 and 2006.

The 55th Pilipinas Shell’s NSAC and its face-to-face Art Interact events in 2022 provided venues where master artists built the next generation of talents in Metro Manila, Bacolod, and Cebu.

Pilipinas Shell Vice President for Corporate Relations Serge Bernal, in a press statement, evoked this year’s NSAC theme of “Sulong Sining” to encourage participants to use the uniting power of art to charge forward by showing who they are, what they value, and what they envision through art.

He delivered a message during the 55th NSAC culminating event at the Ayala Museum, where he thanked young artists for showing that creativity and art are alive, well, and growing in the country.

From simple beginnings to becoming master artists, Pilipinas Shell Social Performance Adviser for Downstream PH Jonathan Juanillo said he hoped the students would learn a lot from New and that the company will be with them to support them as they move the Philippines forward through arts and culture.

Although he was trained in the studio arts, New dabbled in other creative expressions that included production design for tv and film and even for fashion shows. He said in an interview before the Cebu workshop that he took on the challenge of large scale public art to provide people with access to artistic and creative displays that they otherwise wouldn’t have been able to experience.

Some of his immersive installations include Kraken, Rising for Melbourne in 2022, Burning Man in 2022, Flotilla, Biennale of Sydney in 2022, Mebuyan’s Colony in Ateneo in 2021, and Mebuyan’s Vessel in 2020 in La Union.

As a student at the Philippine High School for the Arts, New said he learned to be resourceful and would go to recycling centers to get materials for his art. “My first paintings were of fishermen and farmers.” Later on, though, he learned that “art can be in a public place” and not just inside the traditional art galleries.

He advised the more daring Cebuano artists who might follow this path that “the public may have their own interpretation of their work. All you can do is make the most of how you do it, and make sure you understand what you’re doing.”

Haidee Emmie Palapar, The Kabilin Center Head, looked forward to more art events in Cebu. “We hope that this affair will be productive and enlightening to our young artists. We cannot wait for this to be a consistent and regular activity at The Kabilin Center,” she added.

The longest of its kind in the country, Pilipinas Shell’s annual NSAC has served as a platform to celebrate the accomplishments of young visual artists and open to them various opportunities in the art world. It has built a legacy of developing the local art scene by creating an opportunity for young talents to showcase their creativity regionally and nationally.

Three NSAC alumni artists took the lead during the Metro Manila Virtual Art Interact. The first was Edgar Doctor, recognized among the “2000 Outstanding Artists and Designers of the 20th Century” by the London-based International Biographical Centre. He was the Shell NSAC 1960 third place winner in the Conservative Art category and Shell NSAC 1964 first place winner for On the Spot Painting. Another was Jonathan Joven, who won second place in Shell NSAC 2012’s Watercolor category and has showcased his works in top galleries in the Philippines, Singapore, and Asia. Finally, Hyacinth Laoke, known for her work in Digital Fine Arts, won third place and second place winner in her category in the Shell NSAC 2011 and 2012, respectively.

The first face-to-face Art Interact kicked off at the Anima Art Space, Quezon City, on September 17, 2022. Highlighting it were the creative techniques that Shell NSAC alumni taught the young artists who later applied them in the workshops.

Doctor prepared the young audience to brave the difficult moments ahead. “Work. There’s no shortcut for success,” he told them. He was also the Shell NSAC 1964 first place winner in the On the Spot Painting category. Joven also reminded them of the importance of keeping the bigger picture in mind. He said, “Kailangan naroon yung vision mo, at yung willingness na mag-aspire sa gusto mong goal. (You need to have your vision, and the willingness to aspire to the goal you want.)”

The second Art Interact, held at the Orange Project in Bacolod City on October 26, 2022, showcased creative ways to transform existing materials into unique pieces of art. The Bacolod Aliens Workshop, also held by New, taught students how to create a wearable art installation by converting a variety of collected plastic bottle discards into biomorphic industrial alien growths that can be displayed and worn.

Experienced in diverse disciplines like film, theater, product design, and fashion, he explained his holistic approach as a way to connect with his audience on common ground because “people understand skills, technicalities, simpleness, craft—yun ang linguahe ng Pinoy (that’s the language of the Filipino).”

To learn more about Shell NSAC, please visit www.shell.com.ph/juanartnation. (With a Press Release)

NUSTAR celebrates season of giving with Children of Cebu Foundation

As The New Star of the Holidays, NUSTAR Resort and Casino is introducing an island of new celebrations. Throughout the Christmas season, the region’s first…