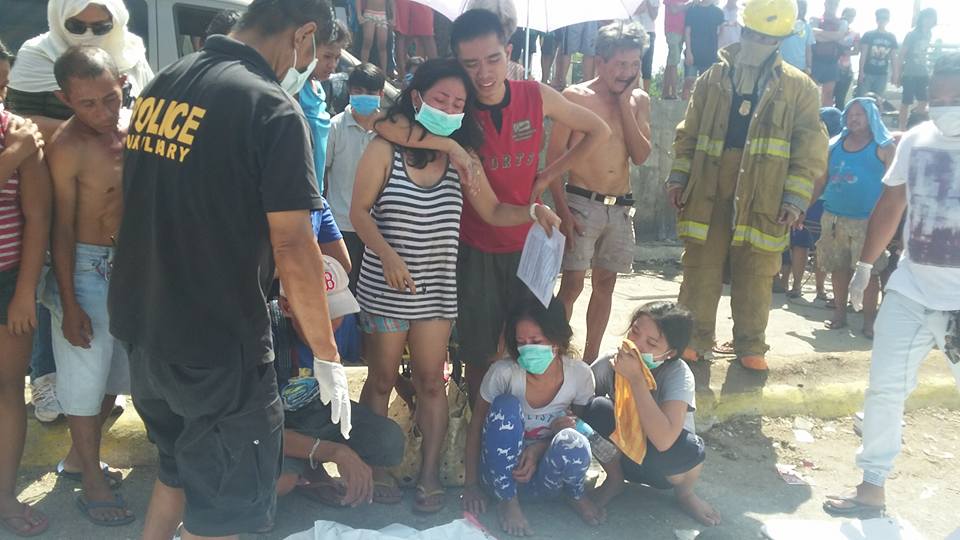 This is the roundup of stories that came out in local papers today, May 8, 2016.

DEADLY FIRE. Relatives cry as firemen bring out the bodies of the victims of the deadly fire. (Photo from Wang Wang Cebu’s FB page)

SEVEN people, including a mother and her three kids, died in a dawn fire in Pahina Central, a day before Mothers’ Day. Cindy Jane Galvan, 27, was killed in the fire along with four-year-old Rikcine, two-year-old star and three-week old Rain Cinrick when fire hit sitios Tumoy and Riverside Saturday dawn.  They are survived by their father Ricardo, who works in a pension house just a few meters away from their house.

What happened to my nephews and grand children is very painful because we were not able to help them. It was so sudden. Ricardo’s neighbor and relative Domingga dela Torre.

THOUSANDS of Cebuanos, estimated at 60,000, joined the final rally of PDP-Laban presidential bet Rodrigo Durterte at the South Road Properties last Saturday. However, Supt. George Ylanan of the Cebu City Police Office estimated the crowd to be only 4,500 to 5,000.

I believe that anything can happen, but I support my father as a citizen of this country, not just as his son. Sebastian Duterte.

A candidate for councilor in Mandaue City is accusing Rep. Gabriel Luis Quisumbing of having promised each barangay official P25,000 to deliver the votes in Monday’s election.  Atty. Erwin Heyrosa said in a press release that a source told him Quisumbing has prepared P5.4 million for the barangay officials. Quisumbing, who is running for mayor, denied the allegations.

There are 27 barangays in Mandaye City and about 216 barangay officials….and this alleged payoff will amount to P5.4 million according to a reliable source inside the camp of the congressman. Erwin Rommel Heyrosa in press statement.

» The Freeman: Comelec unfazed with glitches during final testing of VCMs

This is the roundup of stories that came out in local publicatiosn today, May 9, 2016: Cops, Comelec ready for polls. ELECTION and police officials…

Here are the top stories in Cebu today, May 7, 2016. Medellin mayor cries harassment after getting mauled in Bogo City motel; former Capitol security…