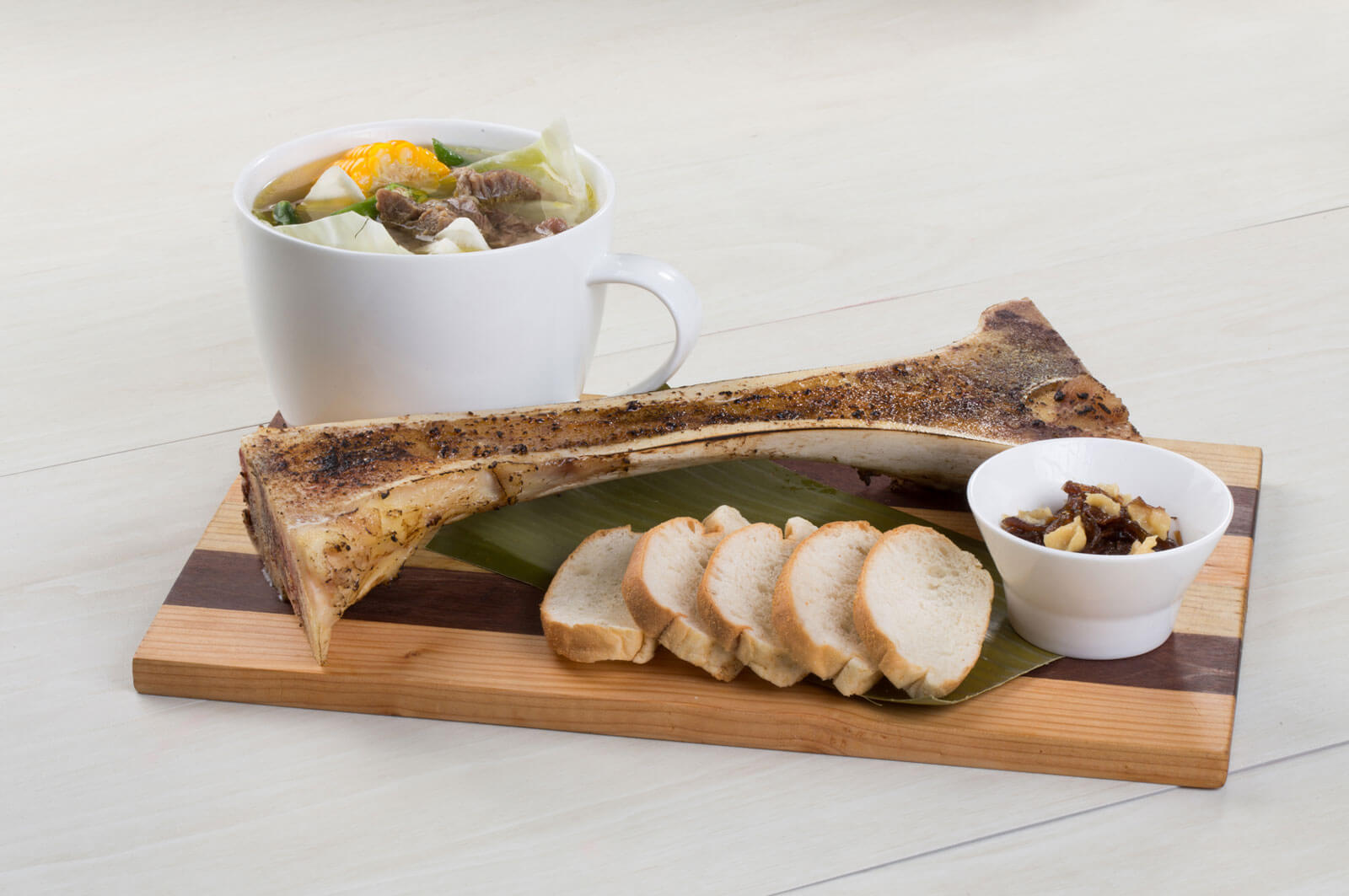 From the crunchy-delicious Crispig’s Ears appetizer to bloodless and meatless Dinuguan and a deconstructed Pochero, the newly-opened Salinas restaurant in Lahug is putting a new spin on traditional Filipino cuisine.

“We wanted to offer something interesting, something different,” said Golden Cowrie general manager Kenneth Kokseng in an interview during opening of Salinas on December 9, 2015. The opening was held along with the unveiling of the newly-renovated Golden Cowrie Lahug branch. Salinas is located right beside Golden Cowrie (check location).

“Cebuanos have a more discerning taste and they want something different,” said Kenneth.

The challenge in producing a new menu was to come up with dishes that were still Filipino but are more refined and refreshing, said Kristine de la Riva-Kokseng, who created all the dishes.

Crispig’s Ears: the clamor was loud: this one’s a favorite. (All photos on this article were provided by Bigseed PR & Events.)

Pako Salad with Calamari. Pako is a type of fern.

Pomelo Salad. For this, they had to bring in pomelo from Davao.

The food served in Salinas isn’t just tasty, each item is also an interesting take on traditional and Filipino comfort food.

Crispig’s Ears, for example, takes the traditional beer pulutan of deep-fried pig’s ears and seasons it with spices and sugar to serve as an appetizer. It was among the favorites of those who attended the media preview held for bloggers and journalists. Kristine said many people hesitate to try the pig’s ears and she has to convince them to order the appetizer. After they try it, however, many immediately profess it to be among their favorite dishes.

Other appetizers include such unique and scrumptious concoctions as Grilled Corn Croquettes, Smoked Bangus Croquettes, Manong’s Real Balls (skewered rolls of fish, squid, and shrimp), Salinas Kwek-Kwek (their take on the traditional street food made from quail’s eggs and orange batter), and Kinilaw Na Nukos.

Buwad and Aligue on Red Rice

Pinaupong Manok is served with camote.

Roast of the Month

The playful, almost quirky take on street food reflects the Salinas ethos of being familiar but different.

Salinas also collaborated with The Lazy Chef for one-of-a-kind meatless takes on traditional Filipino dishes like the Bloodless Dinuguan, and Veggie Sisig. Both dishes were delicious on their own and not just an approximation of the actual dishes. In the restaurant, vegetarians are “not just an afterthought.” Other meatless offerings include Kalabasa Soup, Eggplant Sandwich, Grilled Vegetable Miki, Fresh Banana Heart and Grilled Pineapple Salad, and Green Mango and Papaya Salad.

For rice, Salinas offers plain and garlic rice as well as the must-try Buwad and Aligue on Red Rice, which combines red rice, crab fat and dried fish flakes.

For the main dishes, Salinas seemed to have thrown the Filipino recipe book out the window with such unique offerings as Pocherong Katag, an installation piece of a meal that has your regular soup with the corn and meat picked of the beef bones and a baked bone marrow that you scoop, spread on toasts and relish with onion jam. The dish is tastefully presented on a board that’s so dainty to look at – a sure Instagram scene.

Salinas also has the Pina-ugang Balbacua, which was also good but I drew the line at this dish. I want soup with my Balbacua.

The Pinaupong Manok was another culinary hit. The fowl is made to sit on salt, cooked, and browned by being bathed in hot oil. It is then served with sweet potato or kamote, which enhances the flavor of the chicken, someone explained to our table.

The Pinaupong Manok is as delicious as chicken can be and seemed to be the star of the culinary lineup. Kristine said that when she researched the new menu in November last year, she found such forgotten Cebuano recipes as the perdis chicken soup. The flavors she then incorporated into her culinary creations. She said some of her concoctions did not make it to the final lineup because they did not go well with such items as her version of the Pinaupong Manok.

Other main dishes that Salinas offers include Kanding Tapa (with a cheeky exhortation to the menu reader: you goat-a try this!), Tokwa Over Baboy, Sinugba Sa Salinas, and Cocido (slow-cooked beef, pork, chorizo, vegetables).

Chilled Taho. One of many you should try.

Vegetarian Sisig. As a meat lover, the “vegetarian” prefix is a veritable warning sign. But this one was actually quite good. Beer pa day!

For drinks, it serves the cucumber agua fresca along with the usual lineup of refreshments. For desserts, Salinas serves Chilled Taho in plain and choco flavor. Kenneth said they also serve good coffee.

Prices of the food items are comparable with regular restaurants in Cebu, the Pocherong Katag is P495, the Pinaupong Manok P375, and the Crispig’s Ears, which has to be included in each order (trust us), is P105.

With its food lineup, Salinas succeeded when it set out to create Filipino food with a different, refreshing, and unique twist.

(Disclosure: We tried the new menu during a media preview event, when dishes are served to bloggers and journalists for free. All the photos on this page were provided by Bigseed PR, which handled the media event for the restaurant. We took a lot of photos, none as pretty as these images.)

For the 2nd straight year, the country’s mobile leader Smart Communications was named Best Mobile Operator in the prestigious World Communication Awards, an annual recognition program for innovation and outstanding performance in the global telecommunications industry.