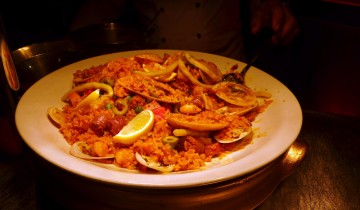 The Cafe Marco buffet at five-star hotel Marco Polo Plaza Cebu will feature a section devoted to tapas and carry Spanish recipes on top of its usual international spread of dishes until April 30.

Najar led Tuesday night’s opening of Sabores de España or Flavors of Spain, another Marco Polo culinary journey, at the hotel ground floor. Guests were treated to a taste of Spanish food and drinks.

CUTTING OF THE JAMON. Marking the opening of Sabores de España was the cutting of the jamon serrano by (from left) Maripaz Perdices, Gema Luisa Pido, Amparito Lhuillier, Jaime Picornel and GM Julie Najar.

Following the tradition of past Sabores de España events, the highlight of the night was the cutting of the jamon serrano, dry-cured Spanish ham served in thin slices.

With the Sabores de España culinary event, which started on April 21, traditional main Spanish and fusion dishes are also made available in rotation at the same regular buffet nett prices of P1,099 for lunch and P1,395 for dinner.

Ms. Gema Pido, who has been Marco Polo’s food consultant in the nine years that it has celebrated Spanish cuisine and its influence on Cebu dishes through the Sabores de España, said Spanish food is characterized by its use of wine in cooking.

“In Spanish food, there is no such thing as stir fry. Pure Spanish dishes have a lot of wine, mostly simmered for hours, and cooked in olive oil,” she said.

If you are a lover of wine and would avail yourself of the wine buffet for P450 nett per person with lunch or dinner, you can have your fill of white and red wine plus four choices of the popular Spanish beverage sangria, said Mariot.

Spanish coffee being prepared during the event. The process involved flaming sugar and rum.

Sabores de Espana, Viva Madrid! is one of Madrid Fusion Manila events under Flavors of the Philippines.

Traditionally held in the Spanish capital, Madrid Fusion is one of the biggest culinary events in the world.

Madrid Fusion, described as the event where the world comes to see the future of food, is being held in Manila for the very first time to celebrate over 300 years of shared history between Spain and the Philippines.

TAPAS. These small, savory dishes will be included in Cafe Marco’s regular buffet.