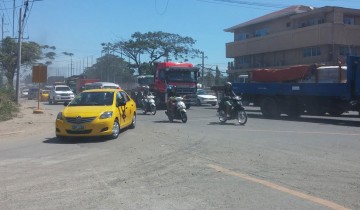 Heavier traffic is expected along the North Reclamation Area starting today, as some public vehicles on the S. Osmeña Blvd. route will be diverted as concreting work continues.

A former law student claims that Vice Mayor Jonah John Ungab of Ronda town is father of her child. She filed a sexual harassment case against the politician. Pearl, the vice mayor’s wife, is facing charges for attacking lawyer Jiecel Tiu with a baseball bat last week over allegations of infidelity.

This stretch of road will be closed to vehicles coming from Mandaue City. Motorists coming from the Mandaue City side of the North Reclamation Area will have to turn right to the access road going to the Aboitiz football field.

The Department of Public Works and Highways (DPWH) 7 will start implementing the next phase of its road-widening project on S. Osmeña Blvd.

This is expected to cause heavier traffic along the North Reclamation Area (NRA), prompting the Cebu City Traffic Operations Management (Citom) to advice the public to leave their houses earlier than usual to avoid getting stuck in traffic.

Here are some route changes:

Private vehicles bound for Mandaue City may pass through S. Osmeña Blvd. since the northbound lane is open to vehicular traffic. Those coming from Lapu-Lapu City may take the ferry.

Ronda Vice Mayor Jonah John Ungab’s former law school student filed a sexual harassment case against him last December. She posted a “Dear John” message on her Facebook account saying she would pursue her complaint which is about to be resolved by the Cebu City Prosecutor’s Office.

Prosecutor Ma. Theresa Casiño confirmed that the case is now due for resolution.

In the earlier investigation, Ungab denied the 27-year-old woman’s allegations that she was forced to have sex with him when he, as her law professor in Southwestern University in 2013, refused to release her grades.

In response to this development that happened after his wife, Pearl Ungab, attacked lawyer Jiecel Tiu with a baseball bat last week over allegations of infidelity, the vice mayor wants to maintain his silence.

Meanwhile, Tiu wants the court to suspend proceedings in the slight physical injuries against Pearl Ungab, while her bid to pursue a more serious case against the vice mayor’s wife is being reviewed.

The Land Transportation Franchising and Regulatory Board (LTFRB) ordered the drop of the flagdown rate for taxis nationwide from P40 to P30 starting Monday. Commuters…