The names of places come out in a staccato, wheezing whisper barely heard through the disco music booming from large speakers at the Cebu City Sports Center (CCSC) track oval.

“Marawi-Iligan, Cagay-an, Davao, Cagay-an, Manila, Cebu…,” Ireneo “Rening” Ylaya recites like a mantra—in a strained asthmatic’s voice—the places where he ran marathons. He says the names in the order that he ran them, going back to “Marawi-Iligan” when he skips a place and slapping his forehead while apologizing for forgetting. “Tiguwang na lagi (I’m getting old),” he said with a sheepish smile.

Cagayan de Oro? I asked Rening on what was probably the 6th lap of our interview while jogging around the CCSC track oval, where he is a fixture.

“Cagay-an de Oro. Didn’t I tell you? It’s the best marathon route I’ve run and I did it in 4:26 (four hours and 26 minutes), my fastest marathon time,” Ylaya said in Bisaya, barely breaking a sweat while I slowed down to catch my breath.

A stocky jogger then passed us, catching Ylaya’s attention. “A couple of years back,” he told me in Bisaya, pointing at the jogger with his chin, “I wouldn’t have let that pass. I would have run him down. Not the top runners, I couldn’t keep up with them, but the regular joggers. I would have never allowed him to overtake.”

That’s how most people encounter Ylaya—being told to use the outer lane as he leads a group of runners around the CCSC oval. That’s how I met him and the idea of being told to give way by someone who looked more than twice my age and half my size rankled.

“Believe it or not,” Meyrick Jacalan of the Cebu Executive Runners Club (CERC) later told me when I recounted the encounter, “I had a hard time keeping pace with Rening in the oval.” I snickered, half-suspecting Jacalan, a model of physical fitness, of teasing me.

I only realized that when, boosted by the ecstasy of finding myself inexplicably ahead of broadcaster and regular runner Haide Acuña during the Run for Sight edition in July, I plunged into the agony of finding Ylaya 20 or 30 meters ahead. Acuña would later zoom past me in the last few kilometers to win in her division, but that was expected. What I didn’t expect was to see Ylaya 30 meters ahead, his distinctive stride mocking me.

Guards of a North Reclamation Area company watched us. One pointed animatedly at Ylaya before all three turned to me. I didn’t need a lip reader to decipher what they were talking about.

I ran faster, the insult egging me on, to cut the gap. But Ylaya wouldn’t budge. When I began to close in, he’d increase the gap with that annoyingly consistent stride of his that’s one part skating with invisible rollers and another part Happy Feet. Every time I’d get closer he’d break away.

It was at that point on the road at the back of Cebu Doctors’ University that I realized, with my heart straining to pump blood and my lungs barely able to provide my body with needed air, that it would kill me, a 33-year-old man, to try to overtake Ylaya, who will turn 74 in March.

But a weak bladder would do him in.

Minutes after I gave up trying to overtake him, I saw Ylaya slow down and go to the side of the road to urinate. “Hay salamat, ginoo ko, (Thank God! [note: this English translation doesn’t quite capture the desperation in the phrase ]),” the moan escaped my parched lips as I ran past him. Despair brings out piety.

I swear I could hear Vangelis’ “Chariots of Fire” playing as adrenalin pushed me to increase the distance. Ylaya did not give up and still tried to overtake me but I was on my way to win our encounter. Score one for the fat kid. Chariots of Fire was already playing.

He chuckled when I recounted the run during our interview. “I used to be very fast,” he said, “I was faster than Yong Larrazabal when he was still starting.”

Potenciano “Yong” Larrazabal III, one of those responsible for the sharp growth of running in Cebu, gave a sheepish laugh in confirming the fact. He said it was during the Queen City Run when he immediately entered the 10-kilometer event on his first try and finished in more than an hour.

“I observed him when he runs and he isn’t that fast, but he is consistent,” Larrazabal said.

Larrazabal said Ylaya’s ability to run at his level at his age is astounding. It inspires younger people to take up the sport and improve their times, people at the CCSC told me.

“If an old man like me can do it, how much more young people like you?” Ylaya said.

Jacalan agrees that Ylaya inspires younger people to run, saying he is one of them.

“I’ve seen Rening join plenty of races and many of those he overtakes can’t believe that they’ve been outrun by a ‘grandpa.’ I also see some who are embarrassed. After Rening overtakes them, they’re stunned and try to catch up. But Rening is a seasoned runner and paces himself. In the end, he beats many of those half his age… myself included,” Pages said.

Ylaya said his fastest 10K, set when he was in his mid 60s, was 47 minutes. That is confirmed by Raffy Uytiepo, running columnist for The Freeman and one of the pillars of the sport in the country. In contrast, Pages said his fastest 10K was 51 minutes.

Larrazabal, who is planning to run 33 marathons in his lifetime, said he plans to run until he is Rening’s age or even older. You can’t doubt the doctor’s determination—not someone who runs 20 kilometers on a Sunday and then join a 10-kilometer run and record a decent finish.

That determination is reflected on Ylaya. He plans to run the Cebu City Marathon in January. Not the 10K or 21K races that will be held together with it but the actual marathon—the entire 42 kilometers around Metro Cebu. It’s running to Carcar from Cebu City.

“But can you still do it?” I asked Ylaya while slowing down as I strained to hear him answer.

“Sa akong estimate kaya pa kay murag wala man lang nako ang 10k. Basta maayo lang akong lawas, mudagan gyud ko (I think I can still do it because 10K is nothing to me. As long as I feel good, I will run),” Ylaya said. He said he now averages 50 laps at the CCSC oval. I had to stop mid-stride to ask him, “Singkwenta (fifty)?” Yes, fifty.

He reached into his running short’s waistband and took out an inhaler. He never goes out without one, he told me. He once collapsed at the CCSC during an asthma attack. He held out his hand to count with his fingers the days of his confinement. Two days after he left the hospital, he ran a 5K race, a week later he ran 10K.

He then pressed the inhaler to show me how it works in dealing with an asthma attack.

That is what worries Larrazabal, who helps Ylaya with his medications. He said Ylaya can run the marathon if he wants to but he should take a full medical checkup to make sure his body can take the toll.

Uytiepo thinks Ylaya should no longer attempt the marathon. “He has nothing to prove. I think he should slow down. Not stop, but slow down and just run for his health.”

He said Ylaya has a prostate ailment and should “take it easy.”

Rening, however, would have none of it, “ingon sila na-prostate ko. Naay mga doctor nga niingon silay mu-opera nako libre pero di ko, mamatay pa lang ko tiguwang na gud ko (doctors offered to treat me for free but I refused. I might die from the treatment).”

Uytiepo, who also directs races, said he was so concerned with Ylaya joining runs that at one point he stopped signing him up for free. “But he’s stubborn. Grabe iya pride,” Uytiepo said, “he told me he’d run anyway, with or without the race number. So I let him run.”

“Taas man ko ug pride, mao nang nilakaw ko diretso (I’m a proud man, that’s why I left her),” Ylaya said when our talk drifted to his domestic life. He became a widower in the 1990s and married again after a few years. He left his second wife but not before she organized what was to be Ylaya’s first ever competitive run—a 5K contest for senior citizens for their chapel’s organization in Toledo City.

He was 60 years old when he won that race, much to the surprise of his wife who thought he took a shortcut. After that, he said, he’d join races whenever he could, sometimes sleeping at the venue to make sure he’d be there when the starting gun is fired.

He went on to talk about how his pride led him to blow off thousands of pesos in the casino and shutter his small lending business “naglagot man ko kay daghan ko ug collectibles (I got angry because many debtors didn’t pay).”

We breezed through his life in the short span that it took to complete less than a dozen rounds in the oval—how he spent more than 30 years playing duckpin bowling all over the country, how he tries not to burden his son who drives a taxi, how brothers Rovie and Romeo Aguilon, Jr. and people like businessman Jonathan Guardo and Cebu City Mayor Tomas Osmeña give him money for his daily needs and races, how he was a Cebu City Charter Day awardee for senior citizens, how he also joined seven triathlons and nearly drowned in the last one.

I once asked him about a certain detail and he quickly offered to grab his bag, where, along with a change of clothes and his wallet, he keeps laminated clippings of certificates and news stories about him.

“Run at your pace, I’ll follow,” he told me in Bisaya as we concluded the interview. I had enough in me for a quarter of the oval, no more. I feigned a limp and excused myself.

He waved me off and went on in that annoyingly consistent stride of his. 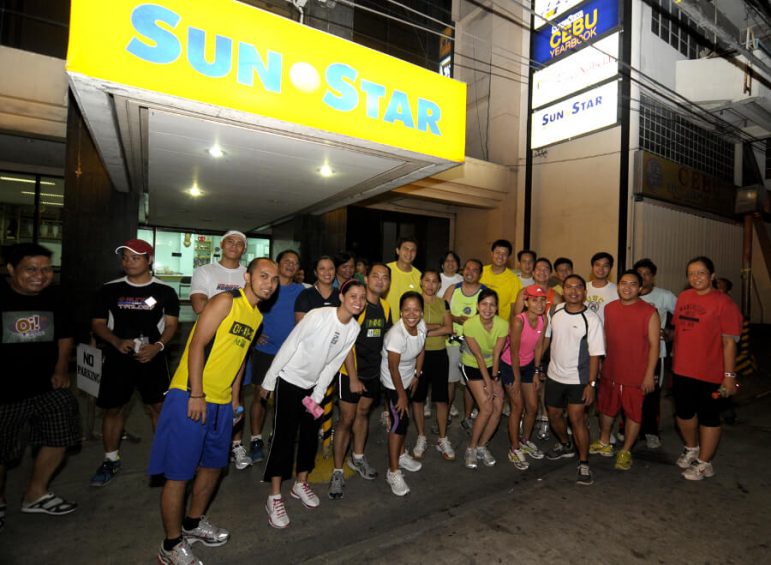