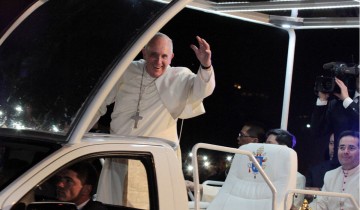 Pope Francis arrived to a massive Filipino welcome yesterday. People lined up the streets to catch a glimpse of him as he rode on his popemobile from the Villamor Air Base in Pasay City to the Apostolic Nunciature on Quirino Ave.

Pope Francis arrives in the Philippines

Pope Francis arrived in the largest Roman Catholic country in Asia and third largest in the world for a five-day apostolic visit yesterday afternoon. Estimates of the crowd that welcomed him varied from 1 million to 3 million, according to the Philippine Daily Inquirer. Church bells tolled throughout the country to welcome the widely popular leader of the Catholic Church.

Seconds after Pope Francis appeared at the top of the plane’s steps, a gust of wind blew away his papal skullcap. He smiled and descended the steps, without his hat.

ROCK STAR POPE. The widely popular Pope Francis smiles at the huge crowd that lined up to welcome him. (Philippine News Agency photo)

The pope was welcomed by President Benigno Aquino III, Vice President Jejomar Binay and top Cabinet officials. He was then brought on his popemobile to the Apostolic Nunciature on Quirino Ave., passing streets lined with people.

“The visit comes at that point when people would really be helped by a moral and spiritual boost coming from someone who really cares.” — Manila Archbishop Luis Antonio Cardinal Tagle

The weather bureau said Tropical Storm Amang would either make landfall in Legazpi City or in Eastern Visayas. Al Quiblat of Pag-asa Mactan said that if Amang makes landfall in Legaspi City, Tacloban and Cebu will be hardly affected.

The Central Command of Armed Forces of the Philippines (AFP), meanwhile, has made preparations for the possibility Pope Francis would be diverted to Cebu by the storm.

“We have a contingency plan.” — Lt. Gen. Nicanor Vivar, commander of Centcom.

The P50 coin for Pope Francis is made of nickel brass and will be sold for P100. The P500 coin is made of Nordic gold with gold plating. The coins can be ordered through the BSP website. Those who want to reserve coins can download forms from the site and email these to the BSP. Reservation will be accepted only until the end of June 2015.

“Both P50 and P500 coins are legal tender and will be sold for P100 and P1,000, respectively, to cover production, packaging and other costs. The coins are minted under a licensing agreement with the Vatican.” — Bangko Sentral ng Pilipinas.

Buses and other vehicles can now take their normal route going south with the opening of the temporary steel bridge in Dumlog, Sibonga at 3 p.m. today. The bridge has two lanes and a capacity of 20 tons.

The approach of the Dumlog Bridge, which connects Argao and Sibonga, collapsed after flash floods caused by tropical storm Seniang.

“This year is a functional, operational, confrontation, conflicting, implementing, creating and integrating of projects and programs for our administration.” — Mayor Michael Rama as quoted by The Freeman.

We published a food feature on the native dishes served in Marco Polo’s Sugbusog 2015. Do check it out: From humba to kan-on mais and saang, Cafe Marco buffet features Cebuano fiesta fare in Sugbusog 2015

Get a chance to win one of five Smart LTE pocket Wi-Fi devices by downloading the Sinulog Guide app to your Android, iOS, and Windows…