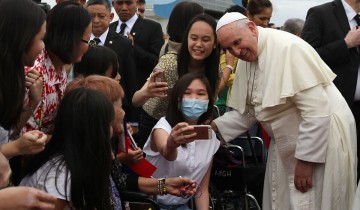 Pope Francis called for the protection of children and of the family in a mass at the Luneta that was attended by what the Vatican described as the biggest papal gathering in history.

“In these days, throughout my visit, I have listened to you sing the song: “We are all God’s children.” That is what the Santo Niño tells us. He reminds us of our deepest identity. All of us are God’s children, members of God’s family. Today Saint Paul has told us that in Christ we have become God’s adopted children, brothers and sisters in Christ. This is who we are. This is our identity. We saw a beautiful expression of this when Filipinos rallied around our brothers and sisters affected by the typhoon,” the Pope said.

PAPAL SELFIE. Pope Francis lets a woman later reported by a TV station as having kidney disease take a selfie with him. (Malacañang photo)

Here are some of the things Pope Francis said during his mass in Luneta yesterday and an earlier event with the youth in the University of Santo Tomas.

Filipinos are called to be outstanding missionaries of the faith in Asia.

The great question of why so many children suffer, she did this in tears. The response that we can make today is: let us really learn how to weep.

Today, with so many means of communication we are overloaded with information. Is that bad? No. It is good and can help. But there is a real danger of living in a way that we accumulate information. We have so much information but maybe we don’t know what to do with that information.

To be wise use three languages: think well, feel well and do well. And to be wise allow yourselves to be surprised by the love of God. That will guarantee a good life.

DEVOTION. The Pilgrim Center at the Basilica del Santo Niño is the center of the devotion to the Holy Child. (Photo by Ted Espinueva)

Kulturang Placereño and the Tribu Buyoganon from Abuyog, Leyte topped this year’s Sinulog grand showdown. Although much of the country’s focus was on Pope Francis in Manila, the Sinulog still drew a sizeable crowd estimated by police at 2.5 million, albeit lower than last year’s 3.2 million.

Cebu City Mayor Michael Rama has ordered no classes today in both public elementary and high schools in Cebu City. He also encouraged private schools not to hold classes.

Cebu Governor Hilario Davide III also suspended classes in all levels, including tertiary, today. For private schools, it will be at the discretion of each school. Mandaue City Mayor Jonas Cortes has also declared no classes in all public school levels today.

Here are the winners of the Sinulog Grand Showdown:

All 6 companies will cut gasoline prices by P1.25 per liter and its various diesel brands by P1.45 per liter. Kerosen products will also be P1.25 per liter cheaper.
The companies said the price cuts mirrors the plunge in oil prices in the international market. (From a PNA report)

MyStory: A confused mind is like murky water, here’s how to find inner peace

If you wander around the city, you might notice some people in stretchy pants slinging a yoga mat on their backs. They are called yogis…