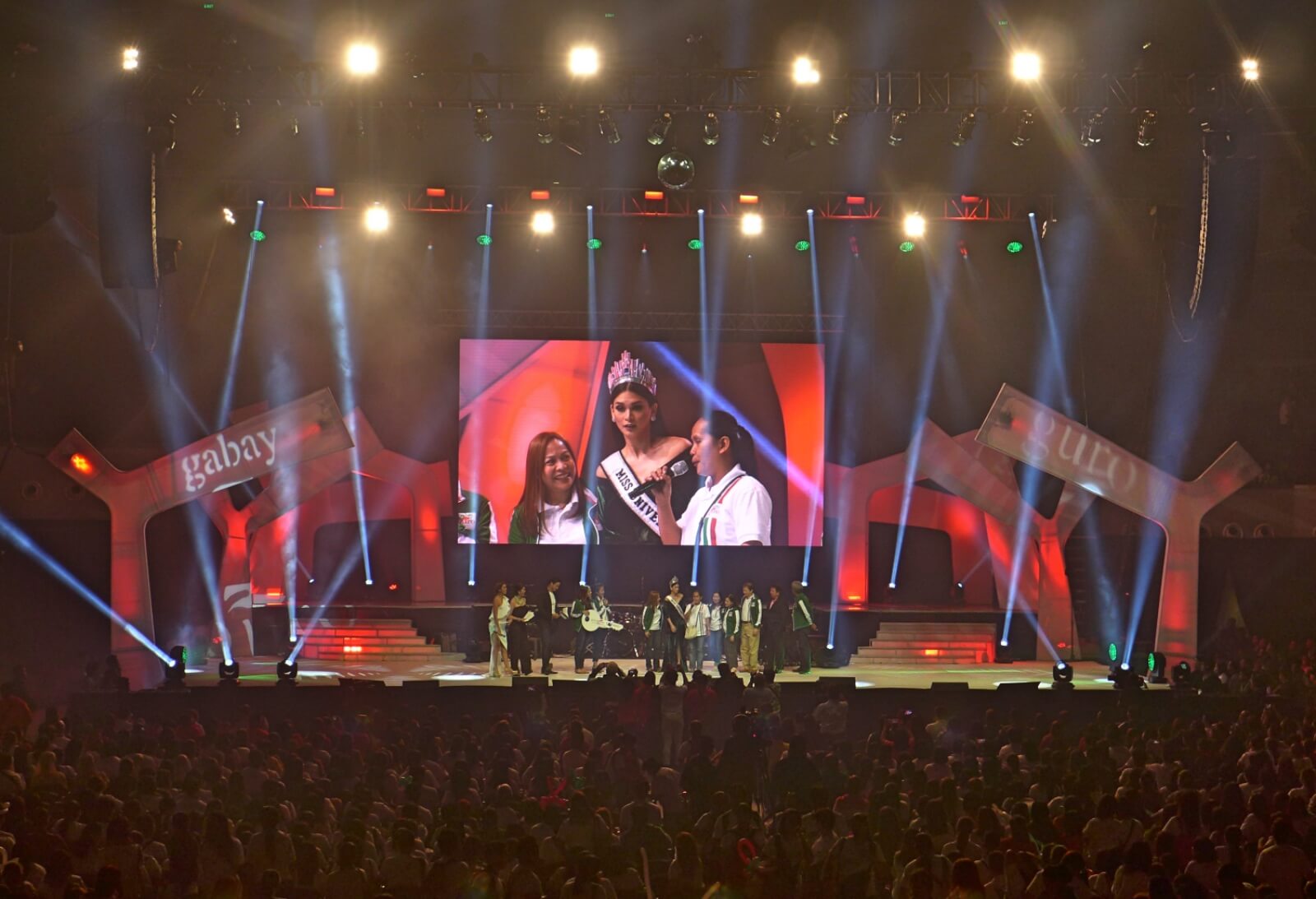 ON the eve of #TeacherFest2016, teacher Chita Mejia was told by her husband, “don’t go home without the key to that house they are giving away.” On Sunday, Mejia won the grand prize of a house and lot.

The Mejias do not own a house. Mejia, who teaches at the Carlos L. Albert High School in Quezon City, was emotional when she told her story and thanked the PLDT Gabay Guro for organizing the event, which was held to honor the country’s educators.

TeacherFest is an annual event hosted by PLDT Gabay Guro and its partners to honor teachers through performances by the country’s top artists and a raffle of huge prizes — laptops and pocket Wi Fi; a round trip package to Hong Kong that includes air fare, accommodation and pocket money; cash prizes of P10,000; P20,000; P50,000, P100,000; a Foton van, and the house and lot.

GRAND PRIZE. Teacher Chita Mejia thanks organizers upon being handed a ceremonial key after winning a house and lot during the #TeacherFest2016 in MOA Arena. With her are PLDT Gabay Guro chairperson Chaye Cabal-Revilla and Miss Universe Pia Wurtzbach. (MyCebu photo: Max Limpag)

The extravaganza for teachers, said PLDT Gabay Guro chairperson Chaye Cabal-Revilla, is meant to show that they are important and loved.

The annual event started with just a gathering of 200 teachers at the activity center of the Mall of Asia. It grew to 800 teachers and to several thousand. On Sunday, 20,000 were gathered at the MOA Arena.

PLDT Gabay Guro was organized 9 years ago by employees of the company who wanted to help out their community. Cabal-Revilla is the chief financial officer of Smart.

“And the best way to do that was to help out the teachers. There is a multiplier effect. You help one teacher you help everybody, their family and their kids and the kids that they teach, year in year out,” Cabal-Revilla said in an interview after the event.

BIGGEST STARS. Regine Velasquez performs with some of the country’s top stars during the event. #TeacherFest2016 gathered stars from ABS-CBN, GMA 7 and TV 5.

“Education is a great equalizer,” she said, that has a wide impact “if you wanted to do something for national development and to help the country.”

Sunday’s event was able to gather some of the country’s biggest artists from ABS-CBN, GMA 7, and TV 5. Among those who performed or were present were Regine Velasquez, Ogie Alcasid, Leah Salong, Gary Valenciano, Gab Velenciano, Jaya, Martin Nievera, Miss Universe Pia Wurtzbach, Pops Fernandez, Maine Mendoza and other Eat Bulaga stars, among many others.

Cabal-Revilla cited Wurtzbach as having arranged her schedule to be present at the gathering. She said this shows the importance of their advocacy, “You will never be able to bring them together unless you have an advocacy as good as this.”

Cabal-Revilla also said that the gathering was run by a team made up purely of Gabay Guro volunteers.

During the event, PLDT Gabay Guro paid tribute to teachers Annie Lee Masongsong and Cristelle. Masongsong was featured in a GMA 7 documentary that showed the challenges of her assignment to teach a Mangyan community: she has to walk for 4 hours, cross 16 rivers, and scale 2 mountains. They were given laptops and a pocket WiFi.

Apart from the #TeacherFest, Gabay Guro’s programs are focused on training, scholarship and providing equipment to schools.

Through PLDT Gabay Guro’s help, 600 of their scholars have graduated from education-related courses and are now teaching.

Cabal-Revilla said they thought of offering scholarships because for a time, “nobody wanted to become teachers” because of the low pay.

“Apart from scholarships, we give them livelihood programs to supplement their income,” Cabal-Revilla said.

PLDT Gabay Guro worked with 51Talk to arrange for the teachers to give Enbglish language training for Chinese and Koreans online as a way for them to earn extra. Connectivity is then provided by PLDT and Smart.

PLDT Gabay Guro has also trained close to 40,000 teachers nationwide in various modules. They also provide a Gabay Guro Tribute Card that they can use to pay for movies, LRT and bus trips and offers discounts with partner retailers.

This year, Cabal-Revilla said, they also started a grassroots campaign against drugs that is being led by teachers.

“We want them to feel loved that when you’re a teacher you are a hero. That’s one of the things that push us year in and year out,” Cabal-Revilla said about the drive for volunteerism in their group.

This is the roundup of stories that came out in local publications today, September 27, 2016 ‘He only went down to pick up his shirt’…

This is the roundup of stories that came out in local publications today, September 26, 2016. Sabalones name 2 former Cebu City police officers, ex…