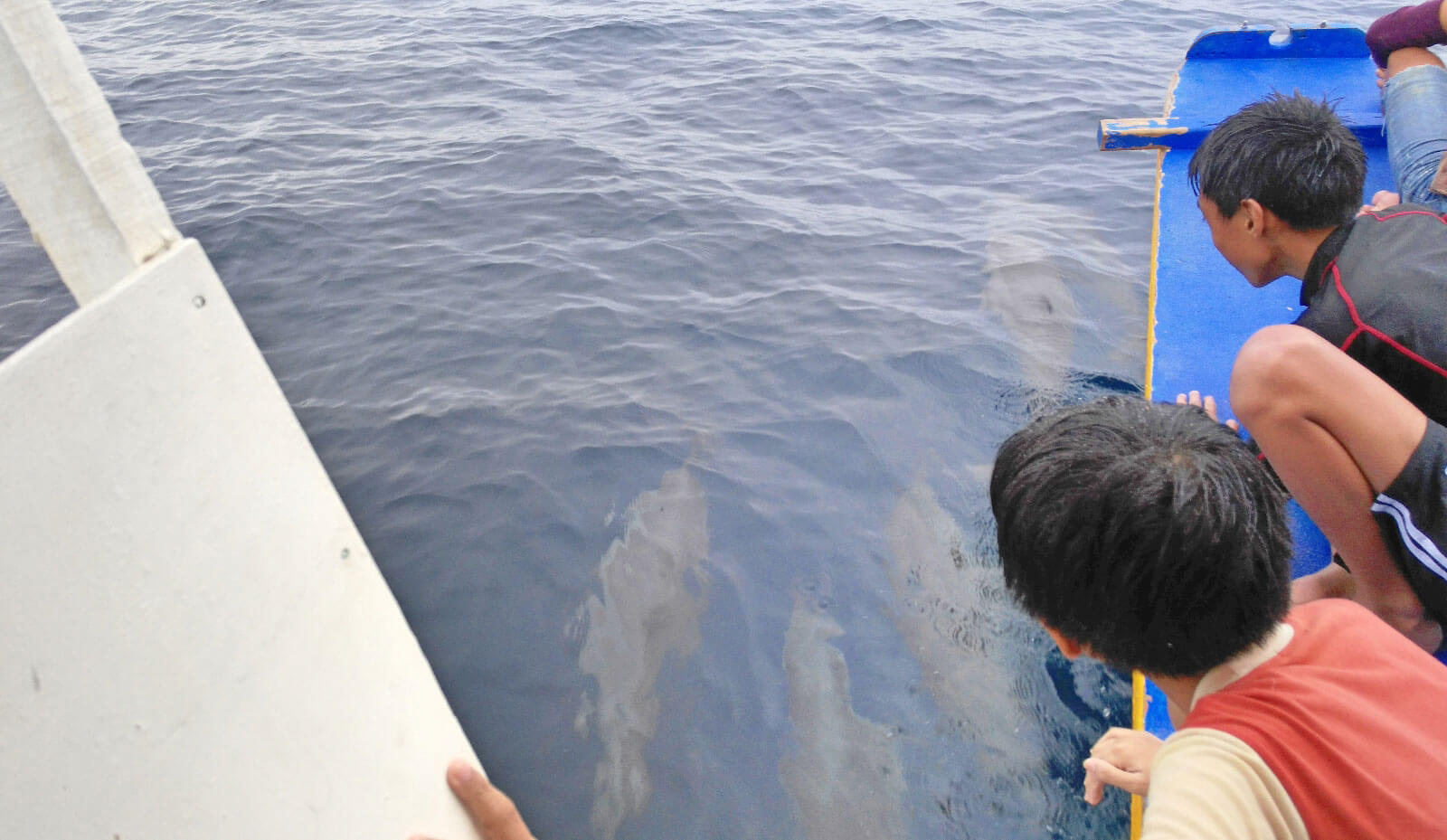 Dolphins! They swam beside our boat as we neared Pescador Island off Moalboal for a day out snorkeling and enjoying the much better preserved underwater marine life in the southern town known for its long strip of white sand beach.

Our welcoming party of at least five dolphins dove and jumped and glided alongside our motorized outrigger banca for a time, entertaining all of us as we clapped, cheered, and took pictures.

We dropped anchor in the shallows of the small uninhabited island of Pescador so our party of 20 plus adults and kids can enjoy swimming and looking at the fish and corals underneath.

The dolphins and Pescador were the highlights of our island hopping experience.

Sad to say that things turned bad from there on.

After a short time in Pescador, the skippers of the two boats we rented for the day told us to climb back as we were going to another popular snorkeling area. They claimed they were bringing us to where the sardines congregate in Moalboal.

Dolphins swim beside our boat as we approach Pescador Island off Moalboal in southern Cebu.

Though we wanted more time off Pescador, we agreed because we believed it would be another satisfying experience. The boat skippers did make the motion of bringing us somewhere else and we saw others there. But after shouting to each other and slowing down a bit, they went off again.

They said they were bringing us to a sanctuary. It was anything but. It was dirty, the corals were dead, and there was something in the sea that stings.

They thought that would discourage us and we would ask to go back. Some of us, including me, did stop swimming and just stayed on the boat. However, some children and a few adults continued to swim. It was then that they asked us to go back up the boat again.

We were surprised and thought they were bringing us to a new location after we complained about the dirty sea. What happened was they already dropped us back at White Beach.

We left at past 8 a.m. and they returned us before noon. Since we paid for two boats, at P2,500 each, for our party of 24 adults and kids, it’s not hard to see we were shortchanged.

PESCADOR ISLAND is an uninhabited islet off Moalboal that is a favorite among divers for its fantastic underwater scene.

The deception, actually, started way earlier. In the beginning, we asked for one big boat that can accommodate our party of over 20 adults and children. That was the day before our trip, and were were at White Beach in Basdaku, Moalboal. We were assured they have such a boat.

On the day of the trip, the person we negotiated with (a mainstay at White Beach) pointed the boat that bears the markings “ACS”. I told him it looked quite small as it was still some distance away and if it would fit all of us. He said yes.

As it is, the boat skipper of the motorized outrigger banca ACS waited until we (not one boat crew offered help) brought all our things aboard before saying his boat couldn’t accommodate all of us.

Keep away from this one, he’s crafty and rude and bad for Moalboal tourism. He has this style of walking away, muttering and mumbling, in the middle of your conversation if he doesn’t like what he’s hearing.

He told us we had to add another boat if we want to go island hopping. With the kids all excited to go and thinking of the hassle of bringing down large coolers and other provisions down from the boat again, we ended up paying for two boats.

ISLAND HOPPING to Pescador Island is a popular activity in Moalboal. Just make sure you negotiate well for the boat you are renting.

This was not our first time in Moalboal and we never had problems in our past trips to White Beach. This was our first time to go island hopping, though, and realized we should have seen to the finer details.

If you’re planning to hie off to Pescador in Moalboal this summer, here are some tips to make the most of your experience. Never agree on a price without looking at the boat first as you can’t rely on them to be truthful. Ask how long you can be out at sea for such a price. Decide on the itinerary and make sure they stick to it.