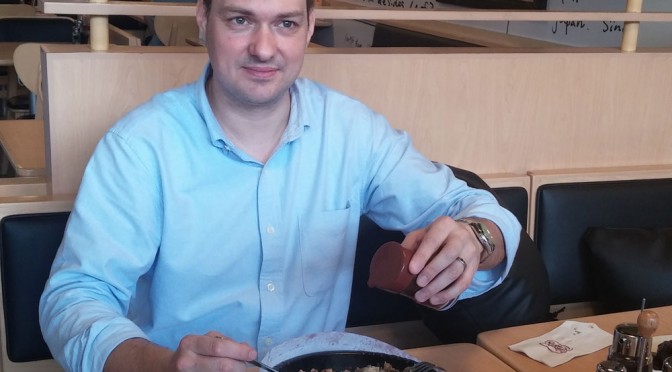 My first time at Pepper Lunch soon after it opened in Ayala Center Cebu, they brought my beef still very red and looking raw. When I told the waiter I wanted my steak well done, he explained I was still supposed to cook it on the hot plate.

This “zizzle-it-your-way” serving style is a distinctive Pepper Lunch feature and allows diners to have control over how their food is done and seasoned, explained chef Jeroen van Straten.

Straten’s company – Benmark Holdings, Inc. – holds the master franchise for Pepper Lunch Philippines. The Pepper Lunch in Ayala’s new wing is the 23rd and newest branch in the country, Straten added during a media get-together in Cebu this week.

The secret to the Pepper Lunch dining experience is the patented Iron Plate, which is heated up to 250 degrees Celsius using a special electromagnetic cooker in just 70 seconds. The plate remains hot for more than 20 minutes, ensuring that your food remains warm up to the last bite.

Straten said this do-it-yourself fast-service dining concept was created by Japanese chef and inventor Kunio Ichinose. His goal was to provide fast and quality food even without a trained chef, and he realized this with the establishment of Pepper Lunch in Japan in 1994.

Pepper Lunch servings also enjoy the advantage of the restaurant’s signature sauces, honey brown and soy garlic. Aside from beef dishes, other choices are chicken, pork and salmon.

At my first Pepper Lunch dining experience, I learned enough to grill the meat on the hot plate but I missed out on the sauce. The best way to have your beef pepper rice is to mix the steak with the rice with its pepper, corn and spring onion toppings and then season it with any or both of the signature sauces.

Not a fan of pepper? Just tell the restaurant crew to omit it from your dish.

I’m not a sauce person but they persuaded me to try it during Thursday’s media launch and it did go well mixed with the steak and pepper rice.

According to van Straten, Pepper Lunch delivers on its “fine steak, great value” promise through strict quality control standards on its imported US and Australian beef.

The restaurant also offers seasonal menus, and this time it’s carrying the typical Filipino fares of lechon and sisig.

Van Straten said response of the Cebu crowd to Pepper Lunch has been favorable and two more branches are planned for next year. They’re also thinking of opening this year a Pepper Lunch Express, which is more like a food court stall where the portions are slightly smaller and prices cheaper.

Although they wanted to put up a restaurant as early as two years ago in Cebu, van Straten said they weren’t able to find the right partner or place.

“Now is the perfect time for us to come to Cebu,” he cited, adding they found the perfect local partner in Pepper Up Cebu, Inc. led by Allen Arvin A. Tan.

Pepper Lunch at Level 4 Ayala Center Cebu is open from 11 a.m. to 9 p.m. from Sunday to Thursday, and up to 11 p.m. on Fridays and Saturdays.

Pepper Lunch has over 200 outlets in Japan and all over Asia, including China, South Korea, Singapore, Taiwan, Indonesia, Singapore and Thailand.

Fuel cost for a three-hour drive from Lapu-Lapu City to Lambug Beach in Badian, Cebu and back for three vehicles carrying 16 adults and kids….

If you want a place where you can drink coffee and do some work or business on the side, then Cafe Namoo is not for…