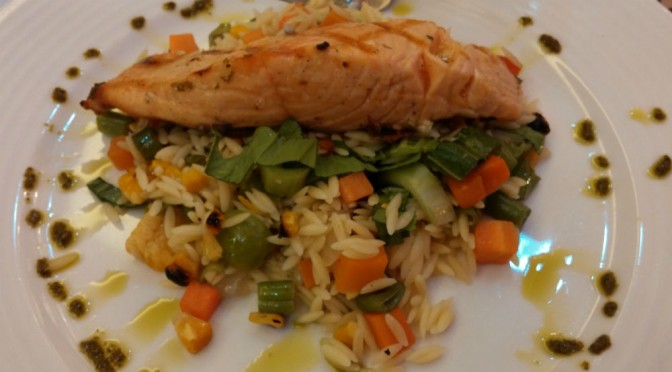 With the number of Cebuanos who dine out growing fast, the Max’s Group, Inc. believes the Cebu market is ready for its upscale American restaurant Maple.

The Salmon Catch dish at Maple. It can be grilled, pan-seared, or blackened and comes with orzo pasta and Texas summer veggies.

She added that Maple Cebu dishes are the same as those served in the Manila branches as they haven’t changed anything in the menu.

Since the restaurant caters to an affluent and upper middle class clientele, Pancake House Group marketing director Ruby R. Bautista said Ayala Center Cebu was the appropriate choice of location for the first Maple branch outside of Manila.

Maple, which opened in Cebu last month, serves breakfast beginning at 7 a.m. It is operated by Pancake House, which manages restaurants like Pancake House, Le Coeur de France, Yellow Cab, Dencio’s, and Kabisera and was recently acquired by Max’s Group, Inc. It is located at the ground floor of Ayala Cebu’s The Terraces.

Lee said the restaurant’s name was inspired by the maple syrup, which is the springboard of a high end pancake house.

Their group, which already operates the Pancake House chain, decided to create a more upscale restaurant and named it Maple, explained Bautista.

The Pancake House and Maple menus, however, only have one thing in common and that is pancakes, Lee cited, adding 95 percent of the dishes are different. Bautista said a lot of Maple’s dishes are flavored with the maple syrup.

Since Maple is a new concept in Cebu, people are flocking to the restaurant in droves.

“We realize this will normalize after a few months. Our patrons love our food. This city is growing closer to our heart and we really want to make this work for Cebu,” added Lee.

If the market can sustain a second location, Lee said they may open another branch in the nearby island of Mactan.

There are, however, no plans yet for a Maple outlet in another part of the country.

“We like to keep Maple as exclusive as possible. It caters to a very select market and we’re keeping it quite small,” she pointed out, adding they’re concentrating on growing the other restaurants in the chain such as Max’s, YellowCab, and Pancake House in international locations.

In Manila, there are only three Maple outlets, said Lee. The first one was opened at the San Antonio Plaza Arcade inside the exclusive community Forbes Park in Makati City back in 2012. The two others are in the Shangri-la Plaza Mall and CommerCenter in Alabang.

According to Lee, the number of dining establishments operated by Max’s Group Inc. after acquiring the Pancake House Group is now close to 500, making it the biggest casual dining company in the country.

Maple’s breakfast food that is served all day includes pancakes, Belgian waffles, and French toast. In its pasta list are: Spaetzle, farfelle, linguine, and agli olio. It also serves soups, salads, burgers as well as club and ciabatta sandwiches.

Diners can choose to order their wines by the glass or bottle.

Desserts can either be apple pie, skillet-baked chocolate cookie, sundae, or bread pudding.

19 Samboan attractions that make it a top Cebu destination

With several waterfalls thriving in the hills and forested areas of Samboan, no doubt a journey to this humble town begins and ends with a…

As one of the few towns located at the southernmost tip of Cebu, Samboan is an unspoiled gem of natural wonders and ancient stone monuments….

1 Comment on Samboan is home to natural, heritage attractions