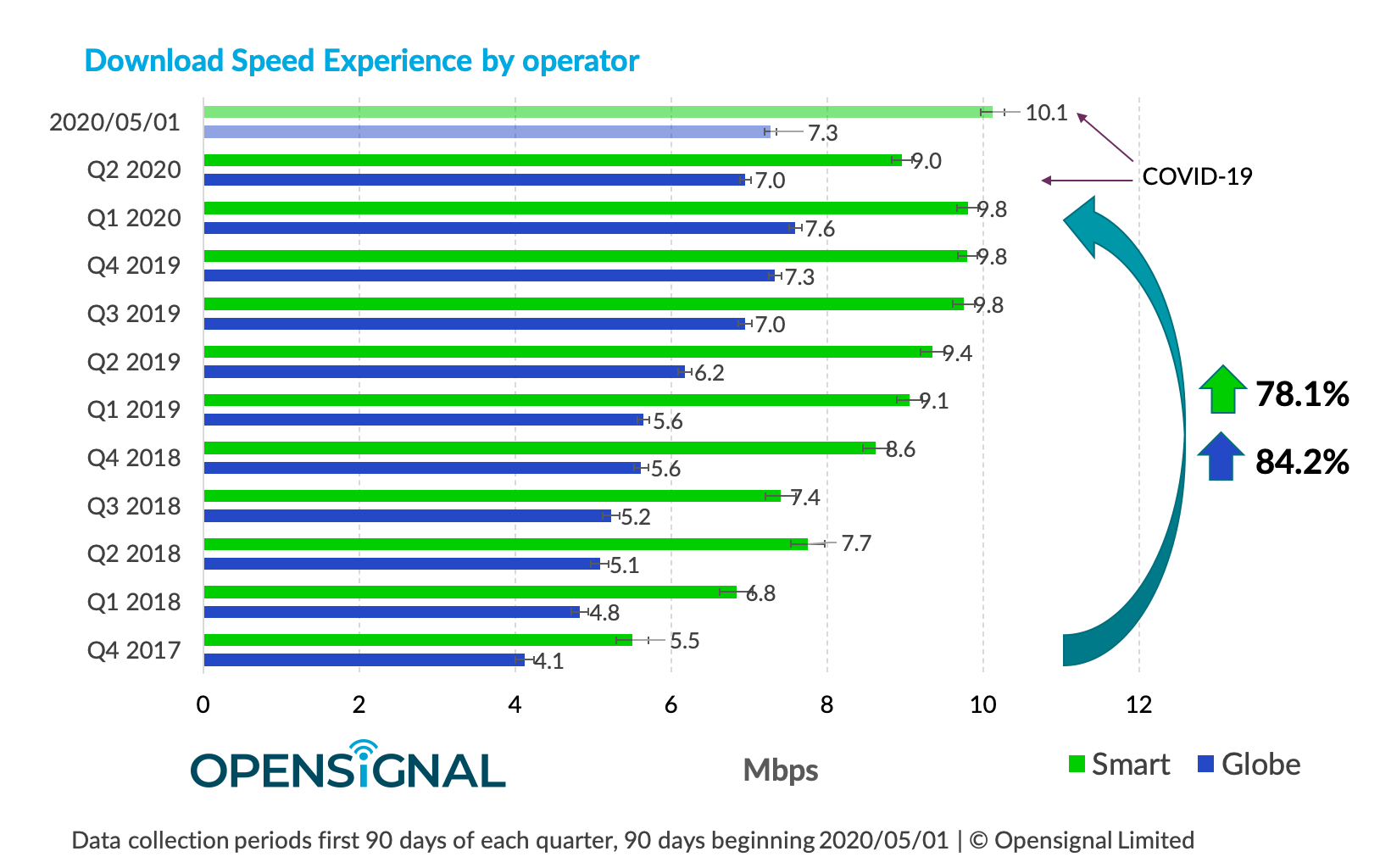 Mobile network experience in the Philippines has had “impressive improvements” since 2017 as Filipinos spent more time on 4G/LTE, according to the latest analysis by independent mobile analytics firm Opensignal.

The analysis, which is available on Opensignal’s website, found that between the fourth quarter of 2017 and the second quarter of 2020, 4G Availability in the Philippines increased by nearly 20 percentage points.

For customers of PLDT wireless subsidiary Smart Communications, Inc. (Smart), 4G Availability—defined as the proportion of time 4G users spend connected to 4G or LTE—increased by as much as 27.8 points, from 59.1% in the fourth quarter of 2017 to 86.9% in the second quarter of 2020.

Smart in the lead

Meanwhile, Download Speed Experience in the country also increased by around 80% between the fourth quarter of 2017 and the first quarter of 2020, with Smart consistently in the lead over the last two years.

“Our users in the Philippines have also seen at least 10 consecutive quarters of improvement in the proportion of time that they spend connected to 4G,” Opensignal said.

Opensignal also cited their recent report, “The State of Mobile Network Experience 2020: One year into the 5G Era,” where the Philippines ranked 67th out of 100 countries for 4G Availability. “This means that the Philippines had a higher score than a third of all the countries covered in the report for this measure of the mobile experience.”

Opensignal stressed the importance of network investments in improving overall network experience. “4G Availability rises as operators invest in their 4G networks and it is very sensitive in this regard, as the most common dead zones users struggle with occur indoors and this is where most of our availability data is collected. Given that 4G speeds far exceed those typically seen on 3G, an increase in 4G Availability is typically associated with a rise in average download speeds,” Opensignal said.

Smart’s 4G/LTE service, when combined with its 3G service, now provides high-speed mobile internet service to over 93% of the country’s cities and municipalities and 95% of the population.

“The results of these speed tests over the past several years show the impact of our sustained network investments, particularly in LTE, in delivering progressively better internet services to our customers. We are continuing that investment effort as we further expand the reach of our LTE service and as we start rolling out 5G,” said Smart President and CEO and PLDT Chief Revenue Officer Alfredo S. Panlilio.

“Despite the challenges of the pandemic, we have continued our network expansion program, which includes steadily extending the reach and increasing capacity of our 4G/LTE network. We have done this by combining the roll out of our physical installations with software systems upgrades that can be done remotely. Moreover, we have also been able to ramp-up our network activities as our operations adjust to the ‘new normal’,” said PLDT-Smart Senior Vice President for Network Planning and Engineering Mario G. Tamayo.

Smart has also been deploying LTE-Advanced and carrier aggregation (CA) technology to improve the mobile internet experience of its customers. A key feature of LTE-A, CA allows the combination of two or more radio frequency bands in order to deliver much faster data speeds to mobile phone users.

In addition to network upgrades, Smart is also partnering with popular smartphone manufacturers in getting more affordable LTE- and LTE-A-capable handsets out in the market. As of June 2020, over 60% of handsets on Smart’s network are already on LTE.

PLDT and Smart’s sustained investments in their network have totaled some P260 billion from 2015 to 2019. In the first half of 2020, Smart further increased the number of its LTE base stations by 10% compared to end-2019. In April, it also increased the capacity of its LTE network by reallocating its assigned 1800 Mhz frequency from 2G to 4G/LTE. As a result, 3,785 Smart base stations are now providing additional capacity for its LTE network.

Moreover, in its ongoing LTE and LTE-Advanced roll-out, Smart has been installing 5G-capable equipment which will enable Smart to deploy 5G easier and faster.

Smart’s mobile network is supported by PLDT’s fiber infrastructure, which provides high-capacity links to LTE base stations and is now nearly 360,000 kilometers nationwide.

Megaworld optimistic on quick recovery, rolls out 4-point plan to rise from pandemic

Property giant Megaworld is optimistic that it can recover quickly from the pandemic next year following reports of coronavirus vaccines to be released before year-end….

With more and more people turning to biking as a mode of transportation during the Modified Enhanced Community Quarantine (MECQ), SM Supermalls has created bike…