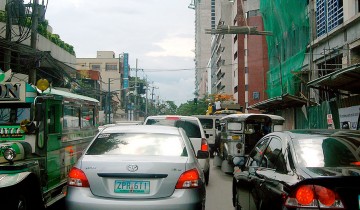 “More people are buying cars but our roads are not getting wider.” — CTMS Chief Frank Brazil, according to Sun.Star Cebu

The Land Transportation Office (LTO), meanwhile, offered to help address Mandaue City traffic. LTO 7 Director Arnel Tancinco said they will first determine how many vehicles use Mandaue City’s main roads during specific hours. The data will help determine the number of enforcers needed to be fielded in specific areas. LTO will also include in report recommendations on the use of traffic signs.

On the implementation of number-coding or color-coding, Traffic Enforcement Agency of Mandaue chief Glenn Antigua said this might backfire.

“It might encourage people to buy more cars, and that will only worsen traffic.” — TEAM chief Glenn Antigua, according to Sun.Star Cebu

IS NUMBER-CODING THE SOLUTION? The chief of the Lapu-Lapu City traffic office is proposing number-coding or color-coding to deal with the traffic gridlock in Metro Cebu. (Creative Commons photo by Dominique Bergeron)

The Archdiocese of Cebu is closely monitoring a priest in Aloguinsan, Cebu accused of molesting a 16-year-old girl inside his car.

Cebu Archdiocesan spokesperson Msgr. Joseph Tan said they also received complaints from the priest’s parishioners in the St. Raphael the Archangel Parish in Aloguinsan. The priest has denied the allegation, according to Msgr. Rey Penagunda, the vicar general assigned to look into the complaint.

Cebu to get P1.5 billion worth of road projects

Davide said Department of Public Works and Highways (DPWH) Secretary Rogelio Singson sent him a message saying the P1.5 billion will be given to DPWH 7. Davide said he will provide more details in his State of the Province Address next month.

The campaign to raise funds for the International Eucharistic Congress (IEC) has gathered P13 million of its target of P20 million. The Piso Para sa Misa ng Mundo (PPMM) campaign is meant to gather donations to help in Cebu’s hosting of the IEC in January 2016.

Organizers project that they will need to spend P250 million for the IEC. Msgr. Joseph Tan, media liaison officer of the IEC, said 2,000 of the 5,000 delegates who registered online have already paid the registration fees.

Following an order by the new Philippine National Police (PNP) chief, police will deploy more officers on the streets in the cities of Cebu, Mandaue and Lapu-Lapu.

Police Regional Office 7 Director Prudencio Tom Bañas said workers at the headquarters will be assigned to the streets to increase police visibility.

“In line with the directive, we will make plans that our own people here in the regional headquarters will go to the streets in the different cities in Cebu, Mandaue and Lapu-Lapu.” — PRO 7 Director Prudencio Tom Bañas, according to The Freeman

The Freeman: More cops on the streets

“It’s now becoming very obvious that Rama, et.al are moving heaven and earth to delay the disposition of the case calculated to reach the 90-day period given to resolve the case and the 45-day ban for suspension of public officials.” — Lawyer Reymelio Delute, who filed complaint

“Oversupply is already felt, that’s why some developers have pushed back with their launches.” — Colliers International research and advisory services director Julius Guevara, according to Sun.Star Cebu

“I’m confident we will not have difficulty in hiring talents for this type of services because for one, Filipinos are highly-trainable and quick learners.” —  Scott Johnson, Azpired BPO chief executive officer.

» Local developer to build 100 serviced apartments near Cebu IT Park

Mactan cafe brings a ‘taste of Singapore’ to Cebu

It will be “very hot: in the days ahead, the Philippine Atmospheric, Geophysical and Astronomical Services Administration (PAG-ASA) warned the public. PAG-ASA Visayas Director Oscar…