MyStory: A Mormon covers the Sinulog and writes about religious co-existence 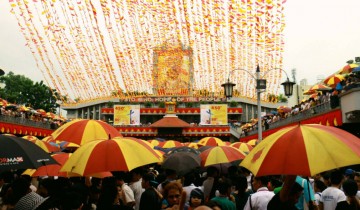 (Editor’s note: Nel Mozol is an InnoPub Media intern from the University of San Jose-Recoletos. He is a Mormon or a member of The Church of Jesus Christ of Latter-Day Saints. We asked him to attend a Sinulog event and write about it from his perspective.)

The Philippines has always been heralded as the cradle of Catholicism in Asia. Walk around and you’ll meet children named Niño, Jesus, Mary and Magdalene.

A ride on a jeepney will offer a peek into this deep Catholicism – often you will see a miniature Santo Niño mounted on the dashboard, a rosary wound on the steering wheel or hanging from the rear-view mirror.

A sea of people brave the downpour to attend the mass at the Basilica del Sto. Niño. (USJR MassCom Intern Nel Mozol)

Most of the Philippine heritage sites are even Catholic churches, hinting on the strong presence of Catholicism in the country.

And here comes us, the non-Catholics. We number less than 20 percent of the population, according to a 2013 SWS survey. We do not get as many holidays as Catholics do. But the best thing is that we co-exist nicely with them.

As a Mormon, I’ve often been teased on why we give importance to giving tithes or why we don’t make the sign of the cross and down to the more weird ones like why David Archuleta is in our church. I don’t take those jokes seriously as there are more people who understand us and respect our belief.

Also out of curiosity, I propelled myself to the Basilica Minore del Santo Nino to attend a novena mass. It wasn’t an easy feat going there, it was raining so hard, there were almost zero jeepneys available, and I had to walk and brave the heavy downpour.

I have always heard naysayers exclaiming that most Catholics don’t take their church seriously as they do not bring Bibles and hardly observe the dress code.

In there was a sea of people not minding the heavy rain just to attend the mass. Not serious? A lot of people cried while singing the Gozos. Not counting those people who were weeping and shaking while lighting the small candles, praying, and asking for guidance from the Lord God.

The dress code violation was half true, but mostly violating it were foreigners. It is worth noting that despite looking “manang” by modern standards, a lot of mothers, including their daughters, preferred to wear skirts that reach below the knee.

Good thing the Basilica also provides umbrellas to keep churchgoers from getting wet.

The priest’s homily was centered on the penance of sins. In this modern time, where we casually commit sin without knowing it, the homily served as reminder that we should be more mindful and please the Lord with all the good things that we do.

The homily talked about the same subject common in many religions –praising the Lord and avoiding sin.

What totally stood out for me is the variety of the churchgoers. There were students in uniform, LGBTs, old women, and the entire sort of people you come across on any given day.

It is amazing how despite their differences, they were brought together in the same place, at the same time, not minding the environmental conditions for one cause – that is praising the Lord God.

My whole experience taught me one thing – co-existence. The world is wonderful. It is just too sad that we are divided by our beliefs, traditions, religions and views.

It is so sad that we are creating an invisible barrier among ourselves, that blinds us to what could be.

The world is amazing. Wouldn’t it be more amazing, however, if we choose to share it peacefully with the rest of humankind, regardless of religion?

SINULOG SELFIE. The author (front) with fellow InnoPub Media interns from the University of San Jose-Recoletos. 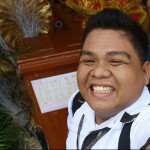 Nel Joseph Mozol is a senior Mass Communications student of the University of San Jose-Recoletos. He is self-confessed tech geek, design enthusiast and music nuthead.

Nel Joseph Mozol is a senior Mass Communications student of the University of San Jose-Recoletos. He is self-confessed tech geek, design enthusiast and music nuthead.

Smart Prepaid kicks off ‘Live All Out’ season in Sinulog 2015; subscribers get chance to win iPhone 6

Smart Prepaid subscribers are up for exciting perks and awesome experiences this 2015 as Smart Communications, Inc. (Smart), the country’s wireless services leader, kicks off…

1 Comment on Smart Prepaid kicks off ‘Live All Out’ season in Sinulog 2015; subscribers get chance to win iPhone 6

After jeepney fares were slashed to P7 in Central Visayas, the Land Transportation Franchising and Regulatory Board (LTFRB) will now look into cutting the fares…