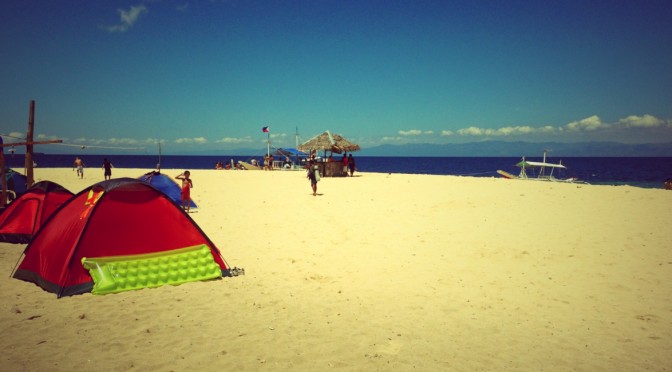 Sand is not the most comfortable of beds but our weekend camp-out on White Beach or Basdako in Moalboal, Cebu had its benefits.

It was cheap as a tent cost only P500 to rent, afforded us a front seat to a spectacular view of the night sky, and gave us first crack at the morning sea.

What’s even better was that all of us, kids in our party included, had a lot of fun.

Moalboal’s Basdako or White Beach is a long stretch of coast covered with fine white sand. It hosts a lot of cottages and resorts that offer a range of accommodations, from spartan to luxurious.

In our previous trips to Basdako in Barangay Saavedra, Moalboal, Cebu, we stayed in resorts like Hale Manna and Barefoot so it was our first camp-out experience on the beach.

CAMPING ON THE BEACH. You can rent tents for P500 a night and camp out in Basdako or White Beach in Moalboal. (Photo by Max Limpag)

Since our party of seven adults, four teenagers, and eight children travelled on a weekend to Moalboal with no prior reservation for a room, we went directly to White Beach to find somewhere to stay for the night.

The 100-kilometer drive to the Cebu town from Lapu-Lapu City took us close to three hours, including a short time spent at Molave Milk Station in Barili to stretch our legs.

From the Moalboal town center, we proceeded another six kilometers to Basdako. Along the way, we stopped by a barangay outpost to pay a P5 charge for each person in our party, small kids included.

Upon arriving at a public area of White Beach, where the cottages are located, the adults in our party had to pay P10 each and a parking fee of P60 for both vehicles.

We were able to get a cottage for only P1,200 but it was austere at most. It had one medium-sized bed, a fan, and a comfort room but it was not clean. You had to buy water for your toilet and shower needs at P25 per container.

What we did was use the common toilets and shower rooms for a fee per use.

Since we couldn’t fit in the room, some us decided to rent tents. We saw some group with their tents already up and thought it would be a great idea to sleep out under the stars.

WHITE BEACH. Basdako in Moalboal is one of the best white sand beach coastlines in Cebu. This one’s at the public beach area. (Photo by Max Limpag)

Camping out on the beach

My husband and I and our two kids decided a tent would be fun so camped out we did. All the sleeping bags were taken so we made do with oversized beach scarves and towels.

Down on the sand with only the tent and thin piece of cloth between you is not the most comfortable of arrangements but we still managed to get a good night’s sleep after a wonderful swim in the warm sea.

We had a lot of company on the beach in the huge number of tents put up. Others lay down on mats in the open.

While we were grilling our dinner on the beachfront, there was a power outage. Locals say the outages are common but they only last an hour or so.

It happened while we were cooking so there were exclamations of exasperation.

One of the children silenced us by saying ‘look’ and pointing at the sky. Up there, with the electricity out, is a black sky twinkling with a million stars and it was the most beautiful sight we’ve seen in a long time.

You can choose to drive or commute by bus to Moalboal. Buses leave for the southwestern town of Cebu several times daily from the South Bus Terminal in Cebu City.

Bus fare is a little over a hundred pesos. Passengers pay a fee of five pesos each at the terminal.

If you have time, take a side trip to Barangay Matutinao in Badian. It is one town farther away and home of the popular Kawasan Falls.

Moalboal’s Basdako or White Beach is a long stretch of coast covered with fine white sand. It hosts a lot of cottages and resorts that offer a range of accommodations, from spartan to luxurious. (Photo by Max Limpag)

Our visit to La Vie Parisienne was quick and unplanned but checked out we did this new Cebu French bakery, deli, and wine library. La…

When they served my buko shake in its original green shell, I knew I would enjoy my lunch at Cafe Marco in Marco Polo Plaza…