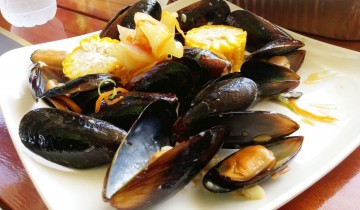 Cebu lechon belly, seafood like shrimps and shellfish, native chicken, and pork barbecue are just among the Cebuano dishes you can have at Mactan Alfresco, a newly-opened foodstrip at the Megaworld township development Mactan Newtown.

“We want to help Mactan tourism and this is one way that people will be able to better appreciate Mactan,” she said, citing that foodstrip tenants will be serving lunch, dinner, and possibly beer and other drinks.

According to her, the target is for all 14 tenants to start operations in two to three months.

The following restaurants have opened branches at Mactan Alfresco:

The Alfresco branch is Orange Karenderia’s third in Cebu, said Michael Pato, one of the restaurant owners.

“Opening Orange Karenderia is our way of bringing back traditional local food in restaurants. Seafood like tuna and other deep sea fishes are abundant in our country and we serve them at our restaurants,” he pointed out.

Cebu is known for its traditional lechon and, lately, the lechon belly variation (above).

As part of the pioneering group of the Mexican restaurant Maya, Uy said he has earned enough experience in Mexican food preparation.

“What we boast of at Meximama is we make our own salsas, tortillas, and nachos,” he added. Meximama serves chuletas, costillas de cerdo, pollo ala plancha, honey and chilli wings, fried fish fillet, mexicali, nachos en salsa roja, and taco salad.

Meximama has another branch in Marina Mall opened just three months ago.

As a purely Cebuano-owned restaurant, Choobi Choobi takes pride in its homegrown shrimps.

Gwen P. Deri, Choobi Choobi franchise executive, said they serve all kinds of seafood. The restaurant’s shrimps are grown in the owner’s prawn farms in the different areas of Cebu.

Including the one in Alfresco, Choobi Choobi already has four outlets in Cebu. It is planning to put up a company-owned branch in Manila and franchising additional outlets there, Deri added.

SHRIMPS are the specialties of Choobi Choobi.

Conching’s started out as a small ihaw-ihaw stall in Taboan way back in 1968. Its signature dish is the native chicken, which can be roasted or prepared as tinola or stew.

Harold Geronimo, Megaworld head of public relations and communications, said Mactan Alfresco is in line with their goal to promote food tourism in Mactan.

“We are positioning Mactan Newtown as a tourism hub. We want people to come here and discover local Cebuano food. We want them to discover how good Cebuano food is. They don’t have to go far to have good food,” he added.

The next big development at the township will be the opening of 8 Newtown Blvd., which is a mixed use condominium with commercial retail, office, and residential components.

Among the other exciting features coming soon at Mactan Newtown: Plaza Magellan, a mall that will feature a museum and connect to the Liberty Shrine of Lapu-Lapu City and the development of its 11-hectare beachfront property that will be home to a beach club as well as boutique and resort hotels.

OPEN AIR DINING. The Mactan Alfresco in the Mactan Newtown is inspired by the popular hawker centers in Singapore.

#DigitalNomad hotspot: Figaro in IT Park

If you are within the IT Park in Lahug, one of the best places to work in is Figaro in The Walk. Whenever we need…

Since the Pope already recently visited the Philippines, he is less likely to visit Cebu next year for the International Eucharistic Congress (IEC), according to…