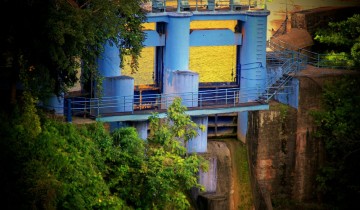 Due to the dry season, Buhisan Dam is now at a “critical level” but the Metropolitan Cebu Water District (MWCD) assured consumers that there is sufficient water supply.

After the rerouting plan at the North Reclamation Area was carried out, Mandaue City’s traffic congestion become heavier compared to Cebu City whose traffic condition is described as “manageable.”

Some taxi drivers and operators in Cebu refuse to follow the P30 flagdown rate, calling the Land Transportation Franchising and Regulatory Board (LTFRB) 7 order unreasonable. The board urged passengers to report these taxi drivers.

The Buhisan Dam is at ‘critical’ level due to the dry season. (Creative Commons photo by LeylanR.)

As dry season starts, Buhisan Dam is drying up

MCWD confirmed that the Buhisan Dam is drying up and is already at a “critical” level. The dry season has just began.

There will be no water shortage, MCWD assured, because it gets additional water from the Carmen Bulk Water Supply Project. Buhisan Dam is not the main water source of MCWD.

“On our own, we define it as a critical level, but we would like to assure the consumers nga di gyud maapektuhan ang ilang supply even if modugay pa ang dry season (that their supply will not suffer, even if the dry season lasts long).” –MCWD public affairs manager Charmaine Rodriguez-Kara

Still, MCWD is asking the public to conserve water, such as by recycling water to flush toilets.

Traffic in Mandaue heavier than in Cebu City

Cebu City Traffic Operations Management Executive Director Rafael Yap said that heavier traffic congestion is felt in Mandaue City while the traffic in Cebu City had turned “manageable” after the rerouting plan at the North Reclamation Area was implemented.

Hence, there is a need for coordination between the traffic organizations of the two cities. The identified bottlenecks are found along Ouano Avenue near the Aboitiz Football Field.

Some taxi drivers refuse to give P10 rate cute

Some taxi operators and drivers in Metro Cebu did not follow the order of the Land Transportation Franchising and Regulatory Board (LTFRB) 7 to lower the flagdown rate from P40 to P30, saying it was unreasonable.

With traffic worsening in Metro Cebu, it has become highly desirable to live close to the workplace and the children’s schools. Eagles’ Nest, a project of premier property developer Primary Homes, Inc., provides owners with the convenience of a home located in the heart of the metropolis.

Taxi drivers or operators who will refuse to reduce their flagdown rate by P10 starting today, as ordered by the Land Transportation Franchising and Regulatory…