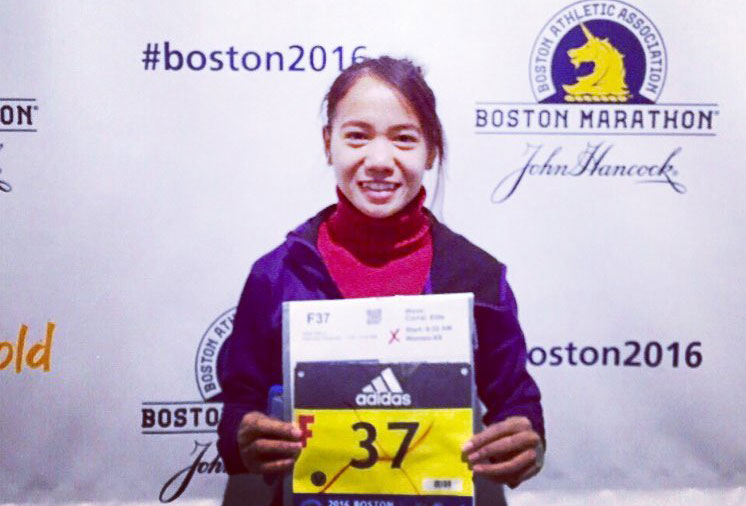 Cebuana athlete Mary Joy Tabal made her mark in the national and global stage of running in 2015. Her accomplishments gave Cebuanos something to cheer about.

Tabal shone the brightest among the top athletes of Cebu in 2015 and earned the “Athlete of the Year” award from the Sportswriters Association of Cebu (SAC) in the 36th SAC-San Miguel Beer Sports Awards at the Robinsons Galleria Cebu this evening.

“I’m honored to be given this award (Athlete of the Year). I think 2015 has been good to me. I’ve accomplished some major races which helped me to where I am now,” Tabal said after finishing the 2016 Boston Marathon last Tuesday where she ranked 21st among 50 female elite runners of the world.

The 26-year-old Tabal won silver medal in the women’s marathon of the 28th Southeast Asian (SEA) Games in Singapore in June 2015, despite being a first-timer on the biennial sporting event.

The all-expense paid trip to 2016 Boston Marathon was her prize for winning the Milo Marathon Finals in December 2015.

The win also made Tabal the third-winningest female runner in Milo Marathon national finals next to Saragay and Martes, who have five and four titles, respectively.

In November of 2015, the former sprinter of Southwestern University (SWU) finished fourth overall out of 17 elite runners in Asia in the Great Eastern Women’s Run in Singapore. She was able to ink then her best time in half-marathon which was 1:19:32. Her new best time now in 21K is 1:18:44 set in Japan this month, which could potentially become the new Philippine record for women’s 21K.

Tabal bucked the odds in Great Eastern Women’s Run and came out as the fastest Filipina on the race, beating the Filipina runners who were sent as representatives by Philippine Amateur Track and Field Association (PATAFA).

Tabal also had impressive runs in Hong Kong Standard Chartered Marathon and L.A Marathon on the first quarter of 2015.

Mary Joy Tabal finished the Boston Marathon 21st among 50 female elite runners of the world. (Photo from her Instagram account)

The native of Brgy. Guba, Cebu City came second in the women’s division of the Hong Kong Standard Chartered Marathon. She finished 27th in the women’s overall ranking and 12th in the 25 to 29 division in L.A Marathon which was joined by runners from 50 US states and 60 countries.

With all the accomplishments she had in 2015, Tabal did not forget where she come from and has worked with Cebu City Sports Commission (CCSC) to teach the fundamentals of running to the kids in the mountainous areas.

Tabal together with coach John Philip Dueñas, CCSC and Department of Education (DepEd) started the grassroots program in summer of 2015. The first batch of students was from Brgy.Guba with more than 100 kids introduced to running.

With the efforts of Tabal and the grassroots team, some of these kids are now taking running seriously, winning fun runs and sporting meets.

“I am very blessed in 2015. So far, it was the most special year for me. I think my discipline, focus and determination have paid off for me. I was also blessed because of the people who support me,” said Tabal.

Tabal has come a long way; the runner who once collapsed at the finish line on her first 10K run is now the country’s current top female marathoner.

Special citations were also handed out to various individuals who made their marks in their respective fields.

Make Your Own Havaianas 2016 turns Japanese

April marks the onset of full-on sizzling summer in the Philippines. It also marks one of the most anticipated events in the calendar, Make Your…

Get the Sony PS4 with a PLDT HOME Fibr bundle

Following a historic year marked by successful partnership launches with renowned global brands like iflix and Fox Entertainment Channels for content, and Microsoft and Intel…