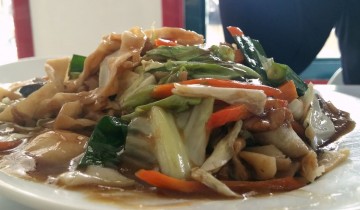 On our way to Santander, Cebu, we looked for and dropped by Maria’s Batchoy in the town of Dalaguete after hearing from friends and acquaintances that it serves exceptional pancit canton.

We found it easily enough in the town center, and what we heard about the pancit canton was true. The dish – which you can order in its regular or special version – has exactly the right balance of noodles, vegetables, and meat ingredients mixed with a special sauce.

Another thing that sets the dish apart is the noodles or pancit used by the eatery. It’s flat and thin and not rounded like most noodles.

PANCIT CANTON SPECIALTY. Maria’s Batchoy in Dalaguete is known for its delicious pancit canton. It makes its own noodles.

Gesilieta M. Besin, who started working at Maria’s Batchoy less than a year after it opened on May 8, 1997, said they make their own noodles for the canton dishes.

The cooks, brothers Undo and Dodong Beduya, are responsible for this special ingredient. Undo has been the cook since Maria’s Batchoy opened in 1997, and his brother Dodong was recruited when the clientele grew, said Ara Sanoy, another eatery staff.

In the Maria’s Batchoy menu, there’s the regular Pancit Canton and special servings like the Sun Yat Sen Canton. The difference is there are additional ingredients in Sun Yat Sen, such as ham. There’s also Chicken Shrimp Canton, which uses the same noodles as the other pancit canton dishes.

Batchoy is another bestseller of the eatery, as customers who come in the wee hours of morning usually order this, added Sanoy.

CRUNCHY DISH. Among the eatery’s bestsellers is this crunchy pinakupusang adobo.

Other things in the menu include soups, such as bird’s nest, noodle soups other than batchoy like lomi and mami, and chopsuey. Maria’s Batchoy also serves typical Filipino, specifically Cebuano, fare, from pinakupsang baboy, bistek Bisaya (local beef steak), to crispy pata.

Maria’s Batchoy is open 24 hours so if you ever find yourself in the southern part of Cebu, you know there is a place in Dalaguete where you can get something to eat no matter what time it is.

Another plus: it is airconditioned and spotlessly clean. In our southern Cebu trips, I have yet to find a similar establishment with a cleaner washroom. Maria’s Batchoy is owned by the Barola family in Dalaguete, Cebu.

OPEN 25 HOURS. Maria’s Batchoy, which is located at the town center, is open 24 hours and has Wi-Fi connectivity.

Charges have been filed against an Australian national, his underage girlfriend and parents involved in trafficking and pornographic activities of children in the municipality of…

Whether you’re getting a starter house or a more permanent home, the Pueblo de Oro Cebu Communities in Lapu-Lapu City provides a wide range of…