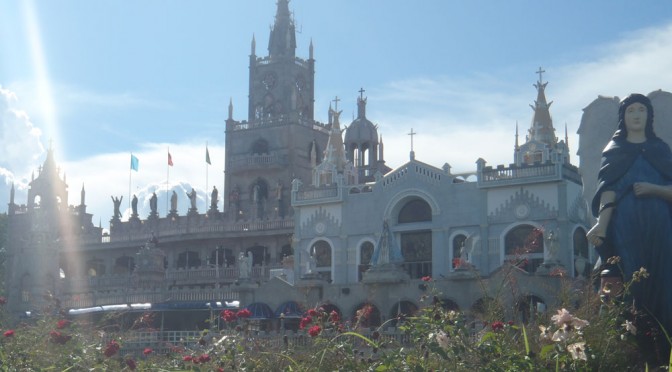 Sanctuary Castle of Mary in the village of Simala in Sibonga. The Virgin Mary's shrine is a pilgrimage center of Marian devotees. Click on photo to enlarge. (PHOTO BY MARLEN LIMPAG)

A popular pilgrimage destination of Marian devotees in Cebu is Mary’s shrine in the village of Simala in Sibonga.

The shrine is located inside an imposing and huge 3-level concrete structure that Fra. Ma. Martin call as Sanctuary Castle of Mama Mary, which also houses the Monastery of the Holy Eucharist Church.

Fra. Ma. Martin, one of the Marian monk caretakers of the shrine, said they started their mission in Simala in 1996, but pilgrims started flocking in large numbers to Mary’s shrine beginning in 2005. This was mainly due to what has been reported as miraculous incidents involving the Virgin’s image that was said to have cried tears.

Mary’s shrine occupy a big portion of the castle. Pilgrims line up and wait for their turn to address their prayers and petitions to what they consider miraculous images of Mary in the shrine.

Inside Mary’s shrine are glass-covered cabinets that hold letters and keepsakes attesting to the miracles that the Virgin Mary has worked in the lives of the devotees. The letters thank the Virgin for healing grave illnesses and helping in work or school matters, among other things.

Sculptures of the Virgin Mary as well as Jesus (in various ages) and Joseph also decorate the shrine. A devotional museum displays different Marian devotions as well as costumes of Mary.

Fra. Martin said pilgrims consider the Birhen sa Simala miraculous so they make a visit there part of their devotion. Mary’s shrine, according to Fra. Martin, is open from 8 a.m. to 6 p.m.

Except for him and one other monk, who oversee the running of the shrine, the others do not the convent since this is part of their penitence. He said the monks have been developing the abandoned hills of Simala since 1996 through deep prayers, sacrifices, and manual labor.

Devotees or guests who want to check out this shrine must not wear sleeveless shirts and dresses or shorts for they will not be allowed inside. They must also be prepared to remove their footwear before entering Mary’s prayer room.

On the castle grounds is a replica of the well of Nazareth, where Mary was supposed to have fetched water for her family.

Sibonga is 50 kilometers southeast of Cebu City and may be reached via any of the buses that leave regularly for Sibonga from the South Bus Terminal along N. Bacalso Ave. in Cebu City. Bus fare is less than a hundred pesos per passenger.

Mary’s shrine is a few kilometers away from the Sibonga town center and may be reached through motorcycles for hire or public tricycles.

Cebu is an architectural feast of Spanish period churches in the styles of late Baroque, neoclassical, Greco-Roman, and Gothic or a combination of their elements….

When people talk of diving in Cebu, they usually mention the small town of Moalboal in the province’s southwestern coast that is famous for the…