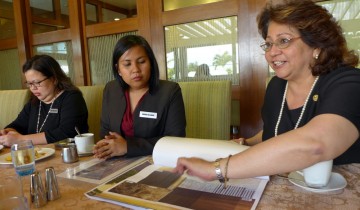 An even bigger ballroom with sophisticated sound system, more seating and music choices for Blu Bar and Grill, and upgrades to the five-star hotel’s 101 premium rooms and suites are just among the many changes at Marco Polo Plaza Cebu this year and in 2016.

She said work on the hotel’s Grand Ballroom started in March and is being done in phases. The first phase is set for completion by August.

Once done, according to Najar, the ballroom will have an expanded area of around a thousand square meters and be able to accommodate 800 guests, from the original 500, in a banquet set-up.

“Cebu is a top destination in the Philippines. We decided to upgrade the Grand Ballroom because the MICE (Meetings, Incentives, Conventions and Exhibits) market for regional, national and even international groups is growing fast. The need for a bigger venue is there and management wanted to address that,” she said. The MICE market contributes 40 percent to hotel revenues.

Part of the ballroom renovation is the upgrading of the audio-visual equipment, and this will allow the hotel to set different moods for different events through lighting and music.

Although it will be a much bigger Grand Ballroom, it would still be able to accommodate smaller functions, Najar said, saying that it is designed in such a way that it can be divided three ways.

Marco Polo Plaza Cebu was also one of the three major hotels identified by the national organizing committee for the Asia-Pacific Economic Cooperation (APEC) 2015 events from August to October this year.

Najar said that during the APEC meetings, at least 50 percent of hotel rooms will be set aside for delegates.

Hotel operations will go on as usual for other guests during this period but more stringent security measures will be in place, she also said.

GRAND BALLROOM. Marco Polo Plaza Cebu general manager Julie Najar shows MyCebu.ph plans for the grand ballroom redesign and expansion. With her is communications manager Manna Alcaraz. Once done, the ballroom will have an expanded area of around a thousand square meters and be able to accommodate 800 guests, from the original 500, in a banquet set-up.

Started in 2008, the Blu Bar and Grill offers fantastic views, good food, and quality entertainment, said Najar, adding it has been steadily gaining popularity. Blu Bar and Grill was named by the Philippine Tattler as one of the country’s best restaurants.

Improvements to Blu Bar and Grill, according to Najar, will start on May 15 and result in a much bigger area, one that can now seat 150 persons from the original 60.

It will retain its alfresco space but will also now have an indoor dining area with a private room for exclusive dinners and events.

According to Najar, the outdoor dining space will have a roof covering so diners wouldn’t be disturbed even if it rains. After the renovation, the restaurant will have different zones, each with different furnishings, lighting, and music to cater to a wide range of clientele.

In line with the Marco Polo’s core value of continuous improvement, upgrades will also be introduced to the Cebu hotel’s 101 premium rooms and suites, Najar said. The hotel’s 228 deluxe rooms had already undergone a makeover last year.

Najar said that after the renovation, the rooms will be able to meet “international standards” and give every convenience to guests.

They will have new furnishings and upgraded with the conveniences of new technology in relation to communication, she said. The hotel is working closely with PLDT and Smart Communications, Inc. to bring this about.

With little funfare, the Calayan Medical Group opened in Cebu last week and made available some aesthetic and wellness as well as dermatology services. The…

To help support its scholars, the Primary Group of Builders is staging PrimaryHomes Home Run 2015, a fun run that features three race distances, this…