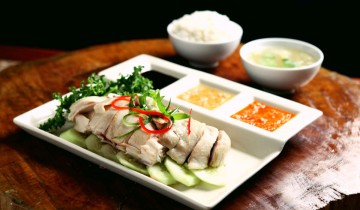 It began with an eye dotting ceremony for the guests of honor, was followed by the lion dance and firecrackers, moved on to the Yee Sang or Prosperity Toss, and ended with the dragon dance as Marco Polo Plaza Cebu welcomed the Chinese New Year in lively ceremonies last Wednesday, February 18, 2015.

These are all Chinese traditions performed to usher in the Lunar New Year, which fell on February 19 this year, and bring good fortune, said hotel public relations officer Mia Ali.

For the Yee Sang, five-star hotel Marco Polo prepared a wok-shaped container but multiplied several times in size and filled it with a mix of shredded colorful vegetables, raw fish, condiments, and other ingredients.

Twelve people led by Marco Polo Plaza Cebu general manager Julie Najar led the Yee Sang ceremony, which involved tossing the salad mix as high as they can using chopsticks and saying (or thinking) out dreams and aspirations as called for by the tradition.

I see now why they call it the Prosperity Toss. It was my first Chinese New Year celebration so it was all very strange but interesting nonetheless.

YEE SANG. The Yee Sang or Prosperity Toss was among the highlights of the celebration. The ceremony  involved tossing this salad mix.

Another way that Marco Polo welcomes the Chinese Year of the Sheep is through another Cafe Marco culinary journey featuring the best of Chinese cuisines. Up until February 22, 2015, Cafe Marco will serve a grand feast of authentic Chinese dishes on top of its international spread for the same price as the regular buffet.

Cafe Marco serves buffet breakfast, lunch, and dinner and from the first day of the Chinese Year of the Sheep up to Sunday, February 22, it’s including more Chinese dishes in the spread.

DRAGON. This can be found at the hotel lobby.

Promote Cebu Province as an investment destination, attract investors, and spread the development from urban to rural areas are just among the goals of the…

In what is believed to be a case of mistaken identity, a German national was fatally shot inside a fastfood outlet in Talisay City. Two…