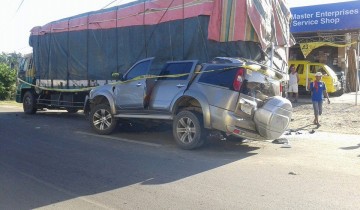 Instead of giving a citation ticket, two traffic enforcers from Mandaue City allegedly extorted money from a foreigner. This was caught on video that was uploaded to YouTube.

Meanwhile, Cebu City councilors agreed on the need for a scientific study of traffic in the Banilad-Talamban corridor after noting that the “no left turn” policy being implemented there is not supported by data.

EXTORTION? Part of the video uploaded to Youtube that allegedly shows 2 Mandaue traffic enforcers asking for P2,000 from a foreigner instead of issuing a citation ticket for taking a u-turn on a portion of the North Reclamation Area where it is not allowed.

On Jan. 27, 2015, a foreigner uploaded a four-minute video of two Mandaue City traffic enforcers for allegedly asking him and his girlfriend P2,000 instead of giving them a citation ticket. Here’s our story on the incident, it includes the video and screengrabs of it: Caught on video: 2 Mandaue traffic enforcers accused of extorting P1,500 from foreigner over traffic violation

For not issuing the ticket to the couple who ignored a No U-turn sign on Ouano Avenue in Mandaue City on Jan. 18, 2015, the enforcers, Arman Gallardo and Gringo Pinados, have been relieved of their posts.

The two enforcers have denied the allegation, saying they did not issue a citation ticket that comes with a P200 fine after the girlfriend asked them for consideration.

Edwin Ermac, chief of the Traffic Enforcement Agency of Mandaue (Team), explained that Team personnel are generally considerate to foreigner because they might not be familiar yet with the city’s local traffic rules and regulations.

“They have to prove to the investigators that they did it in good faith and not because they were given money.” — TEAM chief Edwin Ermac on the failure by traffic enforcers Arman Gallardo and Gringo Pinados to issue a citation to the foreigner who accused them of extortion

Still, he urged the foreigner to file a complaint. He said the video clip, with its poor audio, is not enough proof the traffic enforcers extorted money.

The Cebu City Council, in an executive session, recommended that a scientific study, including vehicular count and other related statistics, be made on Cebu City traffic to guide city planners on how to effectively solve the congestion in the Banilad-Talamban (BanTal) corridor.

“What we’re doing now is just experimenting and not getting the whole picture. We need experts to map the whole thing out. We need assistance.” — Businessman Bunny Pages, who also heads the BanTal Task Force created by Mayor Michael Rama

DRIVER FELL ASLEEP. This SUV slammed into this truck parked on the national highway in Bogo shortly after midnight yesterday. Police said the driver, Marianne Harman, told them shortly after the accident that she fell asleep on the wheel. (Photo taken by Bookie Batuigas and posted on the Medellin local government Facebook page)

1 dies as SUV crashes into parked truck in Bogo City

A sports utility vehicle (SUV) slammed into a parked truck on the national highway in Bogo City at 1:45 a.m. yesterday, killing the passenger and leaving the driver with serious injuries.

The victims were on their way home to Medellin from Cebu City. Layson said the SUV was running at least 80 kilometers an hour, quoting bystanders. It slammed into the truck, which was loaded with polyvinyl chloride pipes and was parked by the roadside after it encountered engine trouble last Wednesday.

Police said they were able to talk to Harman right after the accident and she told them she fell asleep on the wheel.

The cafe relies on customers to leave their payment and collect the correct change even if no one is around to serve them. This initiative is the first of its kind for a police office in the region.

“This promotes honesty and transparency and should also be reflected in every government organization.” — Cebu Governor Hilario Davide III

“There is no reason to stop a project on the basis of fears that we could not have funds. We will not build outright, it will progressively build. We really need a hospital. It’s the mayor’s prerogative to bring and implement the project because it’s within his mandate.” — Mayor Michael Rama on the building of the new CCMC

Sun.Star Cebu: Mandaue City Councilor Editha Cabahug and son: We will serve suspension, we just did our job

This 2015, expect big changes at Be Resorts Mactan. This small but chic boutique resort in Punta Engaño plans to go on a renovation spree…