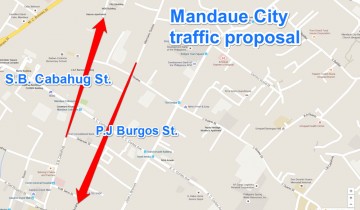 Mandaue City is considering a 60-day dry run of a traffic plan that will have some roads designated for one-way traffic in an effort to ease the gridlock in the city. A resolution authorizing the traffic experiment is being finalized and will be sponsored by Councilor Elstone Dabon, who is the chair of the committee on transportation, said Traffic Enforcement Agency of Mandaue (Team) acting chief Glenn Antigua.

Mayor Jonas Cortes has asked the Mandaue City Council to schedule a special session to discuss the resolution.

MANDAUE TRAFFIC PLAN. Mandaue traffic officials are proposing the designation of some streets in Mandaue City for one-way traffic.

TEAM is proposing to experiment with:

Antigua told Sun.Star Cebu that the proposals are meant to “lessen the volume of vehicles taking Plaridel St. to go to the north.” He said they will stop the experiment if it doesn’t ease the traffic gridlock.

“Mandaue is the gateway to Cebu; you cannot go to Cebu without passing Mandaue and you cannot leave Cebu without passing Mandaue. Kitay giagian sa tanan mao kinahanglan gyud ang coordination ug cooperation sa tanan (All vehicles pass through our city so we need coordination and the cooperation of everybody).” — Mayor Jonas Cortes, according to Sun.Star Cebu

Mayor Rama to investigate purchase of rubbing alcohol at P4,244 per bottle

Government auditors have uncovered “extravagant expenditure” with the purchase of five bottles of rubbing alcohol for P21,222.90, or at P4,244.58 for each bottle. Cebu City Mayor Michael Rama has ordered City Administrator Lucelle Mercado to look into the purchase.

Rama thanked the Commission on Audit for the finding and pledged to act on the purchase after the investigation. “We will ask them first to explain,” he told The Freeman.

Government auditors said Cebu City Hall contracts for P420 million in infrastructure projects are “legally impaired” because these lack the signature of the city accountant. The Commission on Audit said that without the accountant’s signature, “the contracts are void” and would be disallowed.

Cebu City Government officials, however, said that the accountant’s signature is no longer needed under the Local Government Code.

Cebu City Accountant Mark Rossel Salomon told Cebu Daily News that it has been City Hall’s practice for the city accountant not to sign contracts that the city treasurer has already signed.

“The purpose for the accountant to sign is to certify the availability of funds. But pursuant to RA 7160, the person mandated to certify (availability of) funds is the city treasurer. There’s no need for me to sign as witness. It’s redundant already.” — Cebu City Accountant Mark Rossel Salomon, as quoted by Cebu Daily News.

Salomon said Cebu City’s Local Finance Committee will convene this week to discuss observations by the Commission on Audit in its annual report.

“Infrastructure contracts entered into without the signature of the City Accountant as witness is legally impaired and thus, of doubtful validity.” — Commission on Audit report, as quoted by Cebu Daily News

The amount of donated blood infected with the human immuno-deficiency virus (HIV) has gone up 40% in Central Visayas in 2014, the health department reported.

Department of Health Central Visayas medical officer Dino Caing said that of the 162 blood units referred by Region 7 to the Research Institute for Tropical Medicine in Muntinlupa City for confirmation, 65 blood units tested positive for HIV.

Caing told The Freeman that HIV can remain undetected after pre-donation testing and even during the blood donation process.

Local organizers of the Asia-Pacific Economic Cooperation (Apec) conference are asking Cebu residents to help make the meetings a success by ensuring foreign delegates get the best experience during the meetings in Cebu that will start on August 22.

“The entire Cebuano community must play host. Let’s give the delegates the Cebu experience that is unforgettable and pleasant.” — Lito Maderazo, overall coordinator of Apec Cebu organizing committee, as quoted by Sun.Star Cebu

Cebu will host about 60 ministerial meetings that will be attended by more than 3,000 delegates from August to October.

“Dako ang impact kung maayo nato pagka-host ang meetings. Atong hunahunaon na kita tanan naay role para successful atong pag-host (If we host the meeting well, it can have a big impact. Each one of us has a role to play for a successful hosting of the meetings).” — Cebu Provincial Information Officer Ethel Natera, according to Sun.Star Cebu

Maderazo said organizers are coordinating closely with the Department of Public Works and Highways and the various local government units to deal with floods and heavy traffic.

» Capitol sets aside P700,000 from development fund to pay for projects in Badian, Alegria, Ginatilan, Boljoon and Ronda

» Cebu Chamber of Commerce and Industry to sign sisterhood agreements with Singapore, Vietnam

A labor group filed a petition yesterday for an across the board P145 increase in the daily wage of Central Visayas workers. The Cebu Labor…

Authorities raided five pharmacies in Cebu yesterday and seized boxes of what the National Bureau of Investigation described as counterfeit pharmaceutical products of Unilab. The…