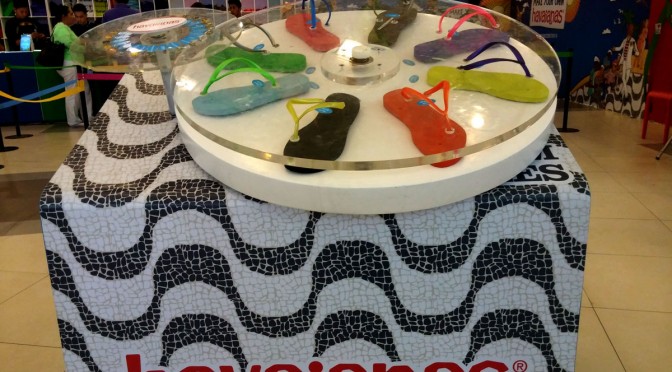 When it comes to the popular Havaianas flip-flops, the ongoing Make Your Own Havaianas (MYOH) 2014 event at Ayala Center Cebu is the highest expression of personality and creativity.

For a price just marginally higher than in the stores, Havaianas lovers get to pick the sole, strap and pin combination that is exclusively their own during the MYOH Cebu 2014 from August 1 to 3 at the Ayala Activity Center.

There are at least eight sole and strap colors and 30 pins to choose from. Available soles are Havaianas top and slim as well as a commemorative pair. The cost of a sole and strap combination ranges from P895 to P945 and P50 to P150 for the pins.

MAKE YOUR OWN HAVAIANAS. The event, which is now on its 9th year, is ongoing at the Activity Center in Ayala Center Cebu until August 3.

This is the ninth year that MYOH has been held in Cebu and fans of the flip-flop brand continue to come to create their own special pair or pairs, said A.L. Amizade Marketing, Inc. marketing director Leanne Florendo.

“The thing about Havaianas is that it’s a fun brand and the MYOH is the ultimate way for Havaianas lovers to express their personalities,” she added. Amizade is the exclusive distributor of Havaianas slippers in Central and Eastern Visayas.

WITH ENTHUSIASM. Cebuanos have greeted the yearly Make Your Own Havaianas event with enthusiasm, according to marketing director Leanne Florendo.

She added that in Cebu, the Cebuanos have greeted the yearly Make Your Own Havaianas with enthusiasm.

“It’s not surprising that we’re now on our ninth year. Even after an MYOH had just ended, many Havaianas fans would ask when our next event would be,” she cited.

CUSTOMIZE YOUR PAIR. You can customize your pair using at least eight sole and strap colors and 30 pins. Shown above is the commemorative pair.

Florendo, who said she stopped counting her Havaianas pairs a long time ago, said they were very confident in the brand when they brought it to Cebu in 2005 and they still feel that way today.

“Although it’s priced higher than other flip-flops, you get the value for your money. It provides a certain amount of comfort and durability that can’t be found in many brands,” she added.

Many Cebuanos are well aware of the upcoming 445th Founding Anniversary of Cebu on August 6, 2014 as it has been declared a special holiday…

Fuel cost for a three-hour drive from Lapu-Lapu City to Lambug Beach in Badian, Cebu and back for three vehicles carrying 16 adults and kids….