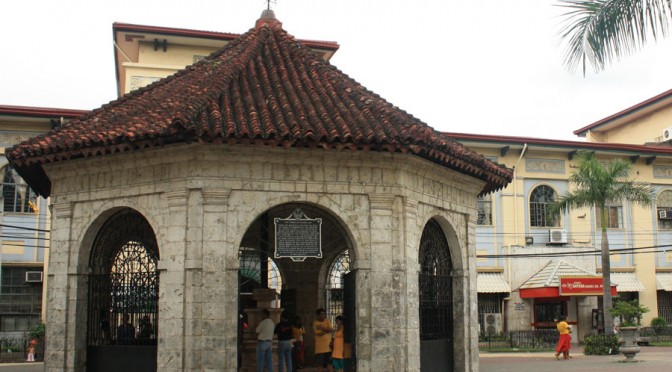 This small octagonal structure in downtown Cebu City may appear unimpressive, but it houses a valuable relic and marks an important spot for Cebuanos.

Enclosed in tindalo wood inside the octagonal kiosk is what is left of the original cross that Portuguese explorer Ferdinand Magellan planted in Sugbu (now Cebu) some 490 years ago.

The cross, or what remains of it, had to be preserved inside another wooden encasement after Catholics, believing it had miraculous powers, chipped away parts as souvenirs.

A sign below what’s now popularly known as Magellan’s Cross states it was planted on April 21, 1521 in the very spot where it stands today to celebrate the baptism of island chief Rajah Humabon, his wife, their sons and daughters, and some 800 followers into the Roman Catholic religion.

Another story on Magellan’s cross says though that is was destroyed when the Sugbuanons, who were friendly to the Spaniards when they first arrived in Cebu, turned against them after the Portuguese explorer’s defeat in Mactan. According to this narrative, island natives burned the Spanish ships and probably included the cross as well, and the one housed in the octagonal pavilion is a replica placed by the Spaniards during their colonization of the Philippines.

Magellan’s Cross is displayed in a structure located between the Basilica Minore del Sto. Niño and City Hall in Magallanes (Spanish translation of Magellan’s name) Street. It is open even on weekends and holidays, and there is no entry charge. A mural showing the first mass and the conversion of Sugbuanons to Christianity has been painted on the ceiling of the pavilion.

A notice outside the structure says the site was improved in 1735 by Rev. Juan Albarran, prior of San Agustin, and by Rt. Rev. Santos Gomez Marañon, bishop of Cebu, in 1834.

Cebu City Hall now uses the cross as a symbol and the chapel’s image can be found in the city seal. Many other Cebu-based government and non-government organizations use Magellan’s Cross in their seals and logos.

The cross is a popular tourist attraction together with other Cebu historical landmarks like the Fort San Pedro, built by the Spanish conquistador who came some 40 years after Magellan, and the Basilica Minore del Sto. Niño, considered the oldest church in the Philippines.

The easiest way to go to the area is to take a taxi, all drivers know where it is. If you’re from the uptown area, the taxi ride may cost you around P80. If you’re coming from Lapu-Lapu City in Mactan Island, the taxi fare may be around P200.

If you feel adventurous and you want to tour Cebu City via public transport, you can take one of the many jeepneys with routes passing near the area. Just check the jeepney’s signboard, usually on the windshield, and pick one that says City Hall or Basilica (for the Basilica Minore del Sto. Niño, which is right next to Magellan’s Cross).

One of Cebu’s most anticipated events, the Sinulog Festival, is drawing close and there is a certain buzz in the island in anticipation of two… 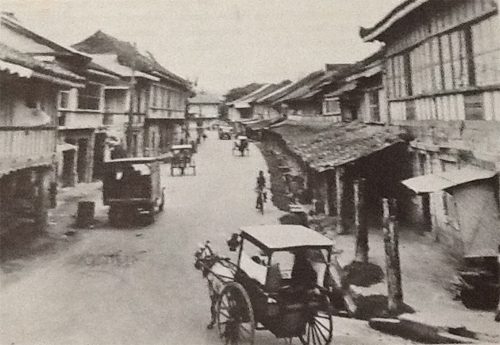 It may look like any ordinary street but this crowded stretch overflowing with shops, stalls, sidewalk vendors, people, and passenger jeepneys is, believe it or…

1 Comment on Colon, oldest street in the country
facebookinstagram