M. Butterfly to be staged in Cebu City from March 14-17 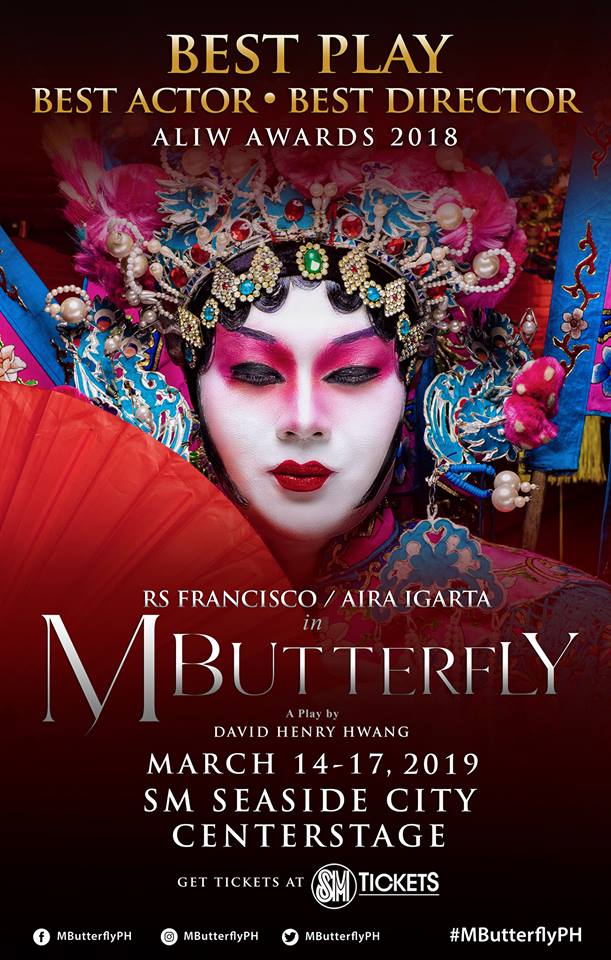 World-class masterpiece M. Butterfly will be staged in SM Seaside Centerstage from March 14-17. The theater event of the year is presented by Tony and Grammy award winning producer Jhett Tolentino and FRONTROW Entertainment, the producer of highly-acclaimed independent films Bhoy Intsik and Bwaya.

The schedule of performances of M. Butterfly in Cebu City are as follows:

Tickets are available in any SM mall or via SMTickets.com.

Producers decided to stage a national tour for M. Butterfly to bring the world-class masterpiece to those who did not have the opportunity to catch its 2018 Manila run. Before Cebu City, it was staged in Iloilo City and Dumaguete City.

Theater companies are rarely able to bring successful productions in Manila to other parts of the country of many challenges. Organizers said Jhett Tolentino and FRONTROW Entertainment are taking this bold step “to carry on their mission and advocacy in the performing arts and to further enhance audience development throughout the Philippine archipelago.”

This revival production of David Henry Hwang’s M. Butterfly is the winner of the 2018 Aliw Awards for Best Play, Best Actor and Best Director and got nominations for The Best Featured Actress in a Play.

The play tells the story of René Gallimard, a member of the French embassy in China. He meets and falls in love with Chinese opera star Song Liling, a woman whom he considers to be the embodiment of the perfect woman, Madame Butterfly.

Targeting audiences from ages 18 and older, the producers are hoping that this classic drama, inspired by Giaccomo Puccini’s opera ‘Madame Butterfly’, will likewise resonate to theater audiences from Luzon, Vizayas and Mindanao that “love, power and deception hold no boundaries.” 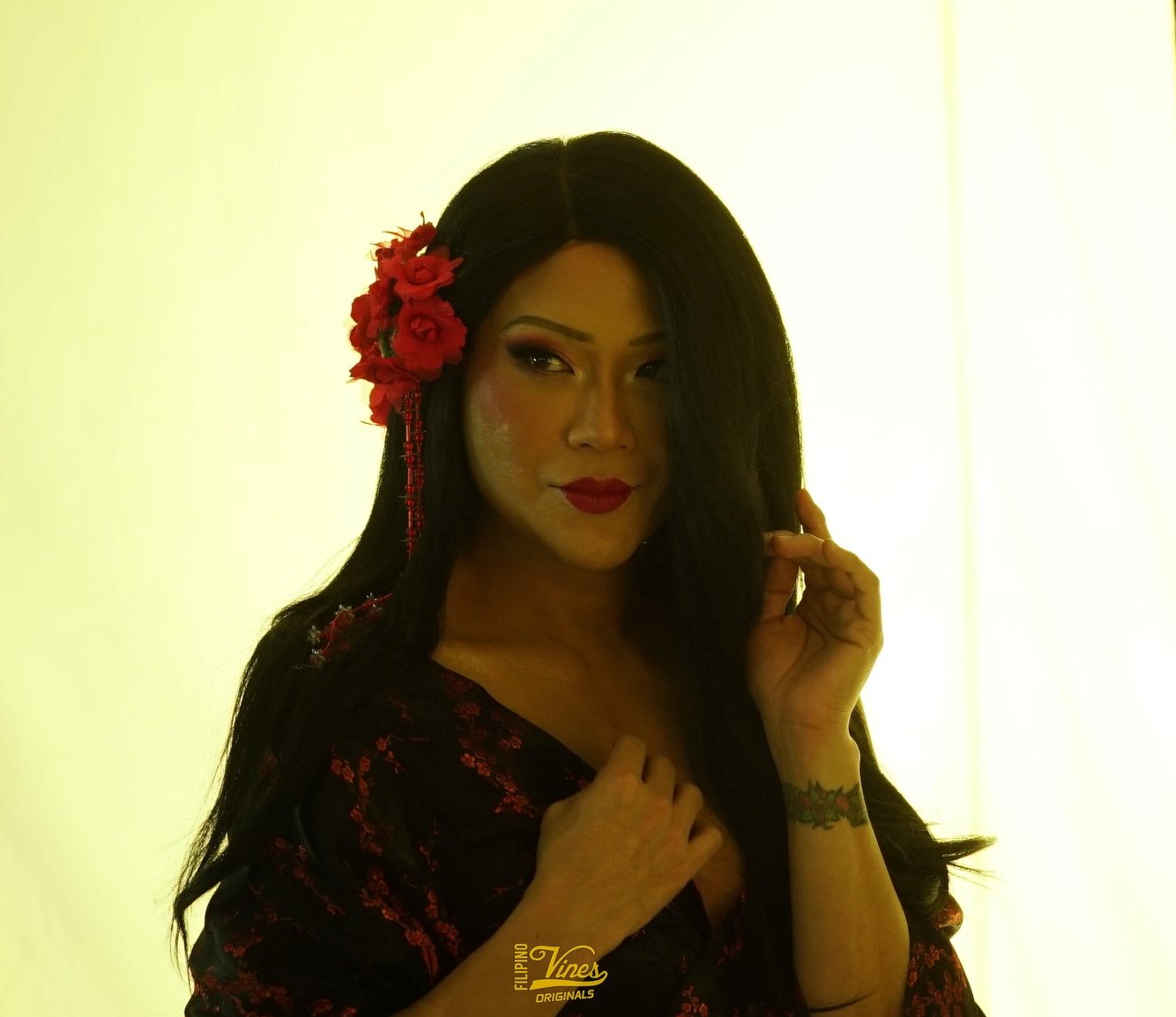 RS FRANCISCO, the 2018 Aliw Award Best Actor for M. Butterfly will reprise his iconic portrayal of Song Liling, the Chinese opera singer who is Gallimard’s object of affection and seduces him through his biases of the East then exploits their intimacy to collect classified information for agents of the Chinese Communist Party.

RS first essayed this role in May 1990 for Dulaang UP, opposite veteran actor, writer and critic Behn Cervantes. On its debut, M. Butterfly immediately rose to critical acclaim with packed houses and box office success in over 100 performances throughout the Philippines.

In the many years thereafter, RS Francisco’s theater credits in numerous productions and variety of roles continued to hone his craft as a complete artist. In films, his most awards include the SINAG MAYNILA Best Actor, the STAR AWARDS Movie Actor of the Year and the SUBIC BAY INTERNATIONAL FILM FESTIVAL Best Actor.

When M. BUTTERFLY was revived recently on Broadway, RS had thought of bringing it to life once again to the new theater audiences of today. After all, this is the only ‘one’ role that continues to remain as closest to his heart. 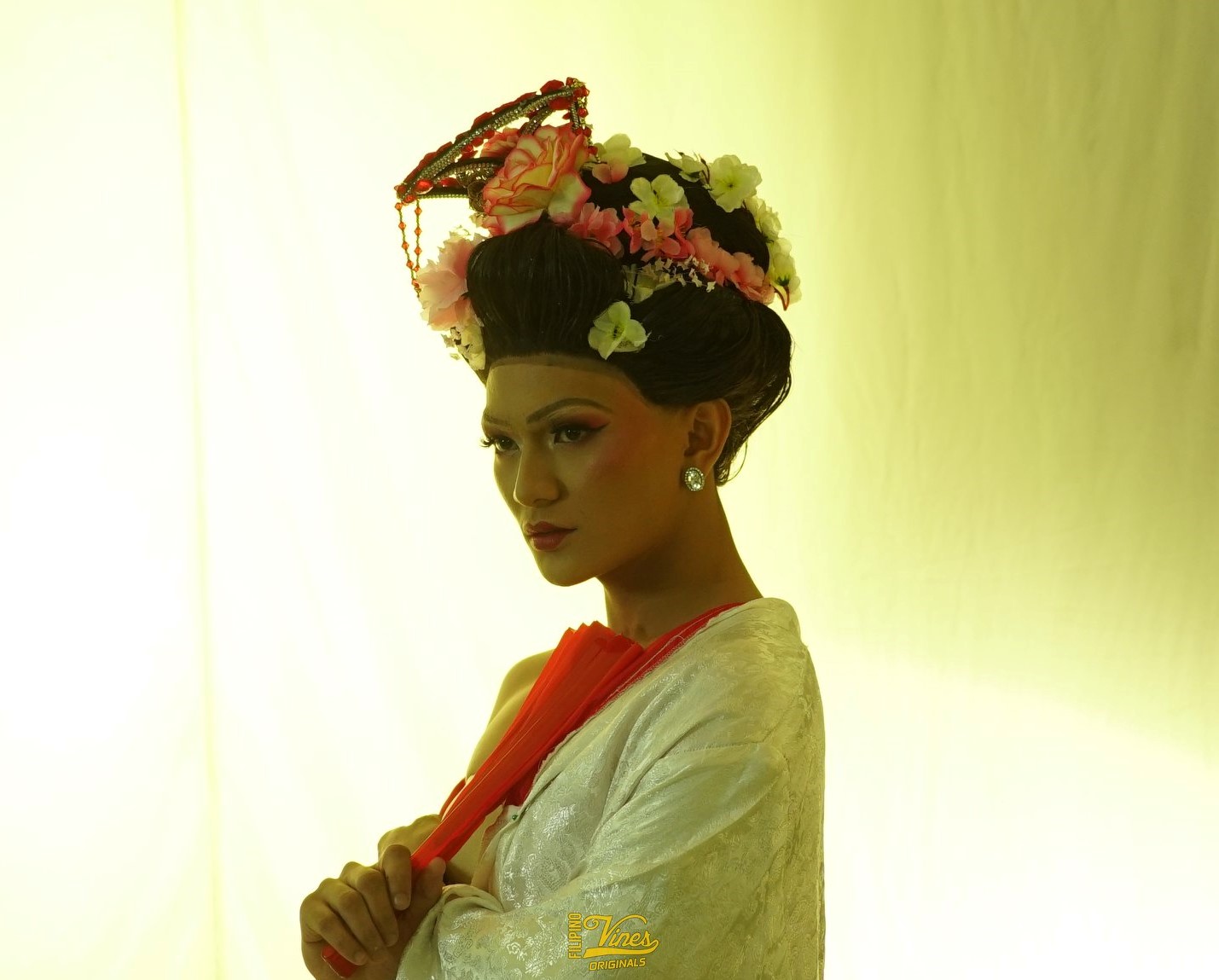 To add a diverse twist to the M. Butterfly National Tour 2019, young actor AIRA IGARTA will step into the role of Song Liling as alternate in certain performances. As an original member of the Kurogo ensemble of the play’s 2018 Manila run, Aira is a stage and film actor from the Theatre Arts Program of UP Diliman where he took part in several Dulaang UP and Dulaang Labortoryo productions. Trained by the likes of Tony Fabella and Luther Perez, Aira was originally a dance and voice scholar at Quezon City Performing Arts Foundation (QCPADFI). French actor OLIVIER BORTEN will essay the role of Rene Gallimard, a former French diplomat, who relates the story of his passionate, disastrous affair with Song Liling from his cell in a Paris prison, where he is serving a long sentence for treason.

Philippine theater royalty JENINE DESIDERIO, who among many other theater, film, television and recording credits, assumed the lead role as Kim in the West End’s original Miss Saigon, will portray Gallimard’s wife – Helga. The pair married as a matter of convenience; Helga’s father had diplomatic connections that helped Gallimard ascend in his career.

After 25 years of stage acting experience in the United Kingdom, Scottish NORM MCLEOD has stepped into the Philippine stage as Manuel Toulon, the French Ambassador to China who also happens to be the dominant and strong-willed superior of Gallimard at the embassy in Beijing. Toulon promotes Gallimard to vice-consul and charges him with collecting information to aid the American war in Vietnam. 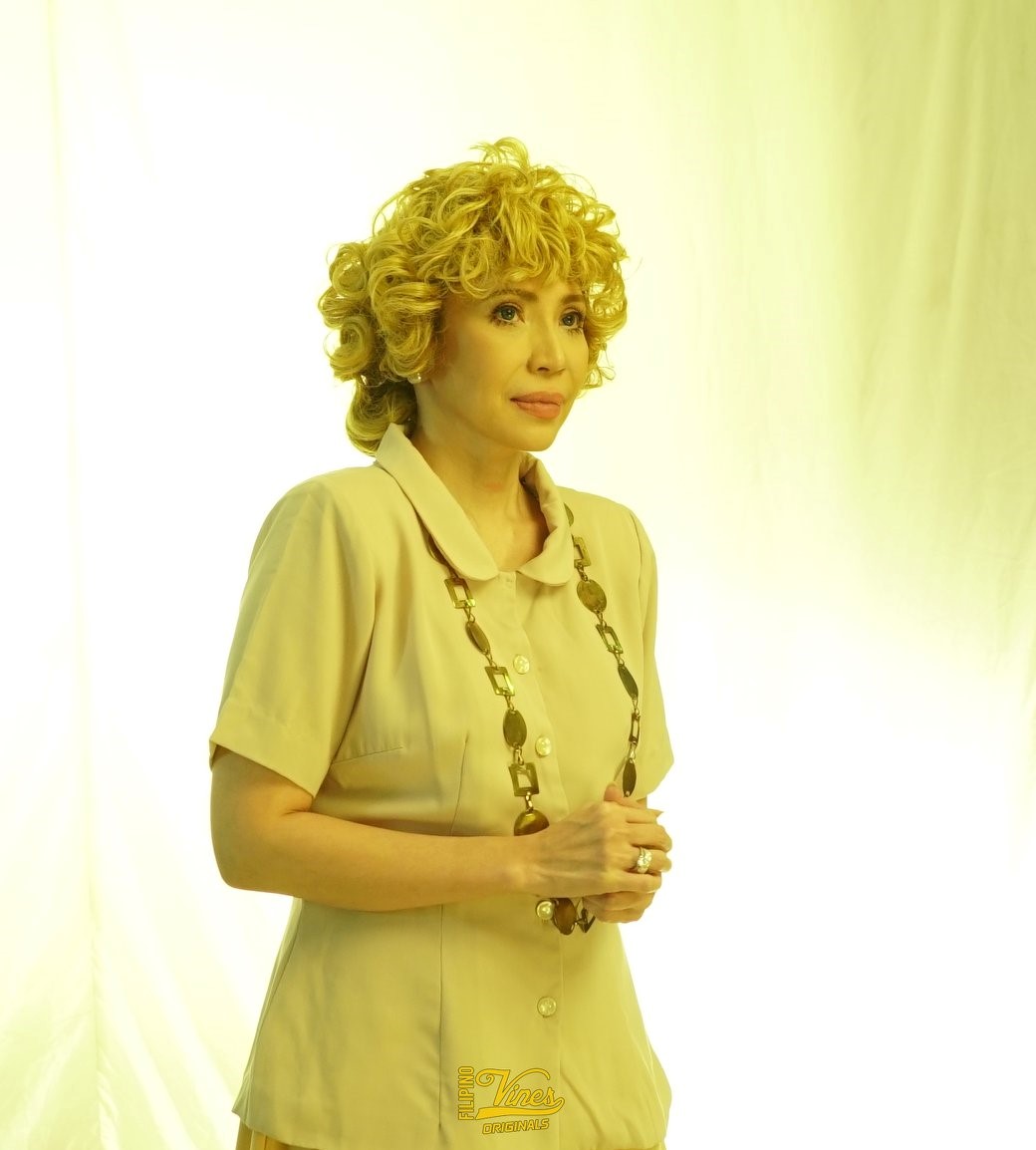 Trilingual American actor LEE O’BRIAN will once more personify Marc, the sexually unapologetic best friend of Gallimard. He encourages Gallimard to take sexual advantage of the women around him without regard for their feelings or even their consent. Although M. Butterfly was Lee’s first theatrical endeavor, his acting skills have already been tried and tested in international films “Edsa Woolworth” and “Forgive Me Father”. O’Brian also portrays Sharpless in M. Butterfly for a brief time.

Portraying the different roles of Suzuki, Comrade Chin and Shu Fang is powerful and well-rounded artist MAYEN ESTAÑERO. Her impressive performance in the 2018 run of M. Butterfly landed her an Aliw Awards nomination for Best Featured Actress. Mayen’s previous theater credits include Dalanghita Production’s Corazon Negro, An Operetta as Maestra, Virgin Labfest’s Mula sa Kulimliman as Leila and Sugid Production’s Buwan at Baril as Asawa. Comrade Chin is a member of the Red Guards, a paramilitary arm of the Communist Party in China. Song communicates with Comrade Chin often, to pass on the classified information he gathers from Gallimard. 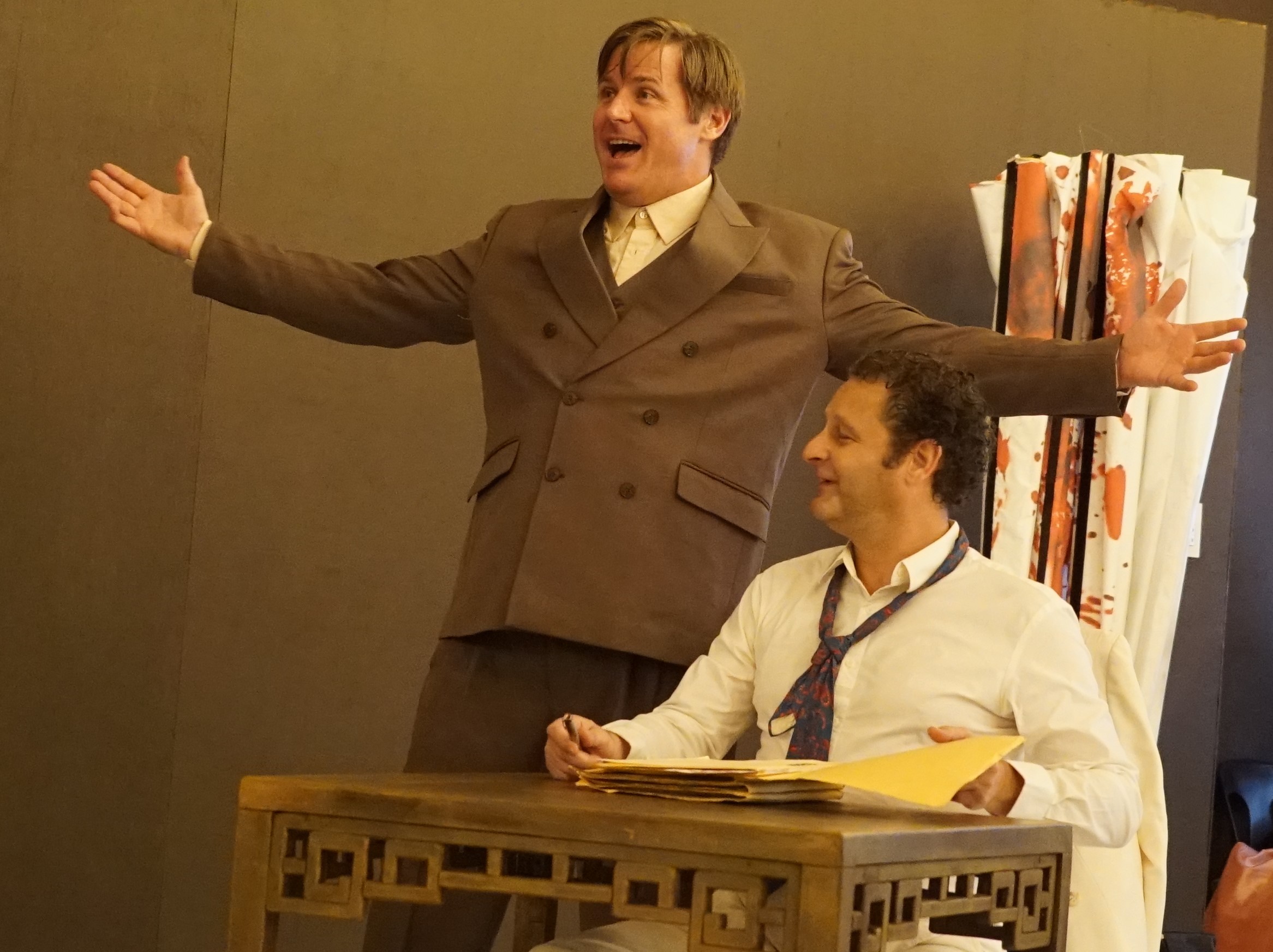 Twice a finalist as Best Actress for the Aliw Awards, MAYA ENCILA receives her third nomination as Best Featured Actress for her unique characterization of Renee and Pin-Up Girl in M. Butterfly. The stunning Arizona native plays a young, sexually liberated Danish woman with whom Gallimard has an affair. Renee’s boldness presents a stark contrast to Song’s modesty, which Gallimard finds both exciting and obnoxious. A true expert in performing arts, Maya has taken the stage countless times as Mary Lennox for The Secret Garden, as Belle for Repertory Philippines’ Beauty and the Beast musical and as Lara for Philippine Stagers’ KATIPS, to name a few.

Rising soprano star JASMIN SALVO will be the new Opera Singer for the national tour.

The members of the ensemble playing the role of Kurogo are as follows: PHEITH IENA BALLUG, ULLYSES BASA, SASA CABALQUINTO, FRANCO FERRER and JOHN PAUL ORTENERO.

Check out M. Butterfly at the following social media accounts: 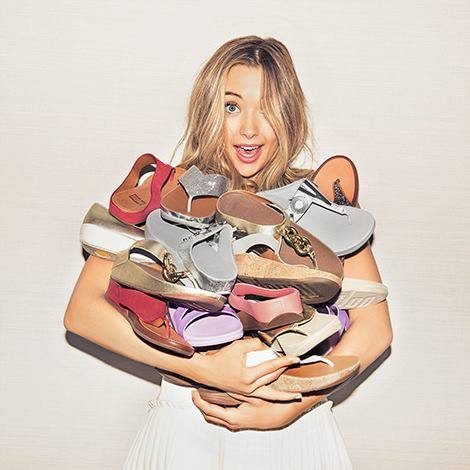 Fitflop on sale up to 60% this weekend

With summer fast approaching, make sure you have comfortable footwear in time for your travels or daily commute by stocking up on Fitflop. Primer Group…