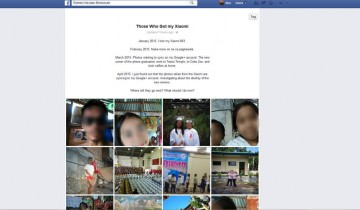 Romeo Bonsocan was riding a jeepney plying the 04L or Lahug-SM City Cebu route last December 30 when he lost his office phone, a Xiaomi Mi 3.

Bonsocan, who works for the Creative Republiq advertising agency, isn’t sure whether he dropped the phone or it was swiped from him.

The Xiaomi Mi 3 isn’t particularly expensive – it sells for P10,599 on the Lazada website but only there. But it is a powerful Android phone for its price. It is also a hard phone to buy — Xiaomi doesn’t have a physical store and only sells through Lazada in the Philippines.

The Mi 3, as is often the case, is currently out of stock. Several time in the past, the site announced it was selling the Mi 3 and each “flash sale” I couldn’t order in time to get one of the few available units.

“The next day, morning, nag-atang ko sa tanang jeep hoping makit-an just in case natagak pero wala man jud. It took me 2 hours to check and nibalik tanan jeep. Or most probably naay nakakuha adto then gibaligya? Can’t be sure,” Bonsocan told MyCebu.ph in an interview. (I checked on all jeepneys plying the route the next day. It took me 2 hours to check all jeepneys and I couldn’t find it. Maybe somebody got it and sold the unit?)

He called the phone and at first it rang and nobody answered. About 2 days after he lost it, somebody answered but cut off the call.

Bonsocan said he wasn’t asked to pay for the device by the office. He said that by February, he had “moved on” from the loss.

MISSING PHONE. These people have Romeo Bonsocan’s Xiaomi Mi 3, which he lost inside a jeepney last December 30.

The phone, however, was tethered to Bonsocan’s Gmail account. In March, it started to send photos of the people who were now using the device to his Gmail account, although he did not know about it that time.

Yesterday, he realized that somebody was using his Mi 3 because he got a notification in Gmail about a new Google Story. If you link your Android device with Google+, it uploads all the photos you take with the device and then organizes it into a digital scrapbook called Google Story.

And what a Google Story it was for Bonsocan – with the phone showing photos of a family, a young kid, a graduation, a trip to the city zoo and the Taoist Temple and selfies taken at home.

He posted the photos on Facebook to ask for help in identifying the people there. They haven’t been identified as of this writing at 8:30 p.m. on April 20.

Bonsocan said he will go to the National Telecommunications Commission on Wednesday to have the device blocked.

He said the people in the photo might just have bought the device from somebody else. Bonsocan said he just wants the phone returned and the truth on what really happened to come out.

The water district announced yesterday that there is low supply in some areas in Cebu City and Talisay city. But an official said this wasn’t…