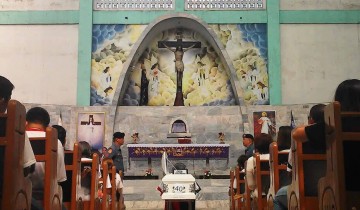 Two Cebuanos of the 44 Philippine National Police-Special Action Force (SAF) policemen were laid to rest yesterday, Feb. 8, 2015, in Cebu. Meanwhile, cops and civilians shave their head to show sympathy for the relatives of SAF commandos.

“He was my greatest teacher before he became a hero for everybody. He is my personal hero.” — Dr. Cristine Cempron, wife of PO2 Romeo Cempron

“Today, as we bid farewell to one of our fallen comrades, we honor their commitment, their service and their dedication.” — Senior Superintendent Prudencio Tom Bañas, chief of the Police Regional Office (PRO) – Central Visayas

More than 20 policemen, civilians and leaders, including former partylist Rep. Pastor “Jun” Alcover Jr., shaved their heads at the Plaza Independencia to show sympathy for the relatives of the 44 SAF cops killed in action during a mission to serve a warrant of arrest on two international terrorists in Mamasapano, Maguindanao.

PO2 Christopher Lalan, a survivor of the January 25 encounter in Mamasapano, Maguindanao that killed 44 troopers, will lead the 26 resource persons invited to appear in a Senate inquiry into the bloody incident today, February 9.

HONORING THE FALLEN. Family, friends and colleagues pay tribute to PO2 Windel Candano, one of the SAF commandos slain in the Maguindanao clash. (Photo by the Cebu Provincial Government)

A study team from the Japan International Cooperation Agency (JICA) found that the cities of Lapu-Lapu, Danao and Carcar are good areas for future development given that they have wide areas that are not at risk of floods or landslides.

Smaller available areas for development are available in Liloan, which has 837 hectares; San Fernando, with 832 hectares; and Naga City, with 782 hectares.

Of the 13 local government units studied in Metro Cebu, 76 percent of the area was found not suitable for urban development.

The study team said they found 11,948 hectares or about 10.9 percent of the total area to be “development-suitable” while 72 percent of the study’s territory was in a “slope hazard area”. The government has received reports of colorum vehicles operating along the SRP route from Senior Citizens Park to Kasadya sa SRP to Talisay City. They…

FIRST-time property investor Alfredo Uy has proven that his money can work for him instead of him working for the money. He invested in the…