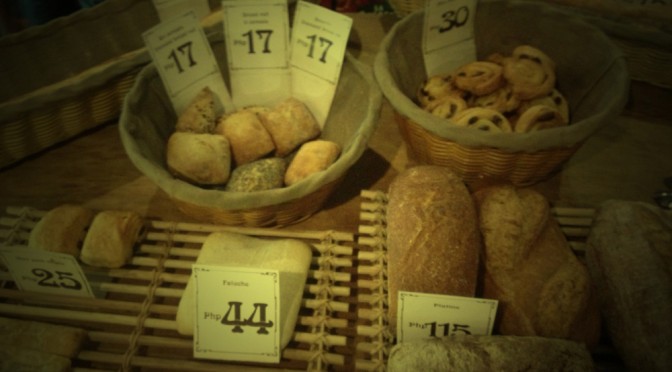 Our visit to La Vie Parisienne was quick and unplanned but checked out we did this new Cebu French bakery, deli, and wine library.

La Vie Parisienne, which translates to Parisian Life, sits along the right side of Gorordo Avenue if you’re going towards JY Square and near where the temple of the Church of Latter-Day Saints (LDS) is in Barangay Lahug, Cebu City.

It’s within the same compound as the La Maison Rose restaurant.

We arrived just when the croissants were almost done so we had some of those and they were the best we’ve tasted.

Aside from croissants, other baked goodies on display at the new Cebu French bakery La Vie Parisienne include bread like faluche, platine, and baguette.

They were flaky on the outside and melt-in-your mouth soft on the inside. I don’t like bread in general but I devoured two of those croissants that this Cebu French bakery sells for 25 pesos each.

Croissants fresh from the oven at La Vie Parisienne along Gorordo Avenue in Lahug, Cebu City.

A glass display of different kinds of French and other cheese, among them bleu d’auvergene, gouda, bre lafontane, rondin great, comte badoz.

At the left side of the door is an oven where you can watch the staff cook the bread. It was croissants when we were there. Other baked goodies on display include bread like faluche, platine, and baguette as well as macaroons.

There was a glass display filled with different kinds of French and other cheese, among them bleu d’auvergene, gouda, bre lafontane, rondin great, comte badoz, that sell from P100 to P200 per 100 grams.

Shelves of fruit preserves and spreads adorn a side of the wall. There is a small enclosure within La Vie Parisienne – about a fourth of the store’s area – that is chilled and filled to the rafters literally with wine.

I guess it’s an easy enough assumption to make that this is the wine library. I wanted to check out the bottles but we were pressed for time.

What I couldn’t miss are wines under the Michel Lhuillier label. That’s not surprising, of course, since the Lhuillier family owns the place. This is according to the store staff I talked to who also told us that La Vie Parisienne just opened on the fourth of this month, May.

The space is a bit small so it gets really cramped when there are 10 or more people inside.

However, the back door opens to a spacious garden where tables have been set up but they were already filled up when we were there.

Around 400 foreign tourists in a cruise ship that stopped by Kalanggaman Island in Palompon, Leyte were so blown away they stayed for 12 hours….

Sand is not the most comfortable of beds but our weekend camp-out on White Beach or Basdako in Moalboal, Cebu had its benefits. It was…

5 Comments on Camping out on Basdako beach in Moalboal