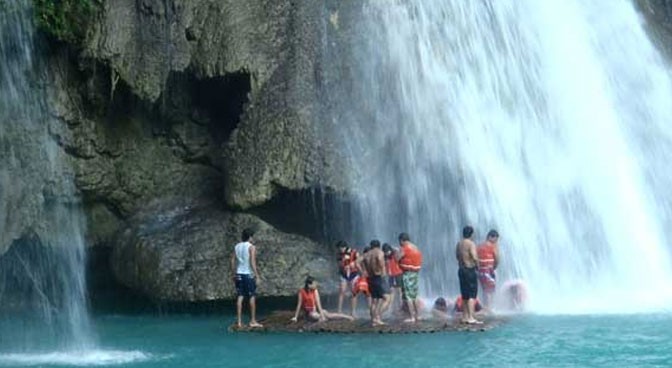 Cool and refreshing is how best to describe the emerald water of the Matutinao River that forms what is commonly known as Kawasan Falls as it follows its meandering course to the sea.

The river creates no less than eight waterfalls of varying heights but it is only in five that bathing is possible.

Kawasan Falls in the village of Matutinao in the Cebu town of Badian, a three-hour bus ride from Cebu City, are popular with locals and tourists.

Visitors ride on a raft to underneath one of Kawasan’s waterfalls for a different kind of shower experience.

They don’t mind the long walk along a rocky and uneven trail to the falls, the first one of which is 1.5 kilometers away from the main highway where the buses make their stop.

The first waterfall travelers come across from the road is the biggest and tallest and also the most popular. Visitors usually stop here to enjoy a dip in the clean water or just enjoy the sight and sound of the falling sheet of liquid from the open cottages built along the riverside.

More adventurous tourists take a ride on a raft to under the waterfall for a shower under the gushing water. Ten people can fit in the raft and need to pay only P300 plus another P50 each for the life vests they are required to wear.

Jumping from any of the falls has been prohibited starting in 2008 when a tourist was killed and a few others injured when a jumper landed on the raft they were on.

Visitors who intend to go up to the other waterfalls will have to climb steep steps carved on the mountainside and continue on a narrow trail that goes up or down in some areas and across dry riverbeds or makeshift bamboo bridges in others.

Dense vegetation grows by the side of the trail. The further upriver one goes, the fewer people and the more private the scene. At least two smaller waterfalls form a pool of shallow water that is safer for children.

The farthest waterfall is what locals call “the source.” Willie Lastimoso, who lives close, said beyond the source is the beginnings of the Matutinao River. The view is spectacular upriver but tourists will need a local to bring them there.

Lastimoso said he has been renting out huts at the source since 1989. Back then, overnight stay near this topmost waterfall is possible at the wooden house owned by a German national but the structure had long been demolished.

It is a 2.3-kilometer walk to the topmost waterfall and the sight of the short and narrow gushing water that is the source could turn off visitors. Tourists who brave the slippery and difficult path to reach it though can take the comfort in the fact that water is cleanest there.

Rooms are available for overnight stays at areas near three waterfalls. Regular rooms for two range from P900 to P2,500 while bigger rooms that can fit five to 10 people cost P3,500.

Open cottages are also available for day use at only P300.

The Kawasan Nature Park Multi-Purpose Cooperative also has accommodations nearby. Call 032-5161781 or 0926-4057141 for bookings or reservations.

Rooms are also available at the waterfalls farther upriver at more or less the same rates.

A concerted effort by the immediate community and the local government of Badian has ensured a Kawasan free of trash and pollution. They were also able to preserve the river’s forest cover and dense vegetation.

Sore thumbs that stick out during my visit are people doing laundry in shallow parts and the concrete structures built near the falls.

A swim in the cool water or a shower under the falls is worth every second of the tedious three-hour journey to Badian.

Buses at the Cebu South Bus Terminal along N. Bacalso Avenue in Cebu City leave hourly for the town. The terminal is 20 minutes by cab from the uptown area, and drivers pass on to passengers the entry fee of P10.

Each terminal user is also charged a P5 fee.

At the terminal, ask for the Ceres bus to Badian. It is bigger and seats more comfortably than the other buses.

Tell the bus helpers to drop you at the church in Kawasan near the walkway to the waterfalls. The Badian town center is a good eight kilometres from Kawasan and you shouldn’t stop there.

Cement, iron, and steel come together to form the towering Heritage of Cebu Monument built right on the original Plaza Parian in Cebu City. Conceptualized…