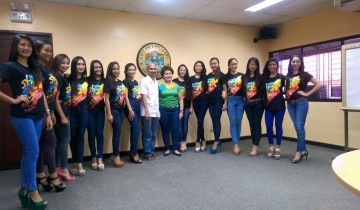 There’s another reason to be merry with the ongoing Kadaugan Street Party in Lapu-Lapu City. With the suspension of the ordinance against drunk behavior in public areas, revelers can drink beer this weekend without fear of getting arrested.

The current scorching heat caused by summer and the El Niño is already taking a toll on some of Cebu’s livestock and water supply. Yet the state weather bureau is warning the Cebuanos of a possible rise in temperature to 37 degrees Celsius in May.

The suspension of the ordinance against drunk behaviour in public places was done to let locals and tourist celebrate the victory of Datu Lapu-Lapu over conquistador Ferdinand Magellan. However, drunks who cause trouble will still be apprehended.

The search for Reyna Bulakna 2015 is one of the events leading up to the reenactment of the battle between Datu Lapu-Lapu and Portuguese explorer Ferdinand Magellan called Kadaugan sa Mactan. Photo shows Reyna Bulakna 2015 bets with Mayor Paz C. Radaza. (Photo taken from Mactan Post)

“We will tolerate those who will fall asleep on the sidewalk or vomit, but we will enforce the ordinance against those who cause scandal or become security threat.” –Lapu-Lapu City Police Office Chief Armando Radoc

These are some things you need to remember when you go celebrate in the Kadaugan Street Party:

* It started Thursday and ends tomorrow night.
* Some major roads in Lapu-Lapu are closed to vehicles this weekend.
* Drivers are advised to follow traffic directions.
* Organizers have set up stalls and banners along the three-kilometer venue for the street party that starts at the foot of the Marcelo Fernan Bridge to the Hoops Dome.
* Other activities you can find in the Party include an indoor sports clinic, basketball contests, wake boarding, a Kadaugan Color Beer Run, Fitness Dance Marathon, Zumba, sound and lights competition, a Cosplay competition, a parade of electric floats and higantes, and a car and motorcycle show.

The annual re-enactment of the April 27, 1521 battle will be staged on Monday morning.

Effects of the sweltering heat seen

The following are believed to be caused by the high temperature Cebu is experiencing:

There is low water supply in some areas as streams, rivers, groundwater reservoirs and other tributaries dry up.

In Medellin, the death of two goats that had no prior signs of sickness is suspected to be caused by the heat.

“May has been considered as the hottest month and the rest of the months are below normal ang rainfall, mao na nga dako gyud ang problema sa tubig.” – PAGASA Visayas Director Oscar Tabada

The city disaster council recommended for the declaration of a state of calamity to utilize the city’s disaster funds to help areas cope with the temperature that will possibly rise.

Since the Pope already recently visited the Philippines, he is less likely to visit Cebu next year for the International Eucharistic Congress (IEC), according to…

To solve the worsening traffic in Cebu City, there are plans to build a P750-million underground pass on N. Bacalso Ave. It will be a…