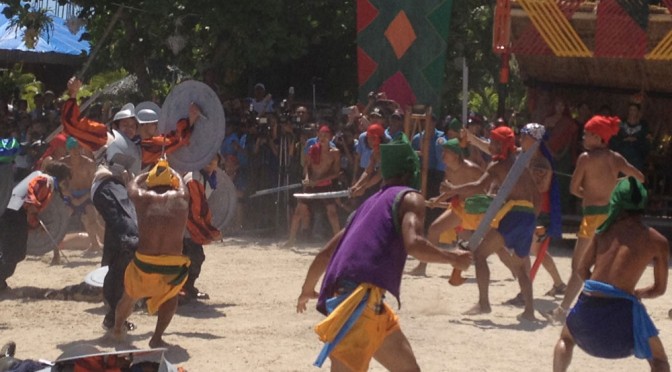 We arrived as the fight raged on. Although it was only a reenactment of the Battle of Mactan, it combined just the right amount of history and flair to make it enjoyable.

When we got there, soldiers dressed in Spanish armor were making their way to shore in boatloads. Others had reached land and clashed with village men under the leadership of Mactan chieftain Lapu-Lapu.

While women and children ran around in a frenzy, loud blasts rent the air. Makeshift huts built in the shallows caught fire.

I don’t know if it was because of a lack of expectation on my part or that special pass that allowed me a front seat view of the action, but I found myself quite impressed.

A lot of preparation and forethought had obviously gone into the reenactment of that battle between Spanish forces led by Portuguese explorer Ferdinand Magellan and native chieftain Lapu-Lapu and his band of village warriors on April 27, 1521.

The Battle of Mactan reenactment happened on the coast of Barangay Mactan, which is now a park named Liberty Shrine in memory of the event that transpired there 492 years ago.

For purposes of this year’s commemoration of what Opon residents call the Kadaugan sa Mactan (Victory in Mactan), the beach was transformed into a scene straight out of a movie set. It had its share of actors, most of them native Oponganons. A few others though were popular celebrities: Lapu-Lapu was played by Polo Ravales, Reyna Bulakna by Yam Concepcion, and Magellan by Troy Montero.

I used to wonder why they go to all that trouble of flying in celebrities to portray the leading roles but I realize it’s part of the event’s draw.

At that time on the battlefield when Lapu-Lapu clashed with Magellan, the spectators were screaming their support, egging on Polo Ravales to finish off Troy Montero. Even the children got in on the act. They certainly know their celebrities.

If there’s one thing this reenactment has achieved successfully, it is that this part of history – where untrained island natives represented by Lapu-Lapu repelled a much superior invading force – will continue to live on.

Village warriors of what was then Maktan meet Spanish soldiers in the shallows on April 27, 1521, reenacted here by local actors.

During a press conference shortly after the Battle of Mactan reenactment, the actor who played Lapu-Lapu, Polo Ravales, said the important lesson here is if you want something badly enough, you must fight for it.

Troy Montero, on the other hand, said it is important that we know ofour past and reliving history through events like the Kadaugan sa Mactan or historical movies help us remember.

This year’s Kadaugan sa Mactan is the 13th edition of the celebration. And it does not stop with the reenactment. The whole thing is a week-long event that features food, music, street parties, and a whole lot of fun.

Lapu-Lapu City Mayor Paz C. Radaza said they are finding ways to make the celebration better every year. Crowd control, I think, could do with some improvements.

Here with the actors who played Lapu-Lapu (Polo Ravales), and his lady love, Reyna Bulakna (Yam Concepcion). Photo on the left is courtesy of Maria Armie Sheila Garde.

In this year’s Kadaugan sa Mactan battle, several people had come down from the bleachers and crowded around on that small stretch of beach where the event that led to Magellan’s death was being played out.

Nevertheless, since my first experience of the Kadaugan sa Mactan came with 13 years worth of lessons, the Battle of Mactan reenactment could only get better in 2014.

If you’ve ever been caught in a cloudburst, when huge drops of rain suddenly fall on you, multiply that feeling a thousand times and you…