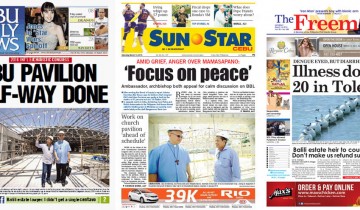 Church officials said the construction of the pavilion for the 51st International Eucharistic Congress (IEC) that will be held in Cebu City next year is “halfway done” and that the construction work is “ahead of schedule.”

Meanwhile, traffic improved significantly in the North Reclamation Area (NRA) when Logarta Street was opened to two-way traffic between 5 p.m. and 7 p.m.

The P550-million Eucharistic Pavilion will be used for the gathering of the religious during the 51st IEC in January 2016.

But once the gathering is over, the facility will be used as a pastoral center and a new minor seminary for the Archdiocese of Cebu. It would also serve as the “biggest evacuation center” in Cebu.

“I was a bit anxious in the past but when I saw the development in the Pavilion, I’m now very excited about the forthcoming event. From all angles, people know that we are prepared.” — Cebu Archbishop Jose Palma

“Cebu is making a miracle, beyond human effort.” — Archbishop Piero Marini, president of the IEC (words were echoed by Palma)

Under a memorandum of agreement, contractor Duros Development Construction fully shouldered the cost of building the pavilion in exchange for usufruct rights over part of the seminary property for 25 years.

The Eucharistic Pavilion is now 50.8 percent complete. The estimated completion date is in September this year.

Citom served seven warrants yesterday to drivers who have unsettled traffic violations. It will serve more warrants, which were issued by Municipal Trial Court in Cities Branch 7 Judge Francisco Seville Jr., next week.

It has 307 bench warrants for private and public vehicle drivers.

“We prioritized the serving of bench warrants to private vehicle owners to show that they are not exempted.” — Cebu City Traffic Operations Management (Citom) operations chief Jonathan Tumulak

Meanwhile, at least eight erring taxi drivers were reported to the Land Transportation Franchising and Regulatory Board-7 for refusing to comply with the provisional taxi fare decrease.

Citom noted that that traffic improved in the NRA when Logarta St. was opened to two-way traffic between 5 p.m. and 7 p.m.

The new adjustment is the third one implemented by Citom for the NRA. Implemented starting last Thursday, it coincides with the truck ban, giving opportunity for more light vehicles to pass the NRA.

However, jeepney passengers are confused with the several changes made in the rerouting plans since March 5 when traffic in the North Reclamation Area was disrupted by rehabilitation work on the S. Osmeña Road.

The Freeman: Bankers appeal for BSP to accept damaged notes

Five persons were killed in another car accident at the South Road Properties (SRP) shortly before dawn on Sunday. The car they were in crossed…

Cebu News Digest: March 13, 2015: 60-year-old tanod in Carcar dies after trying to break up catfight; Taxi driver to LTFRB: I did not threaten couple with knife

A 60-year-old barangay tanod in Carcar City died when he tried to break up a fight between two women. Cesar Pantonial was kicked in the…