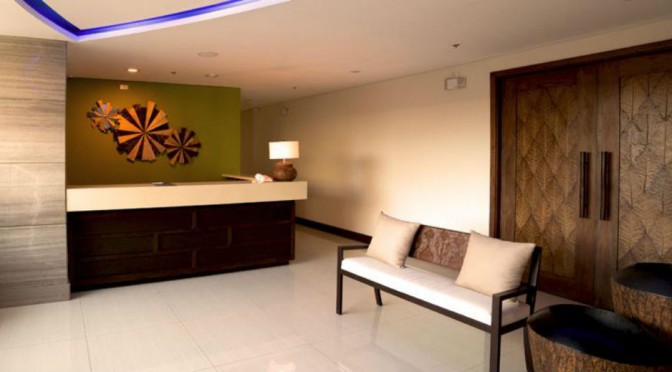 This early, many Cebu City hotels are already fully booked for the important Sinulog 2015 dates of January 17 and 18.

These dates are the third Saturday and Sunday in January when Cebu celebrates the eve and actual day of the Feast of the Señor Sto. Niño.

Since many Cebu hotels and pension houses are already full, you might be one of those still looking for a place to stay when Cebuanos celebrate the festival of festivals known as the Sinulog.

Opened just this June, Azia Suites and Residences still has available accommodations for Sinulog 2015 revelers. One great thing about Azia, which means “sunshine” in Greek, is its location near Gen. Maxilom Avenue (formerly Mango Avenue), along the route of the Sinulog 2015 dancing contingents.

About half of the 60 rooms at Azia Suites are still open on the Sinulog Festival weekend, said outgoing manager for hotel operations Ian V. Fresnido. All of the hotel’s four family suites are taken, however, and what remains are standard rooms with double or twin single beds.

Fresnido said the hotel’s location at 8 Rahmann Extension, just beside what used to be the USC Boys’ High School, gives it easy access to Cebu City’s business, shopping, and entertainment centers. Getting a ride on a taxi or jeepney is not a problem as Azia Suites is of walking distance from Gorordo and Gen. Maxilom avenues.

The 9-storey hotel has two function rooms that can cater to an event requiring from 30 to a hundred seats.

Only one of Azia’s two restaurants, Cafe Lazat, is currently open. Fresnido said they plan to open the second one, Platela Grill, by January. The hotel also plans to open by the Sinulog season the Raya Bar, where guests can have coffee or drinks, on the topmost floor.

The top floor lounge will be a vantage point for the fireworks displays during the Sinulog Festival as well as cityscape views.