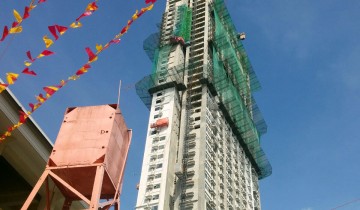 Taft Properties, the developer of what is now the tallest Cebu condominium, celebrated a construction milestone when it held a topping off ceremony for the first tower of the two-building development last January 13, 2015.

In construction language, topping off means the placing of the final beam on a building project.

“This day is an important milestone for Horizons 101 and Taft, as we mark the realization of Taft’s commitment to deliver the tallest tower in Cebu City,” Taft Properties project development head Lydwena Eco said.

Horizons 101 is a masterplanned development composed of two residential buildings that will rest on a common and connected podium. Located at the ground level, the podium will feature dining, retail, and other commercial establishments that serve to answer the needs of residents, add to the value of the development, and complete the surrounding community.

The first tower, which costs P1.9 billion to build, is scheduled for turnover to the buyers by September 2015.

TALLEST IN CEBU. Horizons 101 is a masterplanned development composed of two residential buildings. The first tower (above) costs P1.9 billion to build and is scheduled for turnover to buyers by September 2015.

There are only a few remaining units at the first tower as around 99 percent had been sold off. About 75 percent of condominium units in the 46-storey second tower, set for completion and turnover by the third quarter of 2017, had been sold as well.

“Horizons 101 is an ideal development – from planning to execution – in an ideal location. It has been meticulously planned. Its sales take-up show that the team has done a good job,” said Taft Properties president and chief operating officer Christopher G. Narciso.

Those who bought condo units are mostly locals, and Narciso describes them as the next generation of Cebu’s movers and shakers.

They are in their 30’s and 40’s and include business owners and corporate professionals belonging to middle and upper management.

“Those who invested early are now reaping the benefits,” he pointed out. A parking slot at Horizons 101 currently costs P750,000.

A group of friends with a love for good food decided to share their passion with others and came up with Yolk, a restaurant that…

1 Comment on Yolk is all-day breakfast and good coffee